Use of this site indicates acceptance of the Privacy Policy and Terms of Use.
The information on this Website is not reliable and not intended to provide tax, legal, or investment advice. Nothing contained on the Website shall be considered a recommendation, solicitation, or offer to buy or sell a security to any person in any jurisdiction.
CEO.CA members discuss high-risk penny stocks which can lose their entire value. Only risk what you can afford to lose.
© 2022 - CEO.CA Technologies Ltd.
@newswire/designated-news-release-goldmining-intersects-118 ↻
0 online
Today This week
Search Subscribe
Members of @newswire/designated-news-release-goldmining-intersects-118

Alastair Still, CEO, commented, "The 2022 drilling program has successfully discovered extensions of previously identified gold-copper porphyry mineralization at the La Garrucha target and has almost doubled the strike and depth of the system, which remains open to the southeast and at depth. The latest drill results help demonstrate the geological continuity and higher-grade core of this mineralized system. These results along with drilling from historic exploration programs will be used to initiate an updated mineral resource estimate for the La Mina Project in the fourth quarter of 2022 with the intention to complete an updated Preliminary Economic Assessment ("PEA") in 2023."

Tim Smith, VP Exploration, commented, "LME1111 provides geological continuity between the previous Bellhaven drill holes and the recently announced step out drill holes completed by GoldMining, which include intercepts of 207.95 m at 0.62 g/t AuEq in LME1107 and 431.23 m at 0.73 g/t AuEq in LME1108.  LME1111 intersected the hanging wall of the La Garrucha porphyry at the depth modelled, providing confirmation of our three-dimensional geological model and adding confidence to future mineral resource estimation including the presence of a higher-grade core of the system."

From late March through to mid-August 2022, GoldMining completed a diamond core drilling program comprising five drill holes for 3,485 m at its La Garrucha target within the La Mina Project (see Figures 1 & 2). Comprehensive assay intercepts for the entire drill program, including the last hole of program LME1111, can be found in Table 1.

LME1111 was drilled to improve confidence in the continuity of the porphyry mineral system between the previous Bellhaven drilling and the recently completed GoldMining step out drilling (see Figure 2). Additionally, LME1111, was oriented to drill orthogonally across the steep easterly dip of the overall system compared with previous Bellhaven drilling, which drilled obliquely. LME1111 intersected the core of the porphyry system providing important information about the continuity and geometry of the higher-grade portions of the porphyry system.

Geological interpretation of the La Garrucha drilling program is now underway and includes comprehensive lithological, alteration and structural logging of new core and re-logging of historic Bellhaven core. This work will be used to place the copper and gold mineralization in spatial and temporal context with the hosting La Garrucha porphyry intrusive complex and other La Mina porphyry deposits at La Cantera and Middle Zone. Metallurgical testwork, three-dimensional modelling of geology and subsequent geostatistical modelling will be completed during fourth quarter 2022 to initiate an updated pit constrained mineral resource estimate by year-end. Current plans are to complete an updated PEA for La Mina in 2023 that will include resources outlined at Middle Zone, La Cantera and La Garrucha.

Additional information regarding the La Mina Project, including existing resource estimates and historical work at the project, is set out in the technical report titled "NI 43-101 Technical Report and Preliminary Economic Assessment, La Mina Project, Antioquia, Republic of Colombia" with an effective date of January 12, 2022 ("La Mina Technical Report and PEA"), which is available on the Company's website at www.goldmining.com and under the Company's profile on www.sedar.com. 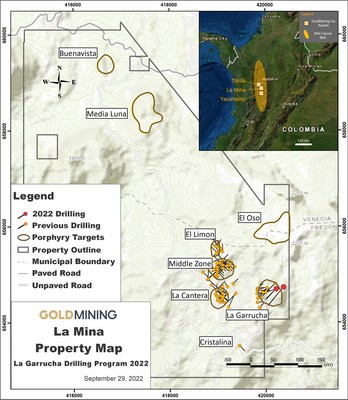 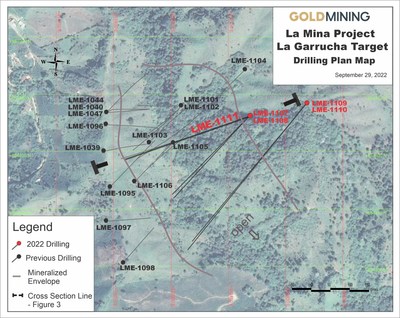 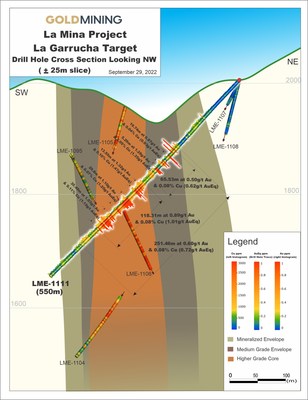 Table 1 – La Garrucha assay intercepts from the 2022 drilling program received as of September 28, 2022.

Paulo Pereira, P. Geo., President of GoldMining, has reviewed and approved the technical information contained in this news release. Mr. Pereira is a Qualified Person as defined in National Instrument 43-101 – Standards of Disclosure for Mineral Projects ("NI 43-101").

For this drill core sampling program, samples were taken from the NQ/HQ core by sawing the drill core in half, with one-half sent to ALS Colombia LTDA in Medellín for assaying and the other half retained for future reference. Sample lengths downhole range from a minimum of 0.50 m to a maximum of 2.10 m. ALS Colombia LTDA is a certified commercial laboratory located in Medellín, Antioquia, Colombia, independent of GoldMining. GoldMining has implemented a stringent quality assurance and quality-control (QA/QC) program for the sampling and analysis of drill core including insertion of duplicates, mineralized standards and blank samples for each batch of 100 samples. The gold analyses were completed by ALS Au-AA23 method (fire-assay with an atomic absorption finish on 30 grams of material). Copper analyses were completed by ALS ME-ICP61 method (four acid digest with ICP analysis).

GoldMining Inc. is a public mineral exploration company focused on the acquisition and development of gold assets in the Americas. Through its disciplined acquisition strategy, GoldMining now controls a diversified portfolio of resource-stage gold and gold-copper projects in Canada, U.S.A., Brazil, Colombia, and Peru. The Company also owns more than 20 million shares of Gold Royalty Corp. (NYSE American: GROY).

Cautionary Note to US Investors

The disclosure in this news release and referred to herein was prepared in accordance with NI 43-101 which differs significantly from the requirements of the SEC. The terms "proven mineral reserve", "probable mineral reserve" and "mineral reserves" used in this news release are in reference to the mining terms defined in the Canadian Institute of Mining, Metallurgy and Petroleum Standards (the "CIM Definition Standards"), which definitions have been adopted by NI 43-101. Accordingly, information contained in this news release providing descriptions of our mineral deposits in accordance with NI 43-101 may not be comparable to similar information made public by other U.S. companies subject to the United States federal securities laws and the rules and regulations thereunder.