Use of this site indicates acceptance of the Privacy Policy and Terms of Use.
The information on this Website is not reliable and not intended to provide tax, legal, or investment advice. Nothing contained on the Website shall be considered a recommendation, solicitation, or offer to buy or sell a security to any person in any jurisdiction.
CEO.CA members discuss high-risk penny stocks which can lose their entire value. Only risk what you can afford to lose.
© 2016 - Pacific Website Company Inc.
@newsfile/ip-resistivity-survey-defines-key-structures-at-kwai ↻
0 online
Today This week
Search Subscribe
Members of @newsfile/ip-resistivity-survey-defines-key-structures-at-kwai

Vancouver, British Columbia--(Newsfile Corp. - August 24, 2020) - Golden Goliath Resources Ltd. (TSXV GNG ) (OTC Pink: GGTHF) (FSE: GGZ) ("Golden Goliath" or the "Company") is very pleased to announce that The Induced Polarization survey on its Kwai property is now completed. The data has been interpreted by RS Middleton P.Eng and plotted along with the locations of gold grains found in basal till.

Induced Polarization (IP) and resistivity surveys have been completed on 40 lines covering the 10 km long Kwai property 100% held by Golden Goliath and located 8000 m south of the Great Bear (GBR) Dixie property. The Kwai property covers a parallel major crustal structure defined by Federal Government seismic surveys which is linked to the LP fault on the Dixie property at depth and other major faults related to the major Gold producers in Red Lake. Supplemental airborne VLF EM and magnetic surveys and geological mapping has established that the major crustal structure known as the Pakwash Fault traverses the length of the property and at least four other related shears and faults are recognized in the data. 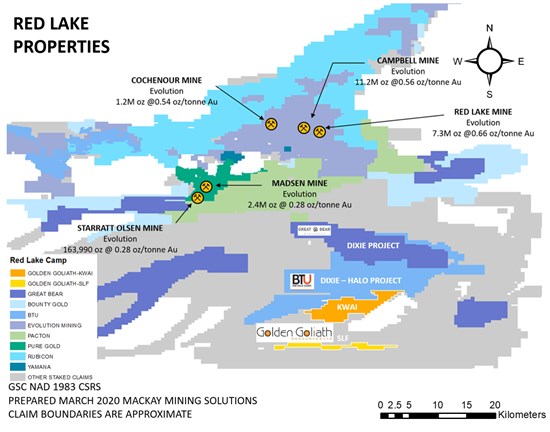 The stratigraphy along the Fault is also identical to the Great Bear Dixie project LP Zone with a basalt volcanic footwall and a parallel 800 m wide felsic tuff package hosting the LP Fault which is related to the gold zones being outlined. A large granitic Dome feature separates the two packages of volcanics on the two properties. 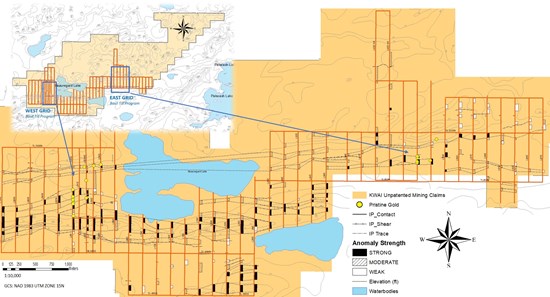 The ideal geological setting was sampled using glacial basal tills which occur beneath layers of silt and clay at the bed rock surface. However only two areas shown on the attached map could be sampled with the equipment available due to the depth of the upper clay and silt layers preventing sampling of the tills stuck to the bedrock surface. The tills samples recovered contained abundant gold grains and many were of a "Pristine" classification indicating they had not travelled any great distance but were from a nearby source perhaps as close as 500 m. Therefore the sources are in close proximity to a number of IP anomalies along the fault structures in the basalt and adjoining felsic tuffs.

The Pakwash Fault and associated structures have been glaciated by an ice sheet coming from an acute angle from the north east and as a result the dispersion of the gold grains becomes complicated being left along the wall of the valley like feature along the fault. Deeper sampling may be possible using dual tube RC drilling equipment to outline a better dispersion pattern, however sufficient drill targets have been defined by the geophysics and it has been established that there is a local gold source, therefore a diamond drilling program has been decided to occur as the next step.

Details about the gold grains found are presented in detail in previous news release dated July 7, 29, August 4 and 6th (see web site www.goldengoliath.com) and the accompanying map shows the location of the "Pristine" gold grains. The large number of IP targets will become the focus of the drill program which is expected to commence in early September.

Golden Goliath CEO Paul Sorbara, MSc., P.Geo, comments: "Well, it is all systems go! The fire to the north is out and things are back to normal in that regard. The IP results are even better than expected. We found several more parallel shears south of the main trend. They are in areas where we did not do till sampling as we did not expects such good targets there. We have a short window right now and we are taking advantage of this time. Our crew is on the ground doing some extra stripping in areas where we have found interesting boulders and drill preparation work. The more information we have before we start to drill the better for us. We intend to start drilling in early September, after the Labour Day long weekend. As I have said before, we could not ask for more at this stage. Drilling will come soon."

This news release has been reviewed by Robert S. Middleton P.Eng who is acting as QP for this phase of the exploration under the NI 43-101 requirements.

On behalf of the Board of Directors

Golden Goliath Resources Ltd. is a junior exploration company listed on the TSX Venture Exchange (symbol GNG). The Company is focused on exploring and developing the gold and silver potential of properties in the Red Lake District of Ontario. The Company also holds a 100% interest in the San Timoteo property, located in the Sierra Madre Occidental Mountains of northwestern Mexico, as well as NSR royalties on several other nearby properties.

To find out more about Golden Goliath visit our website at www.goldengoliath.com.

To view the source version of this press release, please visit https://www.newsfilecorp.com/release/62372