Use of this site indicates acceptance of the Privacy Policy and Terms of Use.
The information on this Website is not reliable and not intended to provide tax, legal, or investment advice. Nothing contained on the Website shall be considered a recommendation, solicitation, or offer to buy or sell a security to any person in any jurisdiction.
CEO.CA members discuss high-risk penny stocks which can lose their entire value. Only risk what you can afford to lose.
© 2021 - CEO.CA Technologies Ltd.
@nasdaq/fenixoro-drills-232-gt-gold-in-newly-discovered-cascada ↻
0 online
Today This week
Search Subscribe
Members of @nasdaq/fenixoro-drills-232-gt-gold-in-newly-discovered-cascada

FenixOro VP Exploration Stuart Moller commented, “We are extremely pleased with these first results of the NWC infill drill program as the higher average grades and thicknesses significantly increase resource potential on previously modeled veins. Our understanding of the Santa Teresa “vein” is also becoming much more clear: it is really a series of parallel veins within a corridor up to 15 meters wide, flanked and separated by a variably developed zone of veinlets and stockwork mineralization.”

Mr. Moller continued: “It was a significant surprise that we intersected four new veins within 150 meters of previous drill holes. The high grade Cascada vein and three new veins in the bottom of P012 add significantly to resource potential and more work is being done to include these in our formal model. Following this Phase 2 program we should be in a position to begin formal resource-definition spaced drilling on the NWC with the goal of defining a maiden resource on as many as ten veins, an increase from the four that are currently being modelled. Preparation is also underway to begin the first drill holes in the highly prospective southeastern block.”

New WNW Trending Vein Structure Identified
The newly designated “Cascada” vein was cut in P013. The intersection was 1.3m @ 23.23 g/t gold. It is different from most other veins at Abriaqui in that it has a low content of sulfides, low silver, and contains visible gold. Cascada appears to be part of a family of at least four veins which trend 290 degrees. These veins have not been mapped on surface and are known only from underground workings and the new intersection in P013. They appear intermittently between the major veins of the NWC which trend 315 degrees (Figure 1). Their geometry is not well enough understood to justify individual longitudinal sections at this point, but they appear to have higher than project-average gold grade and they offer significant upside potential to be evaluated in future drilling.

Three additional new veins were discovered in the bottom of hole P012. This “footwall series” of veins averages 1.5m in thickness with gold grades up to 19.47 g/t. (Table 2). These too are not yet well-understood geometrically and represent additional potential which will require deeper drilling to define.

Table 2 highlights the principal gold-bearing intercepts in NWC drilling to date including newly reported values for P010 - P012 and the upper part of P013. P010 was drilled to the west to cover the gap between P001 and P005 and eight significant veins were intersected. P012 was drilled at a steeper angle to test the same vein package at depth. Ten veins were intersected with the deepest still carrying high grade at the 1540 meter elevation which matches the deepest drilled mineralization in the district to date. Hole P014 (in progress) is projected to intersect the deepest veins in the NWC at the 1300 meter elevation.

Resource Development Progress
Though no formal resource calculation has been done in the project area, FenixOro presented a series of longitudinal sections supporting an early estimate of resource potential on four veins in the Press Release of March 19, 2021. The three of those sections which are part of the NWC are updated here with the new drill data and results of recent underground channel sampling. The Santa Teresa Vein system is the largest in the NWC. It is really a series of parallel veins within a corridor up to 15 meters wide flanked and separated by a variably developed zone of veinlets and stockwork mineralization. As seen in Figure 2, we now have five data points defining the potential resource block including four drill holes and a channeled interval from a mine working (see Press Release of August 6, 2021). The average grade times thickness parameter (GxT, Table 3) for these points is 53% greater than in the March 19 estimate and our degree of confidence in that number is significantly higher given the larger data set.

The yellow minimum resource potential blocks in each section are defined by the position of the drill holes and channeled interval, samples in shallow mine workings, the Cascada Fault on the southeast, and the 1500m elevation at depth. Areas of additional potential are shown with red arrows. These will be evaluated with ongoing step-out drilling laterally and at depth as indicated by the projected pierce points of the remaining Phase 2 drill holes shown in blue. The mineralization is open at depth below 1540m and the expectation is that there is significant room for resource growth downward on all veins. Hole P014 (in progress) is projected to intersect the deeper veins at about the 1300m elevation. Hole P009 from Phase 1 and visual inspection of the lower part of P013 (assays pending) indicate that the veins of the NWC continue to the southeast of the Cascada Fault and there is excellent potential for multiple mineralized veins in that direction.

Phase 2 drilling will continue with at least two more infill holes on the NWC, one infill hole on the EWC, and 4-5 holes in the highly prospective southeast license. The program is scheduled to continue into Q1 2022.

Technical Information
Stuart Moller, Vice President Exploration and Director of the Company and a Qualified Person for the purposes of NI 43-101 (P.Geo, British Colombia), has prepared or supervised the preparation of the technical information contained in this press release. Mr. Moller has more than 40 years of experience in exploration for precious and other metals including ten in Colombia and is a Fellow of the Society of Economic Geologists.

There are currently no NI 43-101 compliant resources or reserves in the project area. The analysis of drill results is intended to estimate the potential for future resources which will require significant additional drilling to define.

About FenixOro Gold Corp.
FenixOro Gold Corp is a Canadian company focused on acquiring and exploring gold projects with world class exploration potential in the most prolific gold producing regions of Colombia. FenixOro's flagship property, the Abriaqui project, is located 15 km west of Continental Gold's Buritica project in Antioquia State at the northern end of the Mid-Cauca gold belt, a geological trend which has seen multiple large gold discoveries in the past 10 years including Buritica and Anglo Gold's Nuevo Chaquiro and La Colosa. As documented in "NI 43-101 Technical Report on the Abriaqui project Antioquia State, Colombia" (December 5, 2019), the geological characteristics of Abriaqui and Buritica are similar. The report also documents the high gold grade at Abriaqui with samples taken from 20 of the veins assaying greater than 20 g/t gold. Since the preparation of this report a Phase 1 drilling program has been completed at Abriaqui resulting in a significant discovery of a high grade, “Buritica style” gold deposit. A Phase 2 drilling program has recently commenced.

FenixOro's VP of Exploration, Stuart Moller, led the discovery team at Buritica for Continental Gold in 2007-2011. At the time of its latest public report, the Buritica Mine contains measured plus indicated resources of 5.32 million ounces of gold (16.02 Mt grading 10.32 g/t) plus a 6.02 million ounce inferred resource (21.87 Mt grading 8.56 g/t) for a total of 11.34 million ounces of gold resources. Buritica began formal production in November 2020 and has expected annual average production of 250,000 ounces at an all-in sustaining cost of approximately US$600 per ounce. Resources, cost and production data are taken from Continental Gold's "NI 43-101 Buritica Mineral Resource 2019-01, Antioquia, Colombia, 18 March, 2019"). Continental Gold was recently the subject of a takeover by Zijin Mining in an all-cash transaction valued at C$1.4 billion. 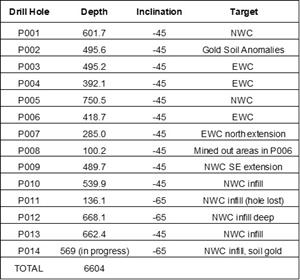 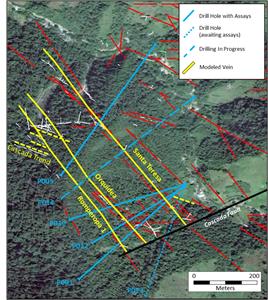 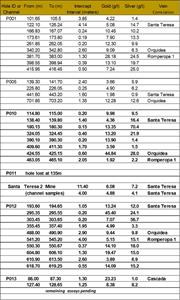 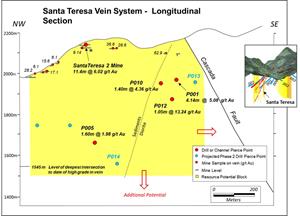 Longitudinal section along the Santa Teresa Vein system showing drilling and sampling to date with a minimum resource potential block (yellow area). The weighted average of the five data points (four drill intersections and one channeled interval) is 3.92m @ 5.76 g/t gold compared to the 3.0m @ 5.0 g/t assumed in the 3/19/2021 resource potential estimate. 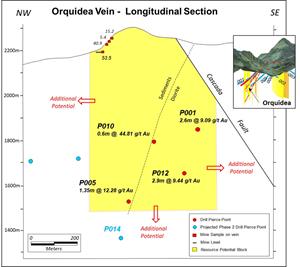 Longitudinal section along the Orquidea Vein showing drilling and sampling to date with an estimated minimum resource potential block (yellow area). The weighted average of the four drill intersections is 1.86m @ 12.68 g/t gold compared to the 2.0m @ 10 g/t assumed in the 3/19/2021 resource potential estimate. 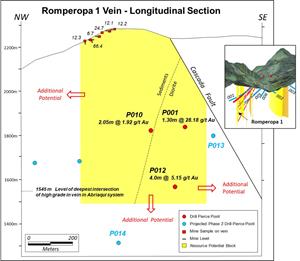 Longitudinal section along the Romperopa 1 Vein showing drilling and sampling to date with an estimated minimum resource potential block (yellow area). The weighted average of the three drill intersections is 2.45m @ 8.32 g/t gold compared to the 1.3m @ 12.0 g/t assumed in the 3/19/2021 resource potential estimate.

Comparison of current data with the resource potential estimate from the March 29, 2021 Press Release for the three principal veins of the NWC. G x T (grade x thickness) is significantly higher in the current data set on all three veins.