Use of this site indicates acceptance of the Privacy Policy and Terms of Use.
The information on this Website is not reliable and not intended to provide tax, legal, or investment advice. Nothing contained on the Website shall be considered a recommendation, solicitation, or offer to buy or sell a security to any person in any jurisdiction.
CEO.CA members discuss high-risk penny stocks which can lose their entire value. Only risk what you can afford to lose.
© 2022 - CEO.CA Technologies Ltd.
@newswire/meridian-drills-1165m-of-07-cueq-and-provides-cabaal ↻
0 online
Today This week
Search Subscribe
Members of @newswire/meridian-drills-1165m-of-07-cueq-and-provides-cabaal

NOT FOR DISTRIBUTION TO U.S. NEWS WIRE SERVICES OR FOR DISSEMINATION IN THE U.S.

LONDON, June 15, 2021 /CNW/ - Meridian Mining UK S (TSXV: MNO) (Frankfurt: 2MM) ("Meridian" or the "Company") is pleased to report further assays from its ongoing 10,000m drill program at its Cabaçal Copper-Gold camp-scale VMS project ("Cabaçal") in Mato Grosso, Brazil. Multiple zones of significant and extensive Copper ("Cu"), Gold ("Au") and Silver ("Ag") mineralisation starting at 8.0m, have been returned from the Diamond Drill Holes ("DDH"): CD-010 to CD-013 (Table 1), within and extending out from the Cabaçal Mine (Figure 1). CD-012 has confirmed high-grade Cu-Au-Ag mineralisation remains above and below the old workings2 a result that the Company considers will be replicated throughout the mine; further assays are pending. Meridian is also reporting that its modern, deep penetrating Electromagnetic ("EM") equipment is in Brazil and will be onsite shortly. Meridian's geophysics team is ready to start IP and EM surveys over its high priority VTEM targets: Cabaçal West and Cabaçal South which will then be tested by drilling. With over CAD 5.0M in the Bank and via further capital inflows from Warrants being exercised, the Company is well funded to continue delivering results.

"Today's drill results continue to reinforce the strength of the very large Copper and Gold system at Cabaçal." commented Dr Adrian McArthur, CEO and President. "Cabaçal's mineralisation starts at surface and the stacked lenses can at times, coalesce as seen in CD-013's cumulative 116.5m @ 0.7% CuEq. We started Cabaçal's resource development program based on the extensive Cu-Au mineralisation defined by BP Minerals and Rio Tinto in the 80's and 90's. Today, we are launching the exciting next stage, where the most modern IP & EM equipment will start surveying Cabaçal including the 1,800m long Cabaçal West VTEM conductor and the 1,000m south-east extension to the ECZ. Once we have refined our geophysical targets, with first results expected in late June early July, we can start drilling Cabaçal West and Cabaçal South, targeting the potential massive sulphide pile of the Cabaçal mine. Being well financed having $5.0M in cash-on-hand and more coming with the Warrant conversions, Meridian is on target for an exciting June and 3rd & 4th Quarter 2020 news flow.

Extensions to the mineral system will be surveyed by a combination of EM and IP geophysical surveys in the coming weeks. The Company's own modern Induced Polarization equipment is in the field targeting the disseminated and more brecciated styles of Cu-Au mineralization; supplementing the Company's EM equipment expected to shortly arrive in Cuiaba; with first results by late June. First IP and EM results are expected to extend mineralisation out from the mine's limits and to vector near mine targets starting with the down plunge Cabaçal West VTEM plates then proceeding to the Eastern-Copper-Zone ("ECZ") ~1000m south-eastern extension. Once the mine and near-mine upside is defined the geophysics will expand along the 16.0km long Mine Corridor zone.

The Company's program is advancing, with a combination of twin and infill drilling straddling the ECZ, Central-Copper-Zone ("CCZ") and Southern-Copper-Zones ("SCZ") (Figure 1). Over 4,000m of drilling has been completed todate. The focus is shifting slightly to initiate drilling on south-eastern and north-western extensions outwards from the mine, before moving to the priority EM targets of: Cabaçal West, Cabaçal South, and Cabaçal South-East. Rig 1 is currently testing Cabaçal NW extension geochemical anomaly (Figure 2). Assays reported to date continue to strengthen confidence in both the geological data and the potential of the deposit.

CD013 targeted the ECZ and intercepted extensive mineralisation starting at 8.0m. The hole confirms that thick high-grade shallow mineralization remains after the selective but short-lived mining in the 1980's and 1990's by BP Minerals and Rio Tinto. The results highlight the potential of the ECZ, for infill resource definition drilling.

CD-010's and CD-011's assay results from the north-western limit of the CCZ mined area, highlighted the presence of shallow layers of open Cu-Au mineralisation providing future drill targets extending to the northwest of the historical workings. 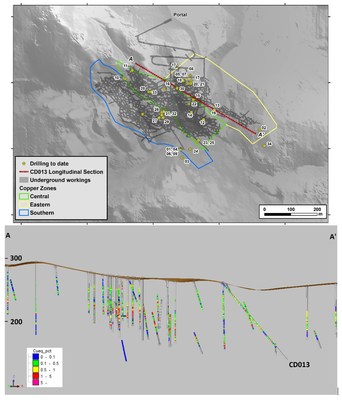 Dr. Adrian McArthur, B.Sc. Hons, PhD. FAusIMM., CEO and President of Meridian Mining as well as a Qualified Person as defined by National Instrument 43-101, has supervised the preparation of the technical information in this news release.

Stay up to date by subscribing for news alerts here: https://meridianmining.co/subscribe/

Holes have been drilled HQ through the saprolite and upper bedrock and reduced to NQ – mineralized intervals represent half NQ drill core. Samples have been analysed at the accredited SGS laboratory in Belo Horizonte. Gold analyses have been conducted by FAA505 (fire assay of a 50g charge), and base metal analysis by methods ICP40B and ICP40B_S (four acid digest with ICP-OES finish). Silver is repeated by method AAS12E. Samples are held in the company's secure facilities until dispatch and delivered by staff and commercial couriers to the laboratory. Pulps are retained for umpire testwork, and ultimately returned to the Company for storage. The Company submits a range of quality controls samples, including blanks and gold and polymetallic standards supplied by ITAK, supplementing laboratory quality control procedures.

Meridian Mining UK S is focused on the acquisition, exploration and development activities in Brazil. The Company is currently focused on resource development of the Cabaçal VMS Copper-Gold project, exploration in the Jaurú & Araputanga Greenstone belts located in the state of Mato Grosso; exploring the Espigão polymetallic project and the Mirante da Serra manganese project in the State of Rondônia Brazil.

Some statements in this news release contain forward-looking information or forward-looking statements for the purposes of applicable securities laws. These statements include, among others, statements with respect to the Company's plans for exploration, development and exploitation of its properties and potential mineralisation. These statements address future events and conditions and, as such, involve known and unknown risks, uncertainties and other factors, which may cause the actual results, performance or achievements to be materially different from any future results, performance or achievements expressed or implied by the statements. Such risk factors include, among others, failure to obtain regulatory approvals, failure to complete anticipated transactions, the timing and success of future exploration and development activities, exploration and development risks, title matters, inability to obtain any required third party consents, operating risks and hazards, metal prices, political and economic factors, competitive factors, general economic conditions, relationships with strategic partners, governmental regulation and supervision, seasonality, technological change, industry practices and one-time events. In making the forward-looking statements, the Company has applied several material assumptions including, but not limited to, the assumptions that: (1) the proposed exploration, development and exploitation of mineral projects will proceed as planned; (2) market fundamentals will result in sustained metals and minerals prices and (3) any additional financing needed will be available on reasonable terms. The Company expressly disclaims any intention or obligation to update or revise any forward-looking statements whether as a result of new information, future events or otherwise except as otherwise required by applicable securities legislation.

The Company cautions that it has not completed any feasibility studies on any of its mineral properties, and no mineral reserve estimate or mineral resource estimate has been established. Geophysical exploration targets are preliminary in nature and not conclusive evidence of the likelihood of a mineral deposit.