16 Jun 2021, 09:01
@newswire Mantaro Silver Corp. Appoints Donna Humphreys as Vice-President Corporate Development and as a Member of the Board of Directors $9TZ $MSLV
show more ▾

Use of this site indicates acceptance of the Privacy Policy and Terms of Use.
The information on this Website is not reliable and not intended to provide tax, legal, or investment advice. Nothing contained on the Website shall be considered a recommendation, solicitation, or offer to buy or sell a security to any person in any jurisdiction.
CEO.CA members discuss high-risk penny stocks which can lose their entire value. Only risk what you can afford to lose.
© 2016 - Pacific Website Company Inc.
@newswire/mantaro-silver-corp-introduces-high-grade-sampling ↻
0 online
Today This week
Search Subscribe
Members of @newswire/mantaro-silver-corp-introduces-high-grade-sampling

There are over 12 kilometers of intermediate sulphidation veins and vein splays arranged into a number of key target zones: the Tembladera Vein System, San Jorge Vein System, Kelly Vein, Maribel Vein, Paquita Vein and Rosario Vein.  The system has never been drilled tested and exploitation of silver was limited to two areas of the San Jorge and Tembladera veins.

The Tembladera Vein system is located in the central southern part of the concessions. The system comprises the east-west tending Tembladera Vein and the northeast-southwest striking Tembladera 1 and 2 veins. Collectively the Tembladera Veins have a cumulative strike length of at least 4 km. Veins dip steeply (78° to 88°) to the south and average between 0.7 to 2.0 m in width. Outcropping veins are strongly oxidized, crudely banded and strongly brecciated, and often weather recessively due to high base metal sulphide content. Veins are pervasively oxidized to at least 50 m vertical depth and display strong hydrothermal brecciation and minor cataclastic brecciation in underground drives. Secondary manganese oxides are common in weathered portions of the veins. Sulphide mineralization is common in the lower workings where it forms clots and crude bands. Quartz is the dominant gangue mineral, rhodocrosite and pyrite are common accessories. Economic minerals include argentite, sphalerite and galena, and native silver.

The Company collected 133 surface channel samples across the Tembladera veins. Assays returned grades ranging from <5 g/t Ag to 798 g/t Ag, many assays were above 150 g/t Ag. These assays results are considered highly significant given the extensively weathered nature of outcropping veins, which also explains the low base metal sulphide tenor.

Twenty-one underground channel samples were taken within accessible drives. The average silver grade for all samples was 1149 g/t Ag over an average sample width of 0.45 m, silver grades ranged from <5 g/t to > 10,000 g/t Ag. The average base metals for samples was 2.23 % Pb (<0.5 % Pb  to > 20 % Pb) and 1.18 g/t Zn (<0.1% to 9.1%). Small scale historical production was conducted over a vertical interval of approximately 160 m. Five drifts were developed along the vein from portals in the valley side, mineralized material was extracted by stoping upwards.

The San Jorge vein is located in the southern part of the Santas Gloria Silver Property and is hosted in Rimac and Huarochiri Group volcano-clastic rocks. The San Jorge system has a strike length of approximately 3 km, strikes broadly east-west, and dips steeply (78° to 85°) to the north. On the surface, the San Jorge vein can be traced via colonial workings and outcrop for over 3 km. Veins form resistant outcrops that are between 1 to 2 m wide. Oxidation is pervasive at surface and extends to depths of between 50 to 100 metres in historical underground workings, where the vein is between 1 to 2 m wide and weakly brecciated. Black manganese oxides are common in the weathered portions of the vein. Sulphide mineralization is common in the lower workings where it forms clots and crude bands. Quartz is the dominant gangue mineral, rhodocrosite and pyrite are common accessories. Economic minerals include argentite, sphalerite and galena, and native silver.

The Company collected 36 surface channel samples across the San Jorge vein. Assay results returned average grades of 280 g/t Ag, ranging from < 5 g/t to 2500 g/t Ag. The average vein width was 0.9 m, but the vein swells to 5 m wide in some sections that have not yet been sampled.

Ninety underground channel samples were taken from level two and three of the historical San Jorge workings. The average grade across all samples was 520 g/t Ag, 0.96 % Pb and 0.67 % Zn. Samples had an average width of 0.43 m and ranged in grade from < 5 g/t to 4100 g/t Ag, <0.1 % to 9.7 % Pb and <0.1 % to 4.2 % Zn. Small scale historical production was conducted over a vertical interval of approximately 110 m. Three drifts were developed along the vein from portals in the valley side, mined material was extracted by stoping upwards.

The Kelly Vein crops out approximately 1 km north of the Tembladera Vein system. The vein is only exposed at surface where it presents as a steeply dipping quartz-dominant vein which ranges between 1 m and 4 m wide. The eastern half of the vein strikes broadly east-west and is hosted within the Rimac Group, to the west the vein rolls around to a northeast-southwest orientation and is hosted by the Huarochiri Group.

The Company collected 82 surface channel samples across the Kelly vein and associated vein splays. Assay results returned average grades of 2.3 g/t Au over an average 0.80 m, ranging < 0.05 g/t to 56.3 g/t Au. Silver and base metal values were of low tenor, which together with the quartz-dominant and sulphide-poor nature of the vein, and the presence of saccharoidal and cryptocrystalline quartz suggests low sulphidation affinity.

The Maribel vein crops out in the north of the Santas Gloria Silver Property over a strike length of almost 1 km. It is most likely hosted within the Rimac Group, but the area is covered by a thin veneer of Quaternary sediments and the bedrock geology is poorly understood. The Mirabel vein was never worked historically and is only exposed at surface where it is pervasively oxidised. It is generally between 1 to 1.5 m wide and steeply dipping. Hanging wall alteration extends up to 5 metres from the vein.

The Paquita vein crops out in the north of the Santas Gloria Silver Property over a strike length of almost 1 km. It bifurcates into two sub-parallel veins in its western half. The Paquita vein is most likely hosted within the Rimac Group — but the area is covered by a thin veneer of Quaternary sediments and bedrock geology is poorly understood. At surface the Paquita vein is pervasively oxidised, generally between 1 to 3 m wide (locally up to 5 m wide) and steeply dipping. The vein is quartz-dominant, crudely banded and strongly brecciated. Hanging wall alteration extends up to 2 to 5 m from the vein as quartz stringers and veinlets, and areas of clay alteration. Several historical artisanal workings extracted material to a vertical depth of approximately 50 m where banded sulphides are abundant.

The Rosario vein crops out between the Kelly and Paquita veins and shares a similar northeast-southwest strike. It can be traced discontinuously as quartz vein outcrops and small artisanal workings over a strike length of approximately 2 km. The Rosario vein is between 0.5 to 3 m wide and is sub-vertical.

The vein is strongly silicified and brecciated — becoming increasingly banded to the southwest. Iron and manganese oxides are abundant as matrix between clasts. 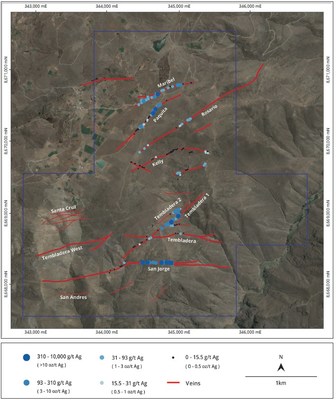 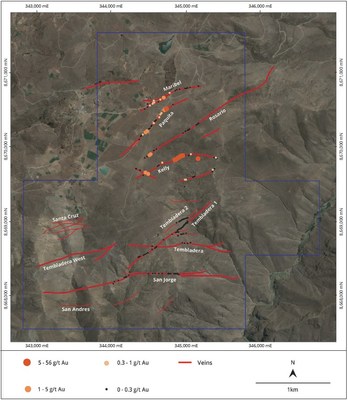 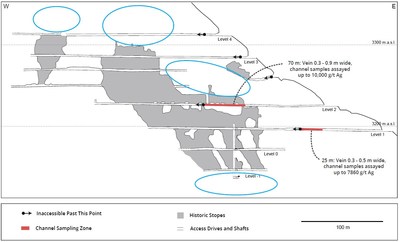 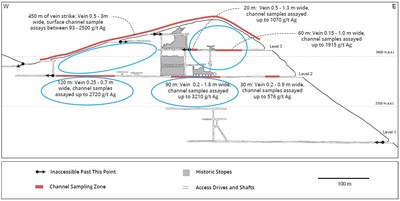 All assays were subject to quality control measures appropriate for assay of reconnaissance channel samples taken in surface outcrop and underground exposures of intermediate epithermal vein mineralization.  Samples were delivered to ALS Lima in individually numbered bags sealed with unique single-use clip-lock seals — ensuring that chain of custody was maintained. Sample preparation, sub-sampling protocol and analysis followed industry-recognized standards of best practice for the style of mineralization and type of sample.

Samples were submitted in batches of 20 comprising 18 samples, a field blank and a CRM (certified reference material). Samples were prepared by ALS Lima who then couriered pulps to ALS Loughrea (Ireland) for analysis. Field blanks and CRM's assayed within tolerance limits.

Information set forth in this news release contains forward-looking statements that are based on assumptions as of the date of this news release. These statements reflect management's current estimates, beliefs, intentions and expectations. They are not guarantees of future performance. The Company cautions that all forward looking statements are inherently uncertain and that actual performance may be affected by a number of material factors, many of which are beyond the Company's control. Such factors include, among other things: risks and uncertainties relating to Company's limited operating history and the need to comply with environmental and governmental regulations. Accordingly, actual and future events, conditions and results may differ materially from the estimates, beliefs, intentions and expectations expressed or implied in the forward looking information. Except as required under applicable securities legislation, the Resulting Issuer undertakes no obligation to publicly update or revise forward-looking information.