Use of this site indicates acceptance of the Privacy Policy and Terms of Use.
The information on this Website is not reliable and not intended to provide tax, legal, or investment advice. Nothing contained on the Website shall be considered a recommendation, solicitation, or offer to buy or sell a security to any person in any jurisdiction.
CEO.CA members discuss high-risk penny stocks which can lose their entire value. Only risk what you can afford to lose.
© 2021 - CEO.CA Technologies Ltd.
@newswire/group-eleven-starts-drill-campaign-at-zone-3-and-4 ↻
0 online
Today This week
Search Subscribe
Members of @newswire/group-eleven-starts-drill-campaign-at-zone-3-and-4

VANCOUVER, BC, July 22, 2021 /CNW/ - Group Eleven Resources Corp. (TSXV: ZNG) (OTC: GRLVF) (FRA: 3GE) ("Group Eleven" or the "Company") is pleased to announce that mobilization has begun for exploration drilling at Zones 3 and 4 of the Carrickittle zinc prospect ("Carrickittle") at its 100%-owned PG West project ("PG West"), Ireland. In addition, a ground magnetics survey at Carrickittle is nearing completion and a second rig has been added to complete drilling at regional prospects at PG West.

"We are excited to start drilling at Zones 3 and 4 given this part of Carrickittle hosts good evidence of prospectivity, namely the largest known fault within the Carrickittle area, associated intense dolomitization and several historic drill holes containing not only zinc and lead, but also copper - which in Ireland, typically suggests proximity to higher-grade zinc mineralization," stated Bart Jaworski, CEO. "Results from the current drill campaign and the ground magnetics survey, should significantly help us select the best drill targets as we start drilling the 1 km extension to the north, later this year."

Mobilization commenced yesterday for drilling at Zones 3 and 4 of the Carrickittle prospect, PG West project in Ireland (see Exhibit 1). Several diamond drill holes are planned as part of this phase, depending on drill results. In addition, a ground magnetics survey (aimed at identifying prospective faults) was carried out over a 1.5 square kilometre area north of, and including, Zones 1-4 at Carrickittle. Data from the survey is currently being processed, with results and interpretations expected to be released over the next few weeks. Drilling at Zones 3 and 4 plus the ground magnetics survey will be used to select optimal targets within the 1 km northern extension to be drilled later this year.

In order to complete remaining drilling at regional targets and allow timely re-start of drilling at Carrickittle, the Company added a second drill rig. Drilling at Croom and Ballywire has now been completed with the last holes at Denison and Oola currently underway. An update on these regional drill programs is expected over the next few weeks, once assays are received and interpretations are completed. 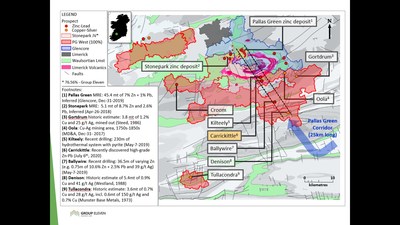