Use of this site indicates acceptance of the Privacy Policy and Terms of Use.
The information on this Website is not reliable and not intended to provide tax, legal, or investment advice. Nothing contained on the Website shall be considered a recommendation, solicitation, or offer to buy or sell a security to any person in any jurisdiction.
CEO.CA members discuss high-risk penny stocks which can lose their entire value. Only risk what you can afford to lose.
© 2016 - Pacific Website Company Inc.
@newswire/group-eleven-commences-drilling-at-stonepark-zinc-project ↻
0 online
Today This week
Search Subscribe
Members of @newswire/group-eleven-commences-drilling-at-stonepark-zinc-project

VANCOUVER, BC, Sept. 10, 2020 /CNW/ - Group Eleven Resources Corp. (TSXV: ZNG) (OTC: GRLVF) (FRA: 3GE) ("Group Eleven" or the "Company") is pleased to announce that it has commenced drilling at the Stonepark zinc project ("Stonepark") in the Republic of Ireland. Stonepark is a joint venture between Group Eleven (76.56% interest) and Arkle Resources PLC (23.44% interest). Plans for follow-up drilling at the Company's Carrickittle zinc prospect ("Carrickittle") located on the 100%-interest PG West zinc project in Ireland are nearing completion and will be announced over the next few weeks.

"We are excited to start drilling at Stonepark and look forward to updating the market on plans for follow-up drilling at Carrickittle in a few weeks," stated Bart Jaworski, CEO. "The Limerick basin is proving to be a very prospective zinc-lead camp and we look forward to progressing exploration in the near-term."

Other Ongoing and Upcoming Drill Programs

At Carrickittle, the Company recently announced the discovery of high-grade zinc-lead mineralization (hole G11-2840-04 intersected 10.3 metres of 14.6% zinc, 5.0% lead (19.6% combined) and 43 g/t silver, interpreted to be approximately true width, starting at 56.3 metres downhole; see news release dated July 6th, 2020). Plans for follow-up drilling are nearing completion and will be announced over the next few weeks.

On its regional targets within the remainder of its PG West project (see news release dated May 28th, 2020), Group Eleven has now finished drilling and results are expected over the coming few weeks, once laboratory analyses are received, compiled and interpreted. 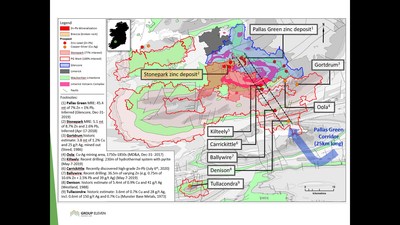 The Company is also pleased to note that it has been granted prospecting licenses covering the Tullacondra copper-silver prospect, located in the general PG West project area (see Exhibit 1 and news release dated April 22nd, 2020).

This press release contains forward-looking statements within the meaning of applicable securities legislation. Such statements include, without limitation, statements regarding the future results of operations, performance and achievements of the Company, including the timing, content, cost and results of proposed work programs, the discovery and delineation of mineral deposits/resources/reserves and geological interpretations. Although the Company believes that such statements are reasonable, it can give no assurance that such expectations will prove to be correct. Forward-looking statements are typically identified by words such as: believe, expect, anticipate, intend, estimate, postulate and similar expressions, or are those, which, by their nature, refer to future events. The Company cautions investors that any forward-looking statements by the Company are not guarantees of future results or performance, and that actual results may differ materially from those in forward looking statements as a result of various factors, including, but not limited to, variations in the nature, quality and quantity of any mineral deposits that may be located. All of the Company's public disclosure filings may be accessed via www.sedar.com and readers are urged to review these materials, including the technical reports filed with respect to the Company's mineral properties.