Use of this site indicates acceptance of the Privacy Policy and Terms of Use.
The information on this Website is not reliable and not intended to provide tax, legal, or investment advice. Nothing contained on the Website shall be considered a recommendation, solicitation, or offer to buy or sell a security to any person in any jurisdiction.
CEO.CA members discuss high-risk penny stocks which can lose their entire value. Only risk what you can afford to lose.
© 2022 - CEO.CA Technologies Ltd.
@newswire/canada-nickel-identifies-new-method-for-accelerated ↻
0 online
Today This week
Search Subscribe
Members of @newswire/canada-nickel-identifies-new-method-for-accelerated

The lab scale test program demonstrates that this accelerated carbon capture process could allow Crawford tailings to absorb enough CO2 to achieve Net Zero carbon emissions within 36 hours, and generate up to 21 tonnes of CO2 credits per tonne of nickel produced within just six days, rather than the multiple months involved in existing passive tailings approaches.  At Canada Nickel's Crawford Project, this translates into an average of approximately 710,000 tonnes of CO2 credits per year and 18 million total tonnes of CO2 credits over the Preliminary Economic Assessment ("PEA") life-of-mine.

Mark Selby, Chair and CEO of Canada Nickel commented, "These lab scale test results demonstrate a potentially transformative process to turn a nickel mine into a net generator of carbon credits rather than a generator of carbon emissions.  Our active and accelerated process has the potential to operate at least 8-12 times faster than current passive approaches, delivering carbon capture at a multiple of what industry leaders are currently able to achieve.  Our process also allows easier quantification and verification of the amount of carbon captured."

Canada Nickel's Crawford Project is hosted in ultramafic rock, which naturally absorbs and sequesters CO2. The potential to actively capture and sequester carbon was a key consideration in Canada Nickel's acquisition of the 42 km2 of target ultramafic rocks in the Timmins area which could anchor a zero-carbon industrial cluster near Timmins. The challenge has been to develop a process that speeds up the naturally occurring carbon absorption process. Canada Nickel has developed a simple active process that utilizes tailings as generated in the milling process and injects a concentrated source of CO2 for a brief period of time.  This novel process for accelerated mineral carbonation is called In Process Tailings Carbonation or IPT Carbonation, which fixes CO2 geologically while the tailings are still in the processing circuit, rather than after they have been finally deposited.

While Canada Nickel's IPT Carbonation process has only been demonstrated on a lab scale and on a limited number of samples, the Company believes that, given its relative simplicity, this process could be scaled up with availability of concentrated (rather than atmospheric) sources of CO2. This CO2 could potentially be delivered by downstream processing of Crawford concentrates, a wide range of industrial processing activities, green hydrogen production, carbon capture facilities, or natural gas power generation.  The process clearly demonstrates the potential to produce NetZero NickelTM and NetZero CobaltTM for the EV industry, NetZero IronTM and chromium for the stainless steel industry and generate substantial carbon credits during the process. The Company believes that the need for a concentrated source of CO2 for this process and the substantial CO2 capture capacity potential of its ultramafic land position could form the basis for an entire zero carbon industrial cluster in the Timmins region.

IPT Carbonation
The IPT Carbonation process utilizes tailings directly from the mineral processing circuit and conditions them with CO2 for a brief period of time.  After this conditioning, the tailings achieved the Net Zero carbon capture target in less than 36 hours and achieved gross carbon capture rates of at least 26 tonnes of CO2 / tonne of nickel (5 times the amount necessary to achieve Net Zero metal production) in just 6 days.  During this time, the rate of capture was 8 to 12 times faster than a lab scale passive approach. (see Figures 1a, 1b, 2, 3).  Both samples tested with IPT Carbonation have achieved or surpassed the complete theoretical carbonation of the ultramafic mineral brucite, which is significant as the capacity of brucite to sequester carbon, at Crawford alone, is estimated to be more than 13 million tonnes of CO2 over the estimated life of the project. The experimental method and results for IPT Carbonation were initially completed at XPS, Expert Process Solutions, a Glencore Company, and the mechanism was then reproduced at a second independent lab, Kingston Process Metallurgy, adding confidence to the process. No further information is being provided on the method at this time and work is underway to test a wide range of variables to optimize the process. 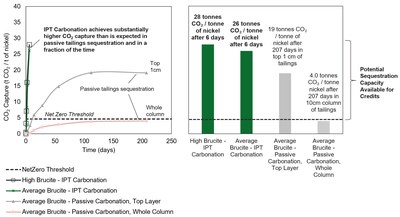 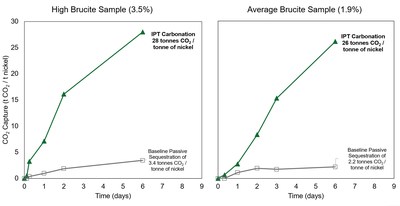 Based on mineralogy data captured in the Crawford PEA, the average brucite concentration of samples characterized in the resource was 2.0%.   These initial lab scale results suggest that carbon capture beyond the theoretical maximum in brucite is possible.  Canada Nickel is working towards incorporating the brucite content into the block model as an estimate for the total carbon capture potential of the project in the feasibility study.

Validation and Measurement of CO2 Credits
IPT Carbonation, which is an active process, has benefits over passive mineral carbon capture as the method for quantifying and verifying CO2 capture is expected to be much simpler. Using a standard carbon balance in the mineral processing facility, the CO2 captured from IPT Carbonation can be quantified before tailings are discharged into the permanent tailings storage facility such that carbon offsets can be quantified in real time as part of a standard metallurgical accounting system. Canada Nickel expects industry standards to be developed for quantifying CO2 capture through passive methods as well.

Qualified Person and Data Verification
Arthur G. Stokreef, P.Eng (ON), Manager of Process Engineering & Geometallurgy, Canada Nickel Company, and a "qualified person" as such term is defined by National Instrument 43-101, has reviewed and approved the technical information in this news release on behalf of Canada Nickel Company Inc.

About Canada Nickel
Canada Nickel Company Inc. is advancing the next generation of nickel-sulphide projects to deliver nickel required to feed the high growth electric vehicle and stainless steel markets. Canada Nickel Company has applied in multiple jurisdictions to trademark the terms NetZero Nickel™, NetZero Cobalt™ and NetZero Iron™ and is pursuing the development of processes to allow the production of net zero carbon nickel, cobalt, and iron products. Canada Nickel provides investors with leverage to nickel in low political risk jurisdictions. Canada Nickel is currently anchored by its 100% owned flagship Crawford Nickel-Cobalt Sulphide Project in the heart of the prolific Timmins-Cochrane mining camp. For more information, please visit www.canadanickel.com.

Cautionary Statement Concerning Forward Looking Statements
This press release contains certain information that may constitute "forward-looking information" under applicable Canadian securities legislation. Forward looking information includes, but is not limited to, the carbon capture approach could allow production of Net Zero nickel and generation of an additional  tonnes of CO2 credits per tonne of nickel produced after offsetting all emissions, the  potential to turn nickel mine into a generator of carbon credits rather than generator of carbon emissions, the production of estimated average of 710,000 tonnes of carbon credits annually and 18 million total tonnes of CO2 credits over expected life of mine at Crawford, the ability to monetize carbon credits, the ability to quantify carbon capture, emission estimates, the brucite content of the deposit, the scalability of the process, the metallurgical results, the timing and results of the feasibility study, the results of Crawford's PEA, including statements relating to net present value, future production, estimates of cash cost, proposed mining plans and methods, mine life estimates, cash flow forecasts, metal recoveries, estimates of capital and operating costs, timing for permitting and environmental assessments, realization of mineral resource estimates, capital and operating cost estimates, project and life of mine estimates, ability to obtain permitting by the time targeted, size and ranking of project upon achieving production, economic return estimates, the timing and amount of estimated future production and capital, operating and exploration expenditures and potential upside and alternatives. Readers should not place undue reliance on forward-looking statements.

Forward-looking statements involve known and unknown risks, uncertainties and other factors which may cause the actual results, performance or achievements of Canada Nickel to be materially different from any future results, performance or achievements expressed or implied by the forward-looking statements. The PEA results are estimates only and are based on a number of assumptions, any of which, if incorrect, could materially change the projected outcome. There are no assurances that Crawford will be placed into production. Factors that could affect the outcome include, among others: the actual results of development activities; project delays; inability to raise the funds necessary to complete development; general business, economic, competitive, political and social uncertainties; future prices of metals or project costs could differ substantially and make any commercialization uneconomic; availability of alternative nickel sources or substitutes; actual nickel recovery; conclusions of economic evaluations; changes in project parameters as plans continue to be refined; accidents, labour disputes, the availability and productivity of skilled labour and other risks of the mining industry; political instability, terrorism, insurrection or war; delays in obtaining governmental approvals, necessary permitting or in the completion of development or construction activities; mineral resource estimates relating to Crawford could prove to be inaccurate for any reason whatsoever; additional but currently unforeseen work may be required to advance to the feasibility stage; and even if Crawford goes into production, there is no assurance that operations will be profitable.