Use of this site indicates acceptance of the Privacy Policy and Terms of Use.
The information on this Website is not reliable and not intended to provide tax, legal, or investment advice. Nothing contained on the Website shall be considered a recommendation, solicitation, or offer to buy or sell a security to any person in any jurisdiction.
CEO.CA members discuss high-risk penny stocks which can lose their entire value. Only risk what you can afford to lose.
© 2022 - CEO.CA Technologies Ltd.
@newsfile/lion-one-extends-the-urw3-lode-a-key-component-of ↻
0 online
Today This week
Search Subscribe
Members of @newsfile/lion-one-extends-the-urw3-lode-a-key-component-of

by @newsfile on 18 Nov 2022, 09:30
Lion One Extends the URW3 Lode, a Key Component of The 500 Zone Feeder, with Several Bonanza-Grade Drill Intercepts at Its Tuvatu Gold Mine, Fiji

North Vancouver, British Columbia--(Newsfile Corp. - November 18, 2022) - Lion One Metals Limited (TSXV: LIO) (OTCQX: LOMLF) (ASX: LLO) ("Lion One" or the "Company") is pleased to announce that the Company has produced additional bonanza-grade drilling intercepts and expanded the Deep Feeder Zone 500 by increasing the vertical extent of the URW3 Lode by at least 180 m at its high-grade Tuvatu Alkaline Gold Project in Fiji.

The results from these holes confirm a significant increase in the vertical extension and continuity of the URW3 mineralized zone, which occurs on the western margin and as part of the high-grade feeder zone. The new drill intercepts, in conjunction with results from the previously drilled TUG-138 drill hole, correspond to a significant increase in grade with depth, as numerous bonanza-grade intercepts return gold assay values ranging from 100-800 g/t gold. Additionally, this drilling confirms an increase in the vertical extent of this distinct portion of the 500 zone feeder by at least 180 m. The high-grade feeder zone remains open at depth.

Overall, the drill results reported here are consistent with a persistent, substantial upside being realized at Tuvatu resulting from the aggressive deep drilling adopted by the company since the initial discovery of the deep feeder zone by hole TUDDH-500, in July of 2020.

Definition of a new portion of deep, high-grade feeder material that is separate from, and parallel to, the high-grade zone previously defined by TUG-141/TUDDH-601/TUDDH-608

Technical advisor to the Company, Dr. Quinton Hennigh commented: "This drilling is leading us closer and closer to the main conduits of this remarkable high-grade gold system. Without question, URW3 is turning into a big branch of the 'tree.' The junction between it and the rest of the 500 Zone looks like it forms a pipe, perhaps the one that has allowed mineralizing fluids to flow upwards. If we chase this down with further drilling, I think it could lead us to parts of the system in which considerable gold was deposited. We must keep drilling."

Drill holes TUDDH-613 and 616, and TUG-149 were designed to follow up the previously announced discovery of the very high-grade zone of Au mineralization discovered by hole TUG-141 (Read June 6, 2022 News Release), and subsequently followed up by holes TUDDH-601 (Read August 15, 2022 News Release), and TUDDH-608 (Read Nov. 7, 2022 News Release). Holes TUG-149, TUDDH-613, and TUDDH-616 all intersected a distinct zone, located approximately 60 m to the west of the TUG-141 structural corridor, that corresponds to the down-dip projection of the URW3 lode (Figure 1). The substantial bonanza-grade intercepts (Figure 2) in these drill holes, along with the high-grade intercepts in a previously reported hole TUG-138 (Read June 6, 2022 News Release) of 23.14 g/t Au over 3.0 m including 118.6 g/t Au over 0.3 m, collectively define a significant vertical extension to URW3 of at least 180 m.

Sr. Vice-President of Exploration, Sergio Cattalani states: "This is yet another major advance in our continuing efforts to follow and delineate what is increasingly understood to be the principal high-grade feeder at Tuvatu. While we believe we are rapidly defining major portions of the feeder structures, we are also confident that we are in no way near its base. This feeder is developing into a bonanza-grade zone defined by multiple major channel-ways that appear to coalesce. With the TUG-141/TUDDH-601/608 zone, and now the URW3 zone, we have at least two, distinct but likely interconnected corridors of continuous high-grade mineralization to follow up. We're just getting started…"

Figure 1 below represents a 15 m thick longitudinal section along the dip-extent of the URW3 lode, and illustrates the effect of TUG-149, TUDDH-613, and TUDDH-616 on what appears to be the downward extension of this important structure. The TUDDH-613 and TUDDH-616 traces are relatively short because the holes are oblique to the section. TUG-149 appears as a longer continuous trace as it remained at a very low angle to the dip of the URW3 lode. This is also reflected by the long interval of 12.9m of 12.89 g/t Au from 254.4-267.3m depth. TUG-138 (red diamonds) was a pre-existing hole, but in light of the most recent drill results, is now interpreted to also form part of the downward extension of the URW3 lode. 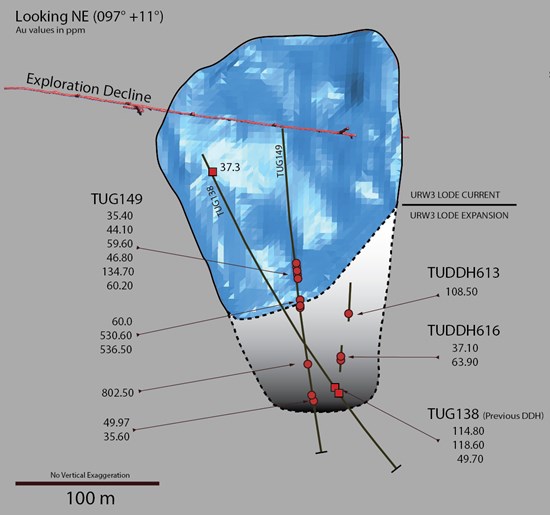 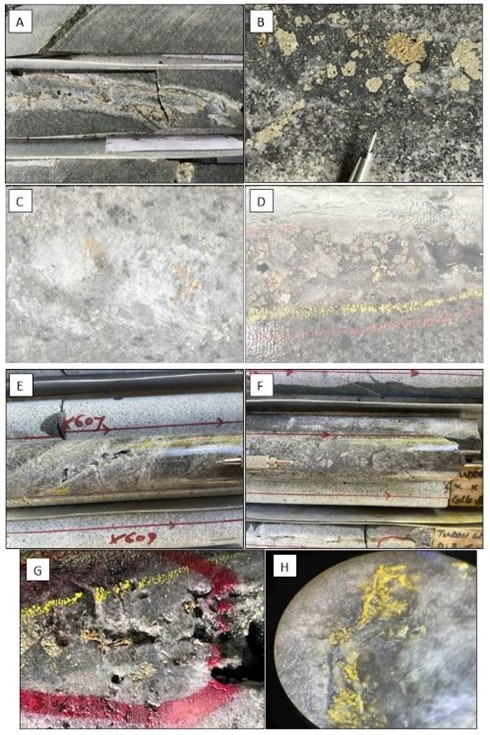 To view an enhanced version of Figure 2, please visit:
https://images.newsfilecorp.com/files/2178/144799_fig2lion.jpg.

Table 1: Includes the location and other information for listed DDH holes

About Tuvatu
The Tuvatu Alkaline Gold Project is located on the island of Viti Levu in Fiji. The January 2018 mineral resource for Tuvatu as disclosed in the technical report "Technical Report and Preliminary Economic Assessment for the Tuvatu Gold Project, Republic of Fiji", dated September 25, 2020, and prepared by Mining Associates Pty Ltd of Brisbane Qld, comprises 1,007,000 tonnes indicated at 8.50 g/t Au (274,600 oz. Au) and 1,325,000 tonnes inferred at 9.0 g/t Au (384,000 oz. Au) at a cut-off grade of 3.0 g/t Au. The technical report is available on the Lion One website at www.liononemetals.com and on the SEDAR website at www.sedar.com.

Qualified Person
In accordance with National Instrument 43-101 - Standards of Disclosure for Mineral Projects ("NI 43- 101"), Sergio Cattalani, P.Geo, Senior Vice President Exploration, is the Qualified Person for the Company and has reviewed and is responsible for the technical and scientific content of this news release.

QAQC Procedures
Lion One adheres to rigorous QAQC procedures above and beyond basic regulatory guidelines in conducting its sampling, drilling, testing, and analyses. The Company utilizes its own fleet of diamond drill rigs, using PQ, HQ and NQ sized drill core rods. The drill core is logged and split by Lion One personnel on site. Samples are delivered to and analyzed at the Company's geochemical and metallurgical laboratory in Fiji. Duplicates of all samples with grades above 0.5 g/t Au are both re-assayed at Lion One's lab and delivered to ALS Global Laboratories in Australia (ALS) for check assay determinations. All samples for all high-grade intercepts are sent to ALS for check assays. All samples are pulverized to 80% passing through 75 microns. Gold analysis is carried out using fire assay with an AA finish. Samples that have returned grades greater than 10.00 g/t Au are then re-analyzed by gravimetric method. For samples that return greater than 0.50 g/t Au, repeat fire assay runs are carried out and repeated until a result is obtained that is within 10% of the original fire assay run. Lion One's laboratory can also assay for a range of 71 other elements through Inductively Coupled Plasma Optical Emission Spectrometry (ICP-OES), but currently focuses on a suite of 9 important pathfinder elements. All duplicate anomalous samples are sent to ALS labs in Townsville QLD and are analyzed by the same methods (Au-AA26, and Au-GRA22 where applicable). ALS also analyses 33 pathfinder elements by HF-HNO3-HClO4 acid digestion, HCl leach and ICP-AES (method ME-ICP61).

About Lion One Metals Limited
Lion One's flagship asset is 100% owned, fully permitted high-grade Tuvatu Alkaline Gold Project, located on the island of Viti Levu in Fiji. Lion One envisions a low-cost high-grade underground gold mining operation at Tuvatu coupled with exciting exploration upside inside its tenements covering the entire Navilawa Caldera, an underexplored yet highly prospective 7km diameter alkaline gold system. Lion One's CEO Walter Berukoff leads an experienced team of explorers and mine builders and has owned or operated over 20 mines in 7 countries. As the founder and former CEO of Miramar Mines, Northern Orion, and La Mancha Resources, Walter is credited with building over $3 billion of value for shareholders.

On behalf of the Board of Directors of Lion One Metals Limited
"Walter Berukoff", Chairman and CEO

To view the source version of this press release, please visit https://www.newsfilecorp.com/release/144799