Use of this site indicates acceptance of the Privacy Policy and Terms of Use.
The information on this Website is not reliable and not intended to provide tax, legal, or investment advice. Nothing contained on the Website shall be considered a recommendation, solicitation, or offer to buy or sell a security to any person in any jurisdiction.
CEO.CA members discuss high-risk penny stocks which can lose their entire value. Only risk what you can afford to lose.
© 2022 - CEO.CA Technologies Ltd.
@newsfile/kinross-earns-70-interest-at-laguna-gold-property ↻
0 online
Today This week
Search Subscribe
Members of @newsfile/kinross-earns-70-interest-at-laguna-gold-property

Sudbury, Ontario--(Newsfile Corp. - March 11, 2021) - Rockcliff Metals Corporation (CSE: RCLF) (FSE: RO0, WKN: A2H60G) ("Rockcliff" or the "Company") is pleased to announce that an affiliate of Kinross Gold Corporation ("Kinross") has earned a 70% interest in the Laguna/Lucky Jack/Puella Bay properties ("Laguna") in Snow Lake, Manitoba. Rockcliff retains a 30% participating interest in Laguna. Pursuant to the July 2018 option agreement, Kinross has earned a 70% interest in Laguna by completing expenditures in excess of the required C$5,500,000 ahead of the third year anniversary of the six year option agreement.

"Having Kinross earn in so early on their option to the level of forming a Joint Venture on the Laguna Property confirms our belief of the high gold prospectivity of this land package. We look forward to seeing more encouraging results from this year's program currently underway." said Alistair Ross, President and CEO of Rockcliff.

Laguna is located in the Flin Flon-Snow Lake Greenstone Belt which is host to volcanogenic massive sulphide (copper-zinc) and primary gold mines and deposits. Laguna hosts the historic Rex-Laguna gold mine, Manitoba's first and highest-grade former gold mine. Discovered in 1914, periodic gold mining up to 1940 produced over 60,000 ounces of gold with an average grade of 16.7 g/t.

Since 2018, Kinross has completed 48 holes totaling approximately 16,470 metres. Some of the higher-grade drill holes previously press released include:

For the 2021 season, Kinross will continue to follow up on the success of the previous programs while also identifying the potential of other targets. The program will focus primarily on all three claim blocks; Laguna, Lucky Jack and Puella Bay (see Figure 1): 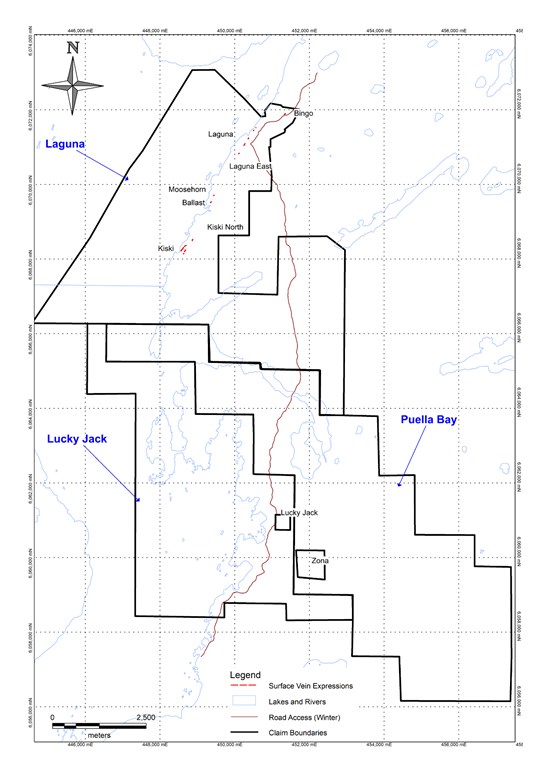 Option Grant and Terms of Engagement with Oak Hill Financial

As disclosed on February 2, 2021, the Company engaged Oak Hill Financial Inc. to provide investor relations services to the Company in compliance with regulatory guidelines. The consideration for services if $8,500/month plus applicable taxes as well as the grant of 200,000 stock options. The options carry a $0.15 strike price and an 18-month term. The minimum term of the engagement is a 2-month commitment, renewable monthly thereafter.

One hole was completed on the T3 Anomaly totalling 1,010 m. The hole intersected semi-massive to massive sulphides that explained the conductive source of the anomaly. The massive sulphides consisted of pyrrhotite and did not have any appreciable copper-bearing sulphides. Assays have been received and no further drilling is warranted.

Ken Lapierre P.Geo., VP Exploration of Rockcliff, a Qualified Person in accordance with Canadian regulatory requirements as set out in NI 43-101, has read and approved the scientific and technical information that forms the basis for the disclosure contained in this press release.

Rockcliff is a Canadian resource development and exploration company, with a +1,000 tonne per day leased processing and tailings facility as well as several advanced-stage, high-grade copper and zinc dominant VMS deposits in the Snow Lake area of central Manitoba, Canada. The Company is the largest junior landholder in the largest Paleoproterozoic VMS district in the world, hosting high grade mines and deposits containing copper, zinc, gold and silver. The Company's extensive portfolio of properties totals approximately 4,500 square kilometres and includes seven of the highest-grade, undeveloped VMS deposits and five gold properties in the Flin Flon -Snow Lake Greenstone Belt. Rockcliff has over 71% insider/institutional ownership and two separate joint ventures with Hudbay and with Kinross.

To view the source version of this press release, please visit https://www.newsfilecorp.com/release/76853