Use of this site indicates acceptance of the Privacy Policy and Terms of Use.
The information on this Website is not reliable and not intended to provide tax, legal, or investment advice. Nothing contained on the Website shall be considered a recommendation, solicitation, or offer to buy or sell a security to any person in any jurisdiction.
CEO.CA members discuss high-risk penny stocks which can lose their entire value. Only risk what you can afford to lose.
© 2022 - CEO.CA Technologies Ltd.
@newsfile/endurance-increases-the-size-of-the-reliance-gold-project ↻
0 online
Today This week
Search Subscribe
Members of @newsfile/endurance-increases-the-size-of-the-reliance-gold-project

Vancouver, British Columbia--(Newsfile Corp. - October 25, 2022) - Endurance Gold Corporation (TSXV: EDG) (OTC PINK: ENDGF) (FSE: 3EG) (the "Company") is pleased to announce that it has acquired an option to earn a 100% ownership in the Sanchez Group of ten mineral claims totaling 856 hectares (the "Sanchez Claims"). The Sanchez Claims adjoin the eastern boundary of the Company's Reliance Gold Project in southern British Columbia, on which the Company is currently focussing its diamond drilling activities. The Reliance Gold Project is located 4 kilometers ("km") east of the village of Gold Bridge, and 10 km north of the historic Bralorne-Pioneer Gold Mining Camp which has produced over 4 million ounces of gold.

Highlights of the transaction include:

Under the terms of the letter agreement with the private vendor, the Company can earn a 100% interest in the Sanchez Claims for:

Any Shares to be issued will be subject to a four-month hold period on issuance as per the policies of the TSX Venture Exchange.

The most significant known gold prospect on the Sanchez Claims is the Bill Miner prospect with two historic short pre-War adits from which grab samples collected in 1988 returned up to 9.4 grams per tonne gold. In addition, recent forestry activities have opened new ankerite altered areas associated with structural deformation. This setting is similar to the recent discoveries by the Company at the Eagle and Imperial zones on the Royal Shear Trend.

Endurance Gold Corporation is a company focused on the acquisition, exploration and development of highly prospective North American mineral properties with the potential to develop world-class deposits.

Neither the TSX Venture Exchange nor its Regulation Services Provider (as that term is defined in the policies of the TSX Venture Exchange) accepts responsibility for the adequacy or accuracy of this news release. This news release may contain forward looking statements based on assumptions and judgments of management regarding future events or results that may prove to be inaccurate as a result of factors beyond its control, and actual results may differ materially from the expected results.

The Reliance Project B.C. - Location of Sanchez Claims with respect to the Olympic and Reliance Options 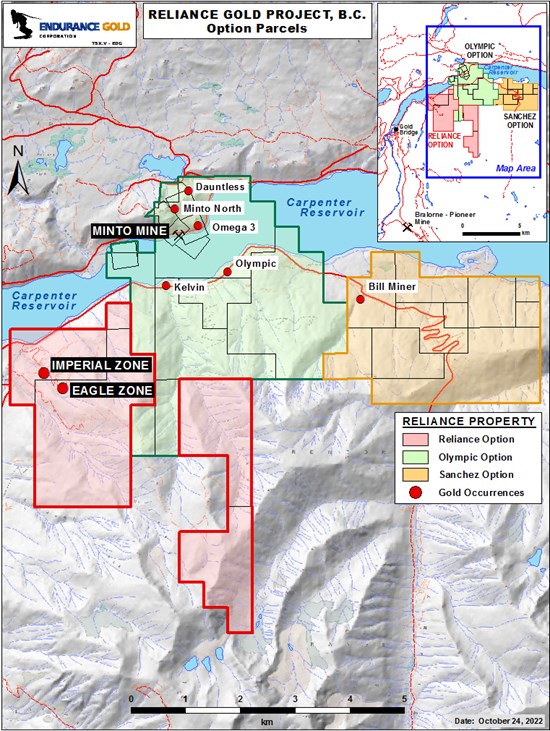 To view the source version of this press release, please visit https://www.newsfilecorp.com/release/141809