1 Jun 2022, 09:00
@nasdaq VR intersects 205 ft of silver and gold mineralization in its first hole at Amsel; plans are now underway for the second leg of drilling this summer $VRR $VRRCF $5VR-F

Use of this site indicates acceptance of the Privacy Policy and Terms of Use.
The information on this Website is not reliable and not intended to provide tax, legal, or investment advice. Nothing contained on the Website shall be considered a recommendation, solicitation, or offer to buy or sell a security to any person in any jurisdiction.
CEO.CA members discuss high-risk penny stocks which can lose their entire value. Only risk what you can afford to lose.
© 2022 - CEO.CA Technologies Ltd.
@nasdaq/vr-wraps-up-the-2020-field-season-at-reveille-silver-copper ↻
0 online
Today This week
Search Subscribe
Members of @nasdaq/vr-wraps-up-the-2020-field-season-at-reveille-silver-copper

by @nasdaq on 21 Dec 2020, 11:00
VR Wraps up the 2020 Field Season at Reveille Silver-Copper Property in Nevada, With Planning Underway for Upcoming Winter Work

VANCOUVER, British Columbia, Dec. 21, 2020 (GLOBE NEWSWIRE) -- VR Resources Ltd. (TSX.V: VRR, FSE: 5VR; OTCBB: VRRCF), the "Company", or “VR”, is pleased to provide a year-end update for a busy year of exploration in the field at the Company’s Reveille silver-copper property located along the eastern margin of the Walker Lane mineral belt in west-central Nevada.

Our crew has just returned from the final stint of field work for 2020. Rock and soil samples are shown on Figure 1, in the context of the core targets which have emerged from our work in 2020; see the previous news release dated Nov. 24th for a bulleted list of the array of exploration surveys completed this summer at Reveille.

The Company expects to receive in January all of the geochemical results from the soil and rock sampling completed in November and December.

The Company is currently evaluating a state-of-the-art 3D DCIP geophysical survey for late January. The survey will, more or less, mimic the area covered by the soil grid and rock samples shown in Figure 1, and cover the magnetic, EM and gravity anomalies also shown on Figure 1. In particular, the DCIP survey will map the pyrite related to the intense quartz veining, silicification and potassium alteration in the halo of the magnetic anomaly shown in Photo 1, and the pyrite related to jasperoid leaching south of Coyote Pup shown in Photo 2.

Upon the integration in January of all project data, drill hole locations already laid out based on data in-hand will be refined, finalized and prioritized. Planning for the permitting of a reconnaissance-style RC drill program is already underway, and we expect to complete the permit application some time in January for a drill program later next winter. The low elevation, subdued topography, well-established roads, nearby water sources and near-surface modeling of targets below a thin valley cover will facilitate a cost-effective drill program and next step for Reveille.

From VR’s CEO Dr. Michael Gunning: “Field work and geophysics have been ongoing since June, and it is fair to say that Reveille has advanced more quickly than we expected. Our objective has been to identify a new and previously unexplored target for the core of the Reveille silver-copper CRD mineral system, beyond the individual showings of high-grade silver-copper mineralization exposed on the hills of the south Reveille range. We believe that we have that target in the large magnetic anomaly and specific EM conductor in the covered valley on the western flank of the range. And while we recognized the gold at Reveille when we began our exploration, it was not our focus, but field work has shown that a robust gold event is present, and that a high amplitude gravity feature might represent a low volume but high value, pipe-like core to this gold-bearing fluid. Both of these target areas for the complimentary metal systems at Reveille are covered and have never been tested in the 150 years of prospecting in the hills to the east.”

“As we approach year-end, I would like to take this opportunity to thank our shareholders, new and old, for their support through 2020. With a strong treasury in hand, we look forward to a busy 2021, including several planned drill programs with the potential to deliver threshold value creation events for this Company. We look forward to providing updates as our planning unfolds in the new year, and in the mean time I want to convey on behalf of VR best wishes to our share holders for a joyful holiday season and healthy New Year.”

VR submits all surface grab samples and/or drill core samples collected from Nevada-based exploration projects for geochemical analysis to the ALS Global (“ALS”) laboratory in Reno, Nevada. Sample preparation is completed in Reno. Analytical work is completed at the ALS laboratories located in Vancouver, BC., including ICP-MS analyses for base metals and trace elements, and gold determination by atomic absorption assay. Analytical results are subject to industry-standard and NI 43-101 compliant QAQC sample procedures at the laboratory, as described by ALS.

Technical information for this news release has been prepared in accordance with the Canadian regulatory requirements set out in National Instrument 43-101. Justin Daley, P.Geo., Principal Geologist at VR and a non-independent Qualified Person oversees and/or participates in all aspects of the Company’s mineral exploration projects and has reviewed the content of this news release. The Company’s CEO, Dr. Michael Gunning, P.Geo., is also a non-independent Qualified Person.

About the Reveille Property

The Reveille property is located approximately 90 km’s east of Tonopah, Nevada. Access is via Highway 6, with local roads and trails in and around the property itself.

The Reveille property consists of 66 mineral claims in one contiguous block covering 1,344 acres (544 hectares) over an area of approximately 2 x 3 km’s. The property is on federal land administered by the BLM, and are outside of the BLM’s broadly defined area of sage grouse protection. There are no underlying annual lease payments on the property, nor are there any joint venture or carried interests on the property. There is an industry-standard royalty attached to the property, with a standard buy-back provision to VR.

VR is an established junior exploration company focused on greenfields opportunities in copper and precious metals (TSX.V: VRR; Frankfurt: 5VR; OTCBB: VRRCF). VR is the continuance of 4 years of active exploration in Nevada by a Vancouver-based private company. The diverse experience and proven track record of its Board in early-stage exploration, discovery and M&A is the foundation of VR. The Company focuses on underexplored, large-footprint mineral systems in the western United States and Canada, and is well financed for its exploration strategies and corporate obligations. VR owns its properties outright, and evaluates new opportunities on an ongoing basis, whether by staking or acquisition.

This press release contains forward-looking statements. Forward-looking statements are typically identified by words such as: believe, expect, anticipate, intend, estimate, postulate and similar expressions or are those which, by their nature, refer to future events. Forward looking statements in this release include “The gold jasperoid is believed to from late in the evolution of the high temperature, based metal CRD system ……”, “we expect to complete the permit application some time in January for a drill program later next winter“, and “VR evaluates new opportunities on an ongoing basis, whether by staking or acquisition.”

Photo accompanying this announcement are available at 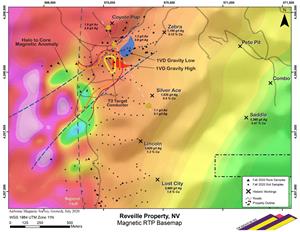 Rock and soil samples collected on the western flank of the Reveille property in November, 2020, by VR Resources, plotted on the RTP magnetic base map derived from the high-resolution airborne EM survey completed in July. Assays shown at showings are from VR sampling in June, 2020. The two dashed lines outline the northeast-southwest fold axis and structural corridor mapped by VR this summer which controls silver-copper mineralization at Reveille. Geological mapping in December of the sparse outcrops in the valley pediment on the western flank of the Reveille range. This is a quartz latite porphyry with intense sericite alteration, disseminations of pyrite boxworks, stockworks of quartz veinlets with limonite after pyrite, and local limonite cemented breccia. The outcrop is where the three rock samples are shown in Figure 1 in the northern part of the alteration halo to the core magnetic anomaly at Reveille. Jasperoid breccia from the central part of the 600 m northwest-southeast gold trend shown on Figure 1 between Silver Ace and Coyote Pup showings; it is the sample with 1.3 g/t gold and 0.6 g/t silver. The jasperoid consists of hematite stained, decalcified and decarbonized dolomite breccia fragments, and displays acid-leaching textures and a colloform-crustiform banding matrix of pink-hued chalcedonic silica.