Use of this site indicates acceptance of the Privacy Policy and Terms of Use.
The information on this Website is not reliable and not intended to provide tax, legal, or investment advice. Nothing contained on the Website shall be considered a recommendation, solicitation, or offer to buy or sell a security to any person in any jurisdiction.
CEO.CA members discuss high-risk penny stocks which can lose their entire value. Only risk what you can afford to lose.
© 2016 - Pacific Website Company Inc.
@nasdaq/vr-confirms-breccia-pipe-at-g1-gold-target-at-reveille ↻
0 online
Today This week
Search Subscribe
Members of @nasdaq/vr-confirms-breccia-pipe-at-g1-gold-target-at-reveille

by @nasdaq on 19 May 2021, 09:00
VR confirms breccia pipe at G1 gold target at Reveille, extends drilling, and expands the property based on a new 3D DCIP anomaly

VANCOUVER, British Columbia, May 19, 2021 (GLOBE NEWSWIRE) -- VR Resources Ltd. (TSX.V: VRR, FSE: 5VR; OTCBB: VRRCF), the "Company,” or “VR,” is pleased to provide an update on the ongoing exploration at its Reveille silver-copper and gold property in the Walker Lane gold-silver mineral belt in west-central Nevada.

Figure 1 shows the new IP anomaly in the covered and unexplored valley west of the Reveille range, the location of drill hole RVD21-001 just completed on the G1 gravity low anomaly, and the three RC holes located immediately to the west which are planned for next week to test the root of the breccia pipe intersected at G1.

Photo 1 and Photo 2 show drill core rubble which illustrates the nature of the breccia pipe intersected from top to bottom in the 110 m drill hole just completed at RVD21-001, starting at surface. Salient features included:

The new IP anomaly shown in Figure 1 is robust. The survey included 6 lines and 84 receiver stations on an equant 150 m station grid which generated 84,451 chargeability data points for the 3D inversion models. The Company has extended both the grid and the property farther west as a result. Salient features of the anomaly:

Figure 2 also shows the locations of the four holes completed earlier this spring for the Phase I RC program (1,325 metres in total). They were collared primarily on magnetic, EM and structural features. The Company has received only a small portion of geochemical assays to date, but expects to have full results from more than 800 samples in the coming weeks, in conjunction with fully processed and interpreted data from the hyperspectral scanning of RC chips used for the mapping of alteration minerals.

From VR’s CEO, Dr. Michael Gunning, “For our shareholders who have been following Reveille for the past year and who know that our goal has been to apply modern mineral deposit models and new exploration technologies to look for the center of the overall Carlin/CRD mineral system at Reveille, we believe the large and data-robust IP anomaly in Figure 1 is exactly that; the source and the driver for the numerous historic and high grade silver-copper workings in the hills, but located in the covered and previously unexplored valley to the west.

Our expansion of both the property and the IP grid farther west demonstrate our conviction for that potential. Planning for the additional IP work is underway, and we hope to have it completed at the end of May.

We continue down the path of building out Phase II of the drilling at Reveille once we have all geochemistry in hand and interpreted from the first phase of drilling, and now, complete 3D modeling of an expanded DCIP survey westward from the new IP anomaly in the valley. We plan to complete Phase II drilling some time this summer.

In the meantime, our decision to extend the drilling of the G1 gravity low for a gold-bearing jasperoid pipe speaks to our conviction of what we saw in the drill core rubble over the past few weeks; indeed, ground conditions that are tough for the drillers are commonly good for the geologists. We relate the textures and mineral assemblages evident in the drill core photos we show in this news release to the gold-silver-arsenic-antimony-mercury-barium multi-element geochemistry described for the G1 target in our previous news release of April 14th.

Overall, we believe that this G1 drill hole, as difficult as it was to complete, proves the potential for the superposition of a Carlin-style gold fluid system on the CRD silver-copper system at Reveille, with gold-bearing jasperoid breccia hosted on the same regional-scale structures and caldera margin faults as the silver and copper. VR endeavours to bring modern mineral deposit modeling and state-of-the-art exploration technologies to historic and proven districts like Reveille in order to “turn up something new”, and one can see in Figure 1 how the new 3D-array DCIP technology sheds new light on targeting the roots of the G1 breccia pipe for sulfide with gold.

We look forward to providing further updates as our data come in and our drilling advances this summer.”

VR is exploring the covered valley on the western flank of the range because it has never been previously explored or drilled as the potential source and overall driver of the high-grade silver-copper mineralization at Reveille during the past 140 years of prospecting which has focused on the high-grade showings exposed in the hills of the Reveille range to the east.

An array of new geochemical data from rock samples at showings and grid-based soil samples provide element ratio vectors which indicate that the source area to the overall mineral system at Reveille is westward, towards the Kawich Caldera margin (Figure 1). VR is focused squarely on drill-testing new geophysical and structural targets along the range front and in the covered valley immediately to the west for proximal, high temperature silver-copper mineralization, and potentially for a superimposed Carlin-style gold mineral system that is hosted in a diatreme breccia with jasperoid and hosted by the same structures that control the CRD silver-copper fluids.

completed at the BV laboratories located in Vancouver, BC., includes ICP-MS analyses for base metals and trace elements, while gold determination is done at the Sparks, NV lab by fire assay atomic absorption spectrometry. Analytical results are subject to industry-standard and NI 43-101 compliant QAQC sample procedures at the laboratory, as described by BV, and with standard, duplicate and blank samples inserted internally by VR.

Technical information for this news release has been prepared in accordance with the Canadian regulatory requirements set out in National Instrument 43-101. Justin Daley, P.Geo., Exploration Manager & Chief Geologist at VR and a non-independent Qualified Person oversees and/or participates in all aspects of the Company’s mineral exploration projects and has reviewed the content of this news release. The Company’s CEO, Dr. Michael Gunning, P.Geo., is also a non-independent Qualified Person.

About the Reveille Property

The Reveille property is located approximately 90 km’s east of Tonopah, Nevada. Access is via Highway 6, with local roads and trails in and around the property itself.

The Reveille property consists of 78 mineral claims in one contiguous block covering 1,586 acres (642 hectares) over an area of approximately 2 x 3 km’s. The property is on federal land administered by the BLM, and are outside of the BLM’s broadly defined area of sage grouse protection. There are no underlying annual lease payments on the property, nor are there any joint venture or carried interests on the property. There is an industry-standard royalty attached to the property, with a standard buy-back provision to VR.

VR is an established junior exploration company focused on greenfields opportunities in copper and precious metals (TSX.V: VRR; Frankfurt: 5VR; OTCBB: VRRCF). VR is the continuance of 4 years of active exploration in Nevada by a Vancouver-based private company. The diverse experience and proven track record of its Board in early-stage exploration, discovery and M&A is the foundation of VR. The Company focuses on underexplored, large-footprint mineral systems in the western United States and Canada, and is well financed for its exploration strategies and corporate obligations. VR owns its properties outright, and evaluates new opportunities on an ongoing basis, whether by staking or acquisition.

The Company continues its normal course of business in 2021 within the framework of modified exploration programs in response to the COVID-19 pandemic, with the goal of ensuring the health and safety of staff and project personnel.

Photo 2 accompanying this announcement is available at https://www.globenewswire.com/NewsRoom/AttachmentNg/b1978eaa-a7f4-49b2-9079-eff7138d4819 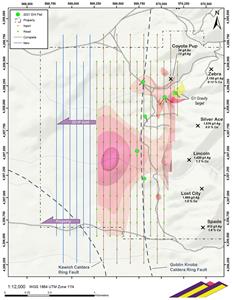 Figure 1. Location of the new IP anomaly derived from the 3D-array DCIP geophysical survey completed at Reveille in March, and the expansion of both the IP grid and the property farther to the west as a result. Shown also are the 5 drill holes completed to date at Reveille by VR, and the three holes shown with red arrows that are planned for next week to test the new IP anomalies at the root of the breccia pipe now confirmed at G1. Drill holes are also shown in Figure 2, for reference. 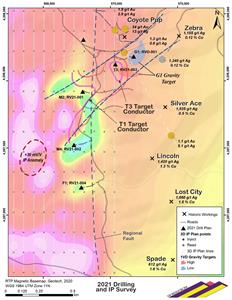 Figure 2. Location of the new IP anomaly shown in Figure 1 plotted on an RTP magnetic base map derived from a high-resolution airborne EM survey completed in July, 2020. Assays shown at workings are from VR sampling in June, 2020. The two dashed lines outline the northeast-southwest fold axis mapped by VR which controls silver-copper mineralization at the historic showings in the hills. Also shown are the 5 drill holes completed to date by VR in 2021, with locations also shown in Figure 1 for cross-reference. 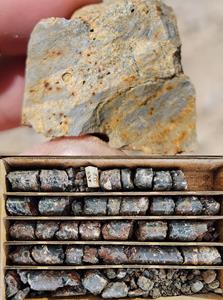 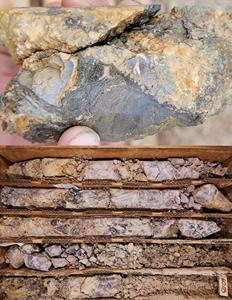