Use of this site indicates acceptance of the Privacy Policy and Terms of Use.
The information on this Website is not reliable and not intended to provide tax, legal, or investment advice. Nothing contained on the Website shall be considered a recommendation, solicitation, or offer to buy or sell a security to any person in any jurisdiction.
CEO.CA members discuss high-risk penny stocks which can lose their entire value. Only risk what you can afford to lose.
© 2016 - Pacific Website Company Inc.
@nasdaq/significant-new-soil-anomaly-identified-in-southeastern ↻
0 online
Today This week
Search Subscribe
Members of @nasdaq/significant-new-soil-anomaly-identified-in-southeastern

by @nasdaq on 10 May 2021, 08:01
Significant New Soil Anomaly Identified in Southeastern Block at Abriaqui, Becomes Major Target For Phase 2 Drilling

TORONTO, May 10, 2021 (GLOBE NEWSWIRE) -- FenixOro Gold Corp (CSE:FENX, OTCQB:FDVXF, Frankfurt:8FD) has completed a second round of soil sampling in the highly prospective Southeast block of its Abriaqui project. The area has historically returned very high grade gold values from multiple veins and includes a magnetic anomaly coincident with one of the best soil areas. FenixOro geologists recently expanded the soil sampling grid to cover more of the known vein and magnetic trends. The results are extremely promising and as a result, this previously undrilled block will receive more attention in the Phase 2 drilling program that is currently being mobilized.

“This is an exciting development for the Company and highlights yet another positive surprise as we continue to gain a clearer understanding of this undrilled target area at Abriaqui,” stated FenixOro CEO John Carlesso. “With at least 600 meters in length on surface showing greater than 1 g/t gold in soils, the principal anomaly is very significant. In areas drilled to date, most soil anomalies on surface have correlated with new vein discoveries at depth. Given the significant soil anomalies, high grade samples from many historically worked veins of up to 146 g/t gold, and a magnetic anomaly coincident with a soil anomaly not associated with known veins, we believe there is tremendous potential in the Southeast block and we are keen to test this area with the drill in Phase 2.”

Based on drilling to date, soil anomalies are proving to be a significant and reliable indicator of shallowly buried mineralization at Abriaqui. New veins were found in virtually all areas drilled in Phase 1 which were underlain by gold-anomalous soils. The best example was in the area of hole P003 where 24 veins >1 g/t gold were intersected in the area of a large soil anomaly where only eight veins had previously been mapped on surface (see Press release dated February 22, 2021).

The southeastern block has a similar geologic setting to the main vein area drilled in Phase 1 (Figure 1). A sequence of subvertical, northwest and east-west trending, high grade gold-bearing veins have a similar mineralogical and geochemical signature. The veins have been traced vertically for a minimum 1200 meters from the highest topographic elevation on the property at 2770 meters to the deepest drill intercept at the 1540m elevation with the high grade gold potential still open below that depth.

Gold results from a preliminary soil grid in the southeast were reported in the press release dated August 19, 2020. Figure 1 shows these results along with the new grid expansion to the south. Most known veins are in areas of gold-anomalous soils but there are many areas where significant soil anomalies are not explained by known mineralization. In the Phase 1 drill area to the northwest, new veins were discovered under many areas of 100+ parts per billion gold in soils. Similar anomalous areas in the southeast are represented by the yellow, orange, and red samples in Figure 1. The most obvious anomaly is a 600m continuous east-west trend, open to the east, of >1 g/t gold in soil which appears to correspond to a mapped sequence of E-W and NW-trending veins. A second anomaly in the southern part of the grid is not explained by any known mineralization. As noted in the Press Release of October 22, 2020, it is coincident with a magnetic high which is open to the south beyond the current geophysical grid.

The Southeast block is highly prospective as it contains more than 20 mapped veins which have been exploited for decades in numerous small mines. The great advantage is that it is the topographically highest part of the property package with all known mineralization being exposed above the 2300 meter elevation. This means that all veins in the area have a minimum 800-1200 meter vertical range of prospectivity.

The block is significantly underexplored due to limited road access and steep terrain but the drill being mobilized can be transported by helicopter. Figure 1 shows five holes totaling up to 2500 meters which are the pricipal candidates for an expanded Phase 2 program. They target the two principal soil anomalies and many of the known vein systems. The drill has a capacity of 1000+ meters and will provide a good view of the upper 500-700 meters of the geological system with a series of holes angled at -45 degrees. The southeast block will be drilled following the initial 4000 meters in the main vein area.

The full B soil horizon is sampled and bagged on site. Following strict chain of custody protocols, the samples are driven to the ISO 17025:2017 certified ALS Laboratory sample preparation facility in Medellin and ALS ships the prepared pulps to their assay laboratory in Lima, Peru. Blanks, duplicates, and certified reference standards totaling 15% of the total samples are inserted into the sample stream. To date, no material quality control issues have been detected. For soil samples gold is analyzed by fire assay with 30 gram charges with an atomic absorption finish. Additional elements are analyzed by ICP with appropriate follow-up for over- limits..

The comparison between Abriaqui and the nearby Buritica project in the “About FenixOro Gold Corp.” section below is meant only to indicate the similarities between the two in terms of geological setting. FenixOro does not imply that exploration results and/or economic characteristics of a potential future mine at Abriaqui will be similar to those seen at Buritica.

FenixOro Gold Corp is a Canadian company focused on acquiring gold projects with world class exploration potential in the most prolific gold producing regions of Colombia. FenixOro’s flagship property, the Abriaqui project, is located 15 km west of Continental Gold’s Buritica project in Antioquia State at the northern end of the Mid-Cauca gold belt, a geological trend which has seen multiple large gold discoveries in the past 10 years including Buritica and Anglo Gold’s Nuevo Chaquiro and La Colosa. As documented in “NI 43-101 Technical Report on the Abriaqui project Antioquia State, Colombia” (December 5, 2019), the geological characteristics of Abriaqui and Buritica are very similar. The report also documents the high gold grade at Abriaqui with samples taken from 20 of the veins assaying greater than 20 g/t gold. A Phase 2 drilling program has commenced at Abriaqui following the completion of Phase 1 drilling, surface and underground geological mapping and sampling, as well as a preliminary magnetometry survey. 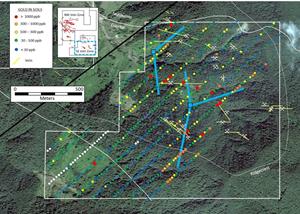 Southeast block showing gold-in-soil data and the preliminary Phase 2 dill plan. All Phase 1 drilling was done in the NW Vein Zone shown in the inset map.