Use of this site indicates acceptance of the Privacy Policy and Terms of Use.
The information on this Website is not reliable and not intended to provide tax, legal, or investment advice. Nothing contained on the Website shall be considered a recommendation, solicitation, or offer to buy or sell a security to any person in any jurisdiction.
CEO.CA members discuss high-risk penny stocks which can lose their entire value. Only risk what you can afford to lose.
© 2021 - CEO.CA Technologies Ltd.
@nasdaq/repeat-american-pacific-mining-doubles-tuscarora ↻
0 online
Today This week
Search Subscribe
Members of @nasdaq/repeat-american-pacific-mining-doubles-tuscarora

The Company also announces high-grade rock chip and grab samples collected from the newly expanded land package at its Tuscarora Gold Project (the “Tuscarora Project”). A total of 135 samples were collected from several targets, ten of which returned Bonanza grades of over 34 grams per tonne (g/t) gold (Au), including a sample of 21,032 g/t Au (676.19 ounces per US ton) and 38,820 g/t silver (Ag) (1248 ounces per US ton) or 5.9% precious metals content, from surface at the Grand Prize Target.

Assays from a previous drill program at American Pacific’s existing Tuscarora claims returned high-grade intercepts as high as 4.57 metres of 127.08 g/t Au, including 1.52 m of 368.31 g/t Au from the South Navajo Zone and 1.52 metres of 52.37 g/t Au from the East Pediment Zone. (See Tuscarora Project page for a complete list of assay results).

The surface exposed mineralized veins on the newly acquired claims extend onto American Pacific’s existing claims where mineralization is under gravel cover. The surface exposure lends itself to surface sampling as an effective exploration targeting tool. Evaluation of priority targets is underway in advance of a drill program targeted to commence late 2021 at the newly expanded Tuscarora project.

The team at Ubica has done an excellent job negotiating and consolidating these claims. This will be the first time the consolidated Tuscarora district will see extensive modern exploration.

“This very important acquisition adds significant value to our Tuscarora Project,” stated American Pacific President, Eric Saderholm. “These samples show the bonanza grades that these veins can host, and importantly, these high-grade values are broadcast throughout the property and not along one single vein. This suggests the potential to greatly expand upon mineralization we have discovered in the past and map the full vein extent across this large property package in advance of drill campaign later this year, or early in 2022. Using this data we will update our 3D model and begin the permitting process to commence a Q4, 2021 drill program.”

The Company hosted a Zoom Webinar Wednesday, to discuss this latest transaction, as well as provide an update on recent activities at each of the Company’s other projects.  Investors may watch the webinar playback by clicking the link below:

Pursuant to the terms of the Agreement, upon the closing of the Transaction, American Pacific will acquire the 77 claims at Tuscarora totaling 1,031 acres in consideration for: (i) the issuance of 3,700,000 common shares of the Company (the “Payment Shares”) to Ubica and (ii) a cash payment of $800,000. The Payment Shares will be subject to voluntary hold periods, with 25% of the Payment Shares released on the closing date and an additional 25% released every 6 months thereafter until all Payment Shares have been released.

The Transaction is subject to customary closing conditions.

Tuscarora is located in northern Nevada, 70km northwest of Elko and 20km west of the Jerritt Canyon Mine. It is a low-sulphidation epithermal system with multiple structurally controlled veins identified at surface. Extensive shallow and vertical drilling, testing for near-surface mineralization for heap leach processing was done during the 1980s and historical exploitation dates back to early 20th century via a series of vertical shafts; however, depth was limited by the water table. Two distinct deposit types exist at Tuscarora, including high Ag/Au ‘Silver Zone’ in the northeast with narrow alteration and low Ag/Au ‘Gold Zone’ in the south and southwest with widespread alteration.

Technical aspects of this press release have been reviewed and approved by Phil Mulholland, P.Geo and Eric Saderholm, P.Geo., the designated Qualified Persons (QP) under NI 43-101.

American Pacific Mining Corp. is a precious metals explorer focused on opportunities in the Western United States. The Company's flagship asset is the high-grade, past-producing Madison Copper-Gold project in Montana, under option to joint venture with Kennecott Exploration Company, a division of the Rio Tinto Group, which the Company acquired in 2020. For this transaction, American Pacific has been selected as a finalist in the S&P Global Platts Global Metals Awards, an annual program that recognizes exemplary accomplishments in 16 performance categories, including 'Deal of the Year,' the category in which American Pacific Mining is competing. The awards program is hosted by S&P Global Platts, the leading independent provider of information and benchmark prices for the commodities and energy markets. Also in the American Pacific's asset portfolio are the Gooseberry Gold-Silver project and the Tuscarora Gold project: two high-grade, precious metals projects located in key mining districts of Nevada, USA. The Company’s mission is to grow by the drill bit and by acquisition.

On Behalf of the Board of American Pacific Mining Corp.

The CSE has neither approved nor disapproved the contents of this news release. Neither the CSE nor its Regulation Services Provider (as that term is defined in the policies of the CSE) accepts responsibility for the adequacy or accuracy of this release. 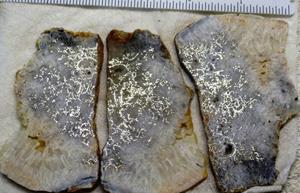 Electrum in Bladed Quartz from the Grand Prize Vein 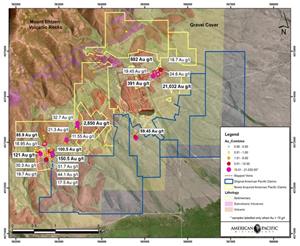 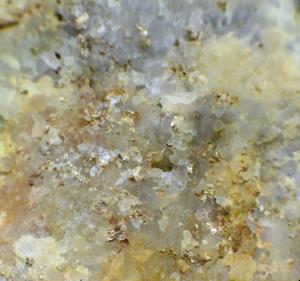 Gold in Sugary Quartz from the Grand Prize Vein 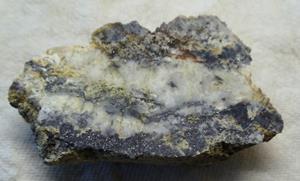 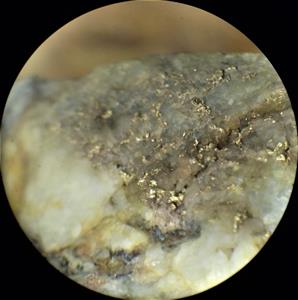