Use of this site indicates acceptance of the Privacy Policy and Terms of Use.
The information on this Website is not reliable and not intended to provide tax, legal, or investment advice. Nothing contained on the Website shall be considered a recommendation, solicitation, or offer to buy or sell a security to any person in any jurisdiction.
CEO.CA members discuss high-risk penny stocks which can lose their entire value. Only risk what you can afford to lose.
© 2022 - CEO.CA Technologies Ltd.
@nasdaq/gold-zones-drilled-on-k2-ne-sesame-target-drilling ↻
0 online
Today This week
Search Subscribe
Members of @nasdaq/gold-zones-drilled-on-k2-ne-sesame-target-drilling

by @nasdaq on 13 Apr 2022, 08:42
Gold zones drilled on K2 NE Sesame target – Drilling planned on nearby Cardamon volcanics and on NE Badji-Gabbro, in strike SW of Patwon

The Cardamom Target lies within altered volcanics (silicified & pyritized) directly north of Sesame FP/QFP intrusion. Three eastwest EM-input anomalies are coincidental with short Airborne IP chargeable zone over one km-strike. Strongest chargeability centered on 2 bull’s-eyes (about 350m diameter, 100-275m depth) seems to increase with depth. Another EM-input (Cardamom-W) is located 800m west of this cluster. The Cardamom EM (Inputs & VTEM) and airborne IP conductors were visited by Dios’ team but are not outcropping as they lie under a swampy area. Interestingly, directly east of the target, a grab-sample from an eastwest felsic dyke had yielded 2.69 g/t Au. The Cardamon target is also located about 5km up-ice (NE) of gold-bearing altered felsic volcanic floats (6.72 g/t Au) and associated to well-defined kilometric gold-in-till (WI-target) anomaly. It is located within the low-magnetic region in Greenschists-grade domain.

The southern contact of magnetic NE Gabbros and felsic volcanics is a good structural target due to rheologic rock contrasts; it was also selected by Artificial Intelligence. This target-area is located in the possible SW extent of the gold-bearing Patwon and Barrick structures on neighbouring Azimut Exploration’s Elmer project. It also hosts two EW VLF-EM conductors associated with sulfidic mineralization including SDBJ showing (1.08% Cu & 13.8 g/t Ag). Locally, it is well sericitized and silicified. About 100m further south, Dios had discovered the Badji showing consisting of centimetric pyrite-chalcopyrite stringers in foliated strongly sericitized dacite yielding 5.39 g/t Au, 111 g/t Ag, 5.05% Cu. Several grabs had yielded anomalous gold (0.170-0.265 g/t Au)-silver (up to 19.7g/t Ag)-copper (0.2-0.6% Cu) within these southern felsic volcanics but few work was completed. A lone grab-sample within the gabbro about 400m north of the contact assayed 0.410g/t Au near NE magnetic lineaments. Systematic prospecting is planned along this favourable contact (at least 2 km strike) as well as fill-up soil-sampling and detailed magnetics. After 2022 field checks, drilling is planned on best targets/showings. See figures. This NE Gabbros-Badji target area is located a few km NE of a major gold-copper-silver bearing volcanic dome lying on top of a large porphyry, itself lying on top of the Kali intrusion.

Some 210.5 meters of the 663.6 meters of Sesame core was sampled under the supervision of Harold Desbiens, Geo M.Sc., 43-101 Qualified Person, for 224 samples and 29 quality controls. Gold assays (mainly AA-24 and some metallic sieve) were undertaken at ALS in Sudbury, Timmins and Vancouver. 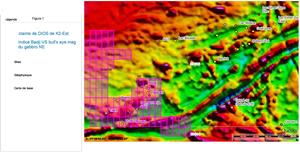 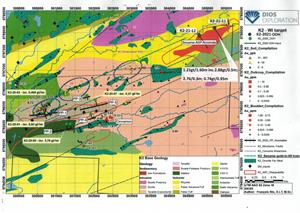 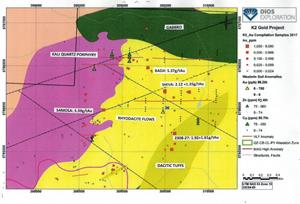 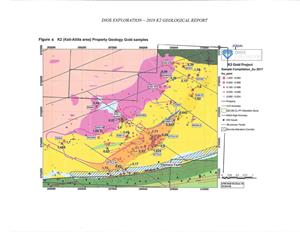