Use of this site indicates acceptance of the Privacy Policy and Terms of Use.
The information on this Website is not reliable and not intended to provide tax, legal, or investment advice. Nothing contained on the Website shall be considered a recommendation, solicitation, or offer to buy or sell a security to any person in any jurisdiction.
CEO.CA members discuss high-risk penny stocks which can lose their entire value. Only risk what you can afford to lose.
© 2022 - CEO.CA Technologies Ltd.
@nasdaq/fenixoro-provides-progress-update-on-phase-1-drilling ↻
0 online
Today This week
Search Subscribe
Members of @nasdaq/fenixoro-provides-progress-update-on-phase-1-drilling

Holes P005-P008 have now been completed. Drilling has continued to progress smoothly, and core recovery continues to be excellent. Assay return slowed over the Christmas break and the Company expects to begin receiving results from the lab shortly, continuing for the next several weeks.

FenixOro CEO John Carlesso stated: “The month of January was extremely productive and we anticipate a busy upcoming several weeks receiving and analyzing assay results from Holes 5,6,7 and 8. As we build on the preliminary results received to date, we expect that these new results will provide greater confirmation of the surface extent, depth continuity, and grade of the veins in this initial drill area, which represents less than one-third of the known mineralization of the property package. Our team remains very encouraged with how the program is progressing.

Phase 1 drilling began in early October of 2020 and has been focused on the most accessible part of the property which has over 40 mapped veins developed in northwest and east-west trending corridors 600-1200 meters long and 300-400 meters wide (Figure 1). Press releases dated November 24 and December 17, 2020 presented results from the first four holes which included numerous high grade vein intersections, principally on the northwest trending family of veins, as well as thicker intervals of lower grade gold mineralization on the east-west trend (incl. 7.75m @ 1.53 g/t in hole P004). Intercepts up to 71 g/t gold extended the known vertical range of high grade gold at Abriaqui to over 1000 meters in outcrop and drill holes. The mineralization remains open at depth. Vein mineralization is well developed in all rock types, including the diorite stock and hornfels in sediments up to 400 meters outward from the intrusive contact.

Hole P005 tested the depth extension of the main northwest trend 400 meters northwest of P001. P006, P007, and P008 tested the northern end of the vein system. P008 was drilled at a steeper angle to get underneath unanticipated historical mine workings on four near surface veins which were encountered in the upper parts of P005 and P006. Numerous visually mineralized quartz-carbonate-sulfide veins and breccia zones were intersected in these holes similar to those seen in P001 that assayed high-grade gold.

Drill core sampling is done in accordance with industry standards. The HQ and NQ diameter core is sawed, and half core samples are submitted to the laboratory. The other half core along with laboratory coarse reject material and sample pulps are stored in secure facilities on site and/or in the sample prep lab. Following strict chain of custody protocols, the samples are driven to the ISO 17025:2017 certified ALS Laboratory sample preparation facility in Medellin and ALS ships the prepared pulps to their assay laboratory in Lima, Peru. Blanks, duplicates, and certified reference standards totaling 15% of the total samples are inserted into the sample stream. To date, no material quality control issues have been detected. Gold is analyzed using 50 gram fire assays and the additional elements are analyzed by ICP with appropriate follow-up for over- limits.

Reported grade intervals are calculated using uncut gold values at a minimum grade cutoff of two grams per tonne gold. The two gram level was chosen as being reasonable for reporting purposes but it has no necessary relation to potential future resource/reserve calculations. The current database is too small to calculate statistically valid levels for cutting of high grade. Maximum sample length is one meter and the length of sub-cutoff grade core contained within a given interval is restricted to one sample length. Reported sample and interval widths are based on lengths of individual samples in core and do not necessarily represent true widths of mineralization. True widths will generally be less than the quoted interval lengths.

The currently reported results may not represent full results for a given drill hole as some additional sampling may be required. All material drill results will be publicly reported in due course. 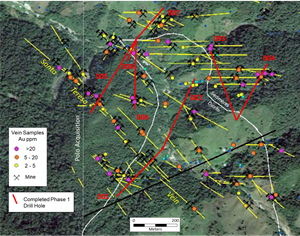