Use of this site indicates acceptance of the Privacy Policy and Terms of Use.
The information on this Website is not reliable and not intended to provide tax, legal, or investment advice. Nothing contained on the Website shall be considered a recommendation, solicitation, or offer to buy or sell a security to any person in any jurisdiction.
CEO.CA members discuss high-risk penny stocks which can lose their entire value. Only risk what you can afford to lose.
© 2022 - CEO.CA Technologies Ltd.
@nasdaq/fenixoro-intercepts-71-gt-gold-and-discovers-multiple ↻
0 online
Today This week
Search Subscribe
Members of @nasdaq/fenixoro-intercepts-71-gt-gold-and-discovers-multiple

Principal take-aways from the initial drill results to date include:

The planned 10-hole, 4500-meter Phase 1 program began in early October and to date, almost 3000 meters have been completed. Drilling conditions and contractor performance have been excellent with core recoveries at almost 100% in all holes. At the current rate Phase 1, which is on time and within budget, will be finished in January of 2021.

Geological Description of the Abriaqui Project

The main target at Abriaqui is a series of over 80 mesothermal style quartz +/- carbonate veins with a sulfide assemblage dominated by pyite-pyrrhotite. The veins are developed in a 1.5 x 4 kilometer diorite body of upper Miocene age and a hornfels zone developed in flanking sediments. The veins are developed in east-west and northwest trending structural corridors 250-350 meters wide and up to 1200 meters long. Assays of over 20 g/t gold have been received for veins over a 1000-meter vertical interval from shallow mine workings and drill intercepts. There is little difference in grade or metal ratios within the vertical range observed which is typical of higher temperature, deep seated mesothermal veins. Gold grades of +20 g/t are common in the veins with occasional samples in excess of 100 g/t.

The geological setting at Abriaqui is similar to that at the Buritica gold deposit 15 kilometers to the east. The global resource at Buritica is 11.3 million ounces at an average of 9.4 g/t gold (Continental Gold press release, January 30, 2019). At Buritica the host diorite intrusion is of similar age, size, and composition to that at Abriaqui and high grade gold veins have been drilled over a minimum 1200m vertical interval. The Abriaqui veins would correspond to the deeper part of the Buritica system where the sulfide and alteration assemblages are dominated by pyrrhotite, magnetite and biotite (Continental Gold press release, September 25, 2019).

Details of Drill results to Date

Figure 1 shows the status of drilling as of mid-December, 2020. The aim of the Phase 1 drill program is to test as many of the known veins as possible as well as several of the significant gold-in-soil anomalies found between known vein families. The holes are testing veins hosted by the diorite and the hornfels zone adjacent to the contact. This drill phase is restricted to the main vein swarm in the northwestern part of the property as the more logistically challenging southeastern vein group will require more time for preparing access.

Additional assay results have been received for hole P001001. These are highlighted in Table 1 along with results previously reported in the Press Release of November 24, 2020. Newly reported intervals include a 1.3 meter intercept from 381.7 meter depth at 21.18 g/t gold which includes the highest individual assay received to date from the drilling, 0.50 meters at 71.9 g/t gold with 60.2 g/t silver.   The new results bring the total number of significantly mineralized veins in the hole to nine. There is excellent continuity of veins and gold grade between the shallow mine workings and the intercepts at depth and the 71 g/t assay is higher than any gold grade seen in mine sampling in the entire area of Figure 1.

A photo accompanying this announcement is available at https://www.globenewswire.com/NewsRoom/AttachmentNg/4bd85bad-d9d3-4891-b4d5-da77e8f47cdc

Hole P002001 was drilled to the northeast from the same pad to test an area with little known mineralization and only one small historical mine. It was designed as the first test of the 25+ gold-in-soil anomalies seen throughout the property (see Press Releases dated August 19 and October 22, 2020). Numerous new veins were intersected including the probable western extensions of two of the east-west trending family which outcrop further to the east. Though there were no very high grade intersections, the hole is extremely important in that it validates the soil sampling technique used and elevates the potential of multiple additional areas with no outcropping gold mineralization.

Hole P003002 was drilled to the north across the family of east-west trending veins in an area of sparsely developed historical mining (Figure 1). The hole was designed to test the east-west vein corridor in the area of the diorite-sediment contact. Two 7-8 meter thick zones were intersected which were characterized by intense replacement by quartz-carbonate veinlets (up to 70% of rock volume) with disseminated sulfide. A third 9 meter thick zone comprised of an intensely brecciated mafic dike with hydrothermal silica cement was also uniformly mineralized at low grade. In aggregate these zones each averaged less than 2 g/t gold but the varied styles of mineralization indicate potential for thicker mineralized zones in several other areas of the property.

Hole P004002 was drilled to test for an eastern extension of the east-west vein family in the sediments more than 200 meters out from the diorite contact. Several thin veins were intersected with grades up to 18.55 g/t gold in addition to a 9 meter thick zone of intense quartz-carbonate veining which averaged 1.5 g/t gold. As in hole 003, thicker zones hosted by different rock types are showing intense veining and gold mineralization associated with the east-west vein trend in the northeastern part of the property at what we are assuming is near the outer limit of the Abriaqui hydrothermal system.

Phase 1 drilling should be concluded by January of 2021. Planning for Phase 2 will depend on results as well as ongoing surface exploration and soil sampling. It is likely to include a significant component of follow-up and offset drilling of the high grade vein intersections and first pass tests of several of the larger soil anomalies. High grade vein, soil gold, and geophysical targets in the as-yet undrilled southeastern license will also be prioritized subject to permitting. Geological work will include follow-up mapping and expanded soil sampling in the area of the southeast magnetic/soil anomaly (see Press Release of October 22, 2020). Additionally, the Company plans to conduct a first pass reconnaissance in the large area of the new Polo acquisition (expected Q1 2021). Many of these additional targets are highlighted in Figure 2.

A photo accompanying this announcement is available at https://www.globenewswire.com/NewsRoom/AttachmentNg/cba09ad1-f030-47fb-8d15-6a38d152f02c

Reported grade intervals are calculated using uncut gold values at a minimum grade cutoff of one gram per tonne gold. The one gram level was chosen as being reasonable for reporting purposes but it has no necessary relation to potential future resource/reserve calculations. The current database is too small to calculate statistically valid levels for cutting of high grade. Maximum sample length is one meter and the length of sub-cutoff grade core contained within a given interval is restricted to one meter. Reported sample and interval widths are based on lengths of individual samples in core and do not necessarily represent true widths of mineralization. True widths will often be less than the quoted interval lengths.

FenixOro’s VP of Exploration, Stuart Moller, led the discovery team at Buritica for Continental Gold in 2007-2011. At the time of its latest report, the Buritica Mine contains measured plus indicated resources of 5.32 million ounces of gold (16.02 Mt grading 10.32 g/t) plus a 6.02 million ounce inferred resource (21.87 Mt grading 8.56 g/t) for a total of 11.34 million ounces of gold resources. Buritica began formal production in November 2020 and has expected annual average production of 250,000 ounces at an all-in sustaining cost of approximately US$600 per ounce. Resources, cost and production data are taken from Continental Gold’s “NI 43-101 Buritica Mineral Resource 2019-01, Antioquia, Colombia, 18 March, 2019”). The comparison between Abriaqui and the nearby Buritica project is meant only to indicate the similarities between the two in terms of geological setting. FenixOro does not imply that exploration results and/or economic characteristics of a potential future mine at Abriaqui will be similar to those seen at Buritica.   Continental Gold was recently the subject of a takeover by Zijin Mining in an all-cash transaction valued at C$1.4 billion. 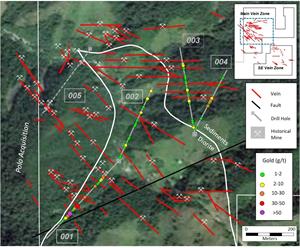 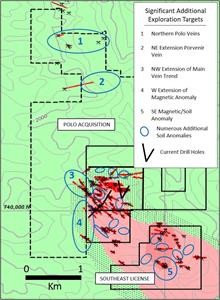 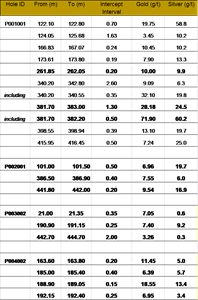 Significant mineralized intercepts from holes 001-004. Numbers in bold font are newly reported in this Press Release