9 May 2022, 08:35
@nasdaq FenixOro Discovers Multiple Gold-Silver Veins in the Southern Zone and a New Style of High Grade Mineralization in the Central Area $FENX $FDVXF $8FD

Use of this site indicates acceptance of the Privacy Policy and Terms of Use.
The information on this Website is not reliable and not intended to provide tax, legal, or investment advice. Nothing contained on the Website shall be considered a recommendation, solicitation, or offer to buy or sell a security to any person in any jurisdiction.
CEO.CA members discuss high-risk penny stocks which can lose their entire value. Only risk what you can afford to lose.
© 2022 - CEO.CA Technologies Ltd.
@nasdaq/fenixoro-identifies-potential-bulk-tonnage-exploration ↻
0 online
Today This week
Search Subscribe
Members of @nasdaq/fenixoro-identifies-potential-bulk-tonnage-exploration

The Phase 1 diamond drilling program has been finished and the drill was demobilized in early February. Final core logging, sampling, and assaying are underway, and all results are expected by the end of February.

The initial results for holes P001 – P004 were reported in press releases dated November 24 and December 17, 2020. They were based on the initial sampling of the most visually promising core intervals in the holes. The current results, shown in the bold font in Table 1, come from numerous zones with less visually obvious mineralization which were not prioritized the first time through the core.

FenixOro CEO John Carlesso commented: “Though the high grade veins are clearly the highest priority for Phase 2 drilling, we are pleasantly surprised by the prospect of an additional bulk tonnage target in an area of lower grade but more tightly spaced veins. As additional assay results are received, we continue to gain a more subtle understanding of the mineralization of the project. We remain very encouraged by the potential at Abriaqui.

As seen in Figure 1, mapped veins in the area of P003 and P004 form a corridor of east-west trending structures 400-500 meters long and 250 meters wide (the EWC). Core samples from drilling have significantly tightened the average spacing of veins underground, originally believed to be roughly 40 meters after surface mapping and sampling. The colored dots along the trends of the holes represent individual 1+ g/t gold samples in core projected vertically to the surface. This tighter spacing of veins raises the possibility of a bulk-tonnage exploration target in the area of the EWC, an idea to be tested in future drilling.

Hole P002 was drilled to the northeast in an area of little known mineralization (Figure 1). The area however hosts multiple gold-in-soil anomalies on surface and the hole was designed as a test of the soil sampling technique. The hole cut a total of 18 veins with assays of at least 1.0 g/t Au with those not listed in Table 1 being <2.0 g/t. P003 was similar with six new veins reported in Table 1 for a total of 24 veins of >1.0 g/t. Two additional veins are reported from P004. Gold grades in the newly reported veins range from 1.96 to 33.30 g/t.

Reported grade intervals are calculated using uncut gold values as the current database is too small to calculate statistically valid levels for cutting high grade assays. Maximum sample length is one meter. Intervals which include multiple samples are calculated using the full geologic interval of mineralization and are not subject to specific rules for cutoff grades. As such, quoted thickness and grade of these intervals do not necessarily represent optimized economic intervals in a potential future mine. Reported sample and interval widths are based on lengths of individual samples in core and do not necessarily represent true widths of mineralization. True widths will sometimes be less than the quoted interval lengths. 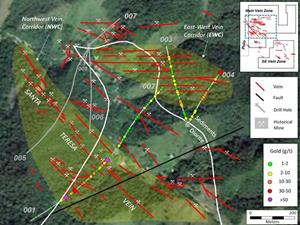