Use of this site indicates acceptance of the Privacy Policy and Terms of Use.
The information on this Website is not reliable and not intended to provide tax, legal, or investment advice. Nothing contained on the Website shall be considered a recommendation, solicitation, or offer to buy or sell a security to any person in any jurisdiction.
CEO.CA members discuss high-risk penny stocks which can lose their entire value. Only risk what you can afford to lose.
© 2022 - CEO.CA Technologies Ltd.
@nasdaq/fenixoro-extends-known-strike-length-of-main-vein-family ↻
0 online
Today This week
Search Subscribe
Members of @nasdaq/fenixoro-extends-known-strike-length-of-main-vein-family

TORONTO, March 15, 2021 (GLOBE NEWSWIRE) -- FenixOro Gold Corp (CSE:FENX, OTCQB:FDVXF, Frankfurt:8FD) is pleased to announce final drill results from holes P007 – P009 from its recently completed 4029 meter Phase 1 diamond drilling program. These results have some important positive implications for the Company’s understanding of the vein system at its Abriaqui project in Colombia. Highlights include :

FenixOro Vice President of Exploration Stuart Moller commented “These final results cap off a highly successful maiden drill program at Abriaqui. The intercept in P008 indicates that the multiple void spaces in holes P005 and P006 do indeed represent previously unknown old mines developed on closely spaced high grade veins. The extension of the NWC almost 500 meters to the southeast greatly increases resource potential on that entire family of veins and makes that corridor the principal focus of planned Phase 2 drilling. We are currently compiling and interpreting the data generated during Phase 1 drilling and we will report our very positive conclusions as to our view of the resource potential in the coming days.”

Hole P008 was drilled to the south from the same platform as P005 and P006 at a -65 degree angle (Figure 1). Its purpose was to drill underneath four void spaces intersected in those holes which appeared to be old mines developed on closely spaced east-west trending veins. The first two open spaces were also cut in the upper part of P008 but the projection of the deepest one was intersected below the old workings at a depth of 63 meters. The full intercept was 3.65 meters @ 5.40 g/t gold including 0.25 meters at 71 g/t. As noted in the Press Release dated February 22, 2021, the area is at the western end of the 600 x 250 meter east-west trending vein corridor (EWC) defined in part by the 24 closely spaced veins intersected in hole P003. The tight spacing of veins in P005-006 and P008 is similar to that in P003 but the grade is probably significantly higher as verified by the 71 g/t sample and the fact that historically, the artisanal miners only concentrated on the highest grade veins. Future drilling will test the area at greater depth.

Hole P009 was the southernmost area drilled in the program. It was designed to test the southeast extension of the NWC as well as a magnetic anomaly. Twelve veins were intersected, and they appear to represent the extension of the family of veins seen in P001 500 meters to the northwest. Significant intercepts are summarized in Table 1. The 1400 x 400 meter NWC is emerging as the principal exploration area on the part of the property drilled to date (Figure 1). As evidenced by hole P001, it contains the best combination of multiple veins, high grades, and vein widths (see Press Release dated February 24, 2021). The intercept at 701 meters in P005 is the deepest to date on the property, and the multiple veins in P009 extend the strike length significantly. The NWC is considered to be the best area to develop gold resources in the short to medium term and it will be the focus of the majority of the Phase 2 drilling currently in the planning stage. The magnetic anomaly was explained by a relatively magnetic, but unmineralized phase of the diorite complex.

Hole P007 was drilled to the northeast to test a series of smaller veins at the northern limit of the known mineralized system (Figure 1). Two thin veins were intercepted but grades were low and the area is not a high priority for additional drilling.

FenixOro Gold Corp is a Canadian company focused on acquiring gold projects with world class exploration potential in the most prolific gold producing regions of Colombia. FenixOro’s flagship property, the Abriaqui project, is located 15 km west of Continental Gold’s Buritica project in Antioquia State at the northern end of the Mid-Cauca gold belt, a geological trend which has seen multiple large gold discoveries in the past 10 years including Buritica and Anglo Gold’s Nuevo Chaquiro and La Colosa. As documented in “NI 43-101 Technical Report on the Abriaqui project Antioquia State, Colombia” (December 5, 2019), the geological characteristics of Abriaqui and Buritica are very similar. The report also documents the high gold grade at Abriaqui with samples taken from 20 of the veins assaying greater than 20 g/t gold. 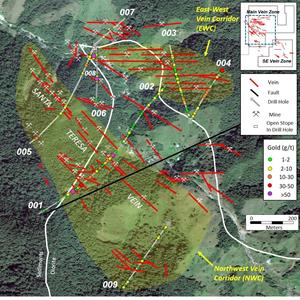 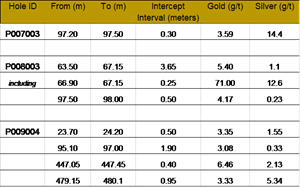