Use of this site indicates acceptance of the Privacy Policy and Terms of Use.
The information on this Website is not reliable and not intended to provide tax, legal, or investment advice. Nothing contained on the Website shall be considered a recommendation, solicitation, or offer to buy or sell a security to any person in any jurisdiction.
CEO.CA members discuss high-risk penny stocks which can lose their entire value. Only risk what you can afford to lose.
© 2022 - CEO.CA Technologies Ltd.
@nasdaq/fenixoro-establishes-preliminary-target-of-16-24 ↻
0 online
Today This week
Search Subscribe
Members of @nasdaq/fenixoro-establishes-preliminary-target-of-16-24

TORONTO, March 19, 2021 (GLOBE NEWSWIRE) -- FenixOro Gold Corp (CSE:FENX, OTCQB:FDVXF, Frankfurt:8FD) is pleased to announce its preliminary analysis of the results from its 4029 meter Phase 1 drilling program at Abriaqui and the plan for Phase 2 drilling. Highlights include:

FenixOro CEO John Carlesso commented: “We recognize that for many investors it can be challenging to decipher drill results and technical information disclosed in press releases. We believe we have an obligation to state as plainly as possible that our Phase 1 drilling has identified a significant gold discovery at Abriaqui with clear potential for 1.6 – 2.4 million ounces of gold on just four of the vein structures drilled to date. Significant additional potential exists on those same veins at depth, on the numerous additional veins intersected in the drilling, and throughout the portions of the property yet to be drilled. The process of turning that potential into NI 43-101 compliant resources is a function of time and drilling but we believe that the most difficult challenge, the initial discovery, has been achieved. Our entire organization is extremely pleased with the accomplishments realized in Phase 1 and we are very excited to embark on Phase 2 in the coming days.”

Phase 1 drilling focused on the easily accessible northwest part of the property. Nine diamond drill holes angled at 45 - 65 degrees downward from the surface ranged from 100-750 meters in depth (Table 1). They tested 250-350 meter wide corridors each containing multiple sub-vertical veins ranging in thickness from 15 centimeters to 7.7 meters. The thicker veins are characterized by one or more thinner zones of massive sulfides with halos of lower grade veinlet style mineralization. The best example of this style is the intercept in hole P006 which includes 0.45 meters of 124 g/t gold within an overall intercept of 7.7 meters of 8.46 g/t gold (see press release dated February 24, 2021). Interestingly, that intercept is between the two main vein corridors and is not included in the four veins used in the 1.6 – 2.4 million ounce analysis detailed below. A second style of mineralization is indicated by hole P003 in the east-west vein Corridor (EWC). That hole contained 24 individual veins grading at least 1 g/t gold within the 250 meter wide corridor indicating a potential bulk-mineralization target for future follow-up drilling (see press release dated February 22, 2021).

Four of the better veins were chosen for a first-pass modeling exercise, three in the NWC and one in the EWC. The drill intervals used in the calculations (reported in more detail in several earlier Press Releases) are summarized in Table 2. Resource potential sections are presented for those veins which are highlighted in Figure 1. The longitudinal sections are vertical sections in the plane of each vein looking towards the northeast (north for section EWC11). On each section the topographic surface is plotted along with all available surface and drilling assay data. The red squares are surface samples taken from shallow mine workings and vein outcrops with assays in grams per tonne gold. Drill data are plotted as a single red circle where each angled drill hole intersects the plane of the vein. Planned Phase 2 drill intersection points are plotted in blue. The yellow area in each section is that portion of the vein that, based on current data, is most likely to contain potentially economic thickness and gold grade.

The targeted tonnage potential for each vein is a simple volume calculation of:

The depth on each section is arbitrarily cut off at the 1500 meter elevation which is 50 meters below the level of the deepest intersection in the drilling to date. The grade used in the calculations is an average of the grade in drill holes. It does not include the (usually higher) grades from mine samples as they are generally from selected higher grade parts of the wider mineralized structures. The summary of potential for the four sections shown in Table 3 presents the totals as a range as per NI 43-101 requirements. Clearly, there is not enough information available after only nine drill holes to precisely estimate future resource potential so the average thicknesses and grades are presented as +/- 20% of the best estimates derived from existing data. FenixOro feels that this range provides a fair estimation of resource potential at this conceptual stage. As noted in the Forward Looking Information section below, there is no gurantee that a resource will ever be delineated.

Table 3 summarizes the results of the calculations. On these four veins alone there is an estimated 1.6 -2.4 million ounce minimum resource potential down to the 1500 meter elevation. There is downside risk to this preliminary form of analysis. Most veins around the world are not homogeneous blocks of ore grade material and there may be low grade spots in some areas. Also the grades and thicknesses assumed are based on relatively few data points. Additionally, time and drilling will be required to convert potential resources into NI 43-101 compliant resources.

The upside potential is significant however. These are only four of the 100+ known veins on the property and most drill holes intersected more veins than those mapped on the surface. Only 20% of the vein intercepts reported in previous press releases are included in these four veins. The potential at depth was arbitrarily cut off at 1500m despite there being no geological indications that that level is near the bottom of the potentially economic zone. There is significant additional vein potential in the as yet undrilled southeastern license where over 25 veins are exposed at a significantly higher elevation and therefore have even greater depth potential (Figure 6). Given these factors, FenixOro considers the clearly defined 1.6 – 2.4 million ounce target to represent a minimum objective of future exploration and definition drilling.

A Phase 2 drilling program is scheduled to commence in early Q2 2021. Given the obvious potential for significant resources in the NWC, the decision was made to concentrate the majority of the minimum 4000 meter program in that area. The blue lines on Figure 1 and the corresponding blue points on the sections show that the emphasis will be infill and step-out drilling to further define and hopefully expand the resource potential blocks in preparation for eventual resource definition drilling. Most holes will test the entire corridor and not just the veins used in this analysis.

The decision to spend the next phase consolidating and further defining the discovery made in Phase 1 in no way minimizes the importance of the large number of additional targets on the property including 40+ known veins and numerous gold-in-soil anomalies. These additional target areas include the relatively under-explored southern block, where the highest grade vein sample of the entire project assayed 146 g/t gold.

There are currently no NI 43-101 compliant resources or reserves in the project area. The analysis of Phase 1 drill results is intended to estimate the potential for future resources which will require significant additional drilling to define. 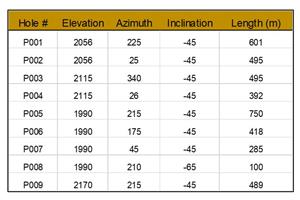 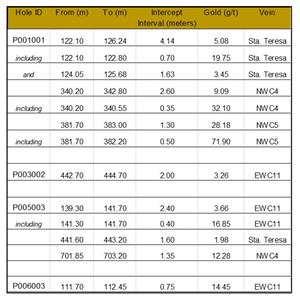 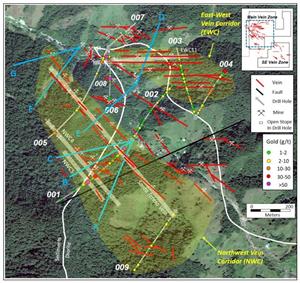 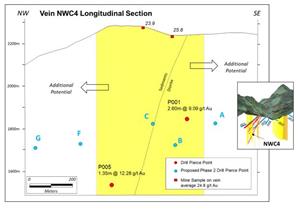 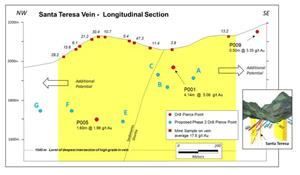 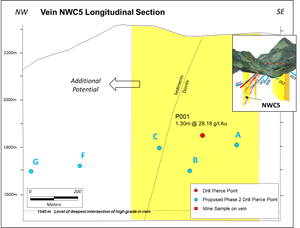 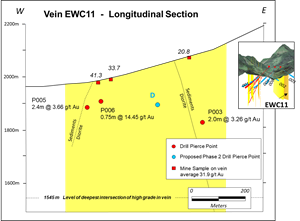 Resource objectives for four of the better veins at Abriaqui. Note: No NI 43-101 compliant resources or reserves exist at Abriaqui and this analysis is meant to highlight the potential for future resources. Results are presented as best estimates +/- 20% for thickness, gold grade, and total ounces. 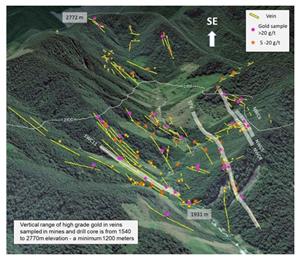 Mapped veins and surface gold values showing the vertical range of mineralization and the location of the four resource potential sections.