Use of this site indicates acceptance of the Privacy Policy and Terms of Use.
The information on this Website is not reliable and not intended to provide tax, legal, or investment advice. Nothing contained on the Website shall be considered a recommendation, solicitation, or offer to buy or sell a security to any person in any jurisdiction.
CEO.CA members discuss high-risk penny stocks which can lose their entire value. Only risk what you can afford to lose.
© 2021 - CEO.CA Technologies Ltd.
@nasdaq/fenixoro-cuts-114-meters-at-608-gt-gold-on-the-santa ↻
0 online
Today This week
Search Subscribe
Members of @nasdaq/fenixoro-cuts-114-meters-at-608-gt-gold-on-the-santa

TORONTO, Aug. 05, 2021 (GLOBE NEWSWIRE) -- FenixOro Gold Corp (CSE:FENX, OTCQB:FDVXF, Frankfurt:8FD) is pleased to announce the discovery of the widest mineralized zone yet seen at Abriaqui on the Santa Teresa vein system. The results are from an area of newly discovered underground mine workings. Santa Teresa is becoming much more complex than originally understood and the new work opens up the potential for the discovery of additional wide zones.

FenixOro VP Exploration Stuart Moller notes that, “Finding 10 to 15 meter mineralized widths at these grades is a game changer in terms of adding resource ounces and reducing mining costs. Santa Teresa is emerging as much more than a single vein and we see significantly enhanced tonnage potential along a kilometer of strike and a minimum 600 meters vertically. We are now targeting multiple additional areas along trend where we see potential for wider zones of mineralization.”

The Santa Teresa trend is the longest and best developed vein system within the Northwest Vein Corridor (NWC) at Abriaqui (Figure 1). Surface outcrop is minimal and until recently, Santa Teresa was characterized by only two drill intercepts and a number of samples taken from existing underground mine workings. Artisanal mining historically concentrated only on the high grade core of the veins, and mine workings available for sampling did not necessarily represent the full thickness of the mineralization. To date this has ranged up to 4.1 meters in the drill holes on Santa Teresa.   In a recent program of mine mapping (see Press Release of June 23, 2021) several new mines were accessed which included areas where crosscuts were developed perpendicular to the vein trend. Recent channel sampling along these crosscuts has allowed for a much better characterization of the full width of mineralization. Phase 2 drilling, currently underway, is further testing Santa Teresa and several other veins in the NWC. Results from the first two holes will be reported soon.

The Santa Teresa trend is characterized by multiple individual high grade veins separated by zones of lower grade material. As an example, the full intercept in drill hole P001 is typical with three veins with grades of 7-19 grams per tonne gold contributing to a full intercept of 4.1 meters at 5.08 g/t gold.

The channel sampling program along the Santa Teresa trend targeted five historical mining areas and this release presents results from only the northernmost area with additional assays pending.   As shown in Figure 2, veins were sampled over their geological thicknesses and adjacent areas were sampled in one-meter increments.   The veins are hosted by hornfelsed sediments more than 200 meters from the intrusive contact and most samples are unaffected by surface oxidation. Five sub-parallel veins were mapped on mine level 2137 within a 15 meter wide corridor. Two mineralized zones separated by 3-5 meters of low grade material resulted in:

The “Santa Teresa Vein” is clearly a much more complex structural zone than previously understood, with gold mineralized widths up to 15 meters true thickness.   In the Press Release of March 19, 2021 the resource potential estimate for the Santa Teresa Vein assumed an average width of 3 meters at 5 g/t gold. This newly sampled area verifies that grade and significantly exceeds the thickness and tonnage potential. These wider zones of mineralization will hopefully have a significant impact on future project economics as was seen at the neighboring Buritica project with Continental Gold’s discovery of their “Bulk Mineralized Zones” (see Continental Gold “NI 43-101 Buritica Mineral Resource 2019-01, Antioquia, Colombia”, 18 March, 2019)

While the underground sampling program is restricted to existing mine workings, in areas where crosscuts are available for sampling, FenixOro has found 5+ meter widths at good gold grade on the Baul 3 and now the Santa Teresa veins. The company is considering a program of short horizontal drill holes in some of the mines as part of the future resource definition program.

Figure 1. Location of the Santa Teresa Vein system within the Northwest Corridor of veins at Abriaqui: https://www.globenewswire.com/NewsRoom/AttachmentNg/091c943a-244b-4443-8174-f700e92e22d4

Stuart Moller, Vice President Exploration and Director of the Company and a Qualified Person for the purposes of NI 43-101 (P.Geo, British Columbia), has prepared or supervised the preparation of the technical information contained in this press release. Mr. Moller has more than 40 years of experience in exploration for precious and other metals including ten in Colombia and is a Fellow of the Society of Economic Geologists.

Mine samples were taken as continuous channel samples by company employees supervised by company geologists. Following strict chain of custody protocols, the samples are driven to the ISO 17025:2017 certified ALS Laboratory sample preparation facility in Medellin and ALS ships the prepared pulps to their assay laboratory in Lima, Peru. Blanks, duplicates, and certified reference standards totaling 15% of the total samples are inserted into the sample stream. To date, no material quality control issues have been detected. Gold is analyzed by fire assay with 50 gram charges for grades in excess of 10 grams per tonne and the additional elements are analyzed by ICP with appropriate follow-up for over-limits.

Reported grade intervals are calculated using uncut gold values. Maximum sample length is one meter. Intervals which include multiple samples are calculated using the full geologic interval of mineralization and are not subject to specific rules for cutoff grades and internal low grade. As such, quoted thickness and grade of these intervals do not necessarily represent optimized economic intervals in a potential future mine.

There are currently no NI 43-101 compliant resources or reserves in the project area.

FenixOro Gold Corp is a Canadian company focused on acquiring gold projects with world class exploration potential in the most prolific gold producing regions of Colombia. FenixOro’s flagship property, the Abriaqui project, is located 15 km west of Continental Gold’s Buritica project in Antioquia State at the northern end of the Mid-Cauca gold belt, a geological trend which has seen multiple large gold discoveries in the past 10 years including Buritica and Anglo Gold’s Nuevo Chaquiro and La Colosa. As documented in “NI 43-101 Technical Report on the Abriaqui project Antioquia State, Colombia” (December 5, 2019), the geological characteristics of Abriaqui and Buritica are very similar. The report also documents the high gold grade at Abriaqui with samples taken from 20 of the veins assaying greater than 20 g/t gold. Since the preparation of this report a Phase 1 drilling program has been completed at Abriaqui following surface and underground geological mapping and sampling, as well as a magnetometry survey. 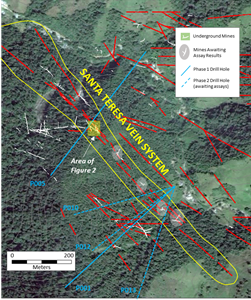 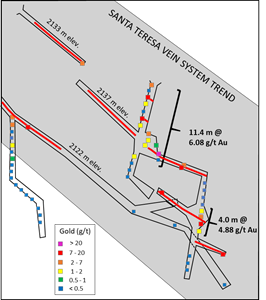