Use of this site indicates acceptance of the Privacy Policy and Terms of Use.
The information on this Website is not reliable and not intended to provide tax, legal, or investment advice. Nothing contained on the Website shall be considered a recommendation, solicitation, or offer to buy or sell a security to any person in any jurisdiction.
CEO.CA members discuss high-risk penny stocks which can lose their entire value. Only risk what you can afford to lose.
© 2022 - CEO.CA Technologies Ltd.
@accesswire/meridian-outlines-further-resource-development-and ↻
0 online
Today This week
Search Subscribe
Members of @accesswire/meridian-outlines-further-resource-development-and

The Company has also retrieved an additional 1,625 historical multielement soil sample records from archival maps of BP Minerals following improved survey control. It has connected the Sucuri prospect, the Santa Helena Mine and the Álamo prospect into a highly prospective 6.5 km copper-gold-silver VMS trend ("the C2 Trend") ("Figure 2"). After the Cabaçal deposit, this will be the focus of future resource development and exploration programs. The C2 Trend is part of the 50km long Cabaçal VMS copper-gold system that has been overprinted by a late-stage gold event.

Dr Adrian McArthur, CEO and President comments: "Our Mine Corridor development teams continue to deliver a strong pipeline of targets at Cabaçal. The confirmation of a structural link between the Cabaçal Mine and the C4A gold-silver discovery has defined a focussed corridor to test this open mineralization and to potentially link it with JUSPD258 located 1km to the northwest that returned 26.2 g/t Au over 0.6m. These new IP results, recent field mapping was combined with historical data and defined further structural intersection and flexures, that we consider strongly prospective to host gold mineralization related to the late stage high-grade gold overprint extensively defined at the Cabaçal and Santa Helena mines.

Today we are also announcing that a new focussed copper-gold-silver trend has been defined; the C2 Trend. The C2 Trend was historically thought to be separate individual VMS centres of mineralization. Over the last nine months, we completed a program of detailed desktop studies and extensive confirmation field checks confirming the presence of gossanous veining in undrilled positions and in areas of now included historical data. Creating a geological model, mapping the Cabaçal style of VMS mineralization and structures associated with the Cabaçal's late-stage gold overprint, from the Sucuri prospect in the northwest, extending southeast to the Santa Helena Mine and beyond to the Álamo target. Creating a major new focus for the Company's strategy to build a belt scale and long term copper-gold mining project centred on the pending Cabaçal resource."

C4A Geophysical Program - Connections Northwest to the Cabaçal Mine

Meridian's skilled in-house geophysical crew has completed its initial program to test the open extensions of the C4-A gold-silver discovery. This program's results has defined an IP anomaly, extending northwest from the C4-A's CD-139 - CD142 discovery holes through to the Cabaçal Mine, 1.7km to the northwest.

The trend is also seen to be spatially associated with a late stage diabase dyke. A correlative dyke lies adjacent to the "gold-only" mineralization zone discovered in in the Cabaçal Northwest Extension[2]. This may reflect the presence of a reactivated macro structure associated with the late-stage overprinting gold event, and forms a target corridor for future drilling.

The drill density progressively becomes sparse southeast of the Cabaçal Mine and much of the strike length of the target corridor is untested. One BP Minerals hole 1km to the northwest of C4-A, JUSPD258, returned 26.2 g/t Au over 0.6m from 191.0m, is along strike one of the chargeability highs, and the diabase dyke's trend. JUSPD258's location along strike from the C4-A gold-silver discovery, and 750m south of the Cabaçal Mine, suggests a strong potential that this new gold-silver trend extends out from the C4-A discovery zone and possibly connects with the mine.

Additional 50m northwesterly step put drill holes are being planned shortly along strike from the CD-139 - CD142 positions as field checking of the broader corridor will be undertaken.

Delineation of the C2 Trend

In conjunction with ongoing data revisions and associated preparation for environmental permitting for exploration on the Santa Helena licence, the Company has untaken field checks on a number of soil geochemical target anomalies northwest and southeast of the mine. A detailed review of historical BP soil geochemical maps and grid relationships have allowed for adjustments to the geo-registration of map sheets with historical sampling extending southeast and northwest from the Santa Helena Mine, creating the 6.5km long C2 Trend. This has resulted in the addition of a further 1,625 copper, gold, zinc, and lead sample points beyond those originally retrieved from the RTZ archives connecting three separated projects into one volcanic centre that defines the C2 Trend.

The data was important in defining extensions to the gold and base metal anomalies. In the original C2C / Sucuri target area to the northwest, the new block of data covers a 3.2 km strike length of prospective mine corridor stratigraphy, and aligns with the position of the principal copper anomaly in the interpreted up-dip and up-plunge projection of the Sucuri group of VTEM conductors. Copper peaks at >400ppm, in similar thresholds to the Cabaçal Mine's copper in soil anomalies. Gold count anomalies are present now in an area previously representing a gap in data coverage, defining a series of anomalies, increasing in amplitude 700m northwest of the limit of Santa Helena resource. A cluster of gold anomalies extends over 900m on the eastern flank of the Sucuri 2007 VTEM conductors, and a second cluster extending over 650m over the central sector of the conductive corridor. Gossanous quartz veins seen at surface suggest again that the base metal event has experienced the late-stage hydrothermal overprint (Figure 2), aligning with the strike extension of Sucuri drill hole JUCHD011 which returned 140g/t Au over 1.0m from 53.0m.

Only minor gaps exist now in the data coverage in the C2-Trend which will be progressively covered by future programs.

The C2-Trend continues southeast of Santa Helena, where soil data has been compiled extending 1.1 km further along strike from the limit of the previous point data, showing gold and base metal anomalies that remain open to the limit of sampling. The principal anomaly extends for 800m beyond the previous limit of data, peaking at 88 gold counts, with additional anomalies commencing on the southwest quadrant of the survey block and remaining open. Copper and Zinc anomalies similarly remain open on the eastern and southern limits of the survey block. This corridor did form part of the separate Álamo trend, on exploration licence 867.407/2008 which is awaiting renewal for its second term. Álamo is highlighted by 3.6km corridor of enhanced EM conductivity defined by the 2007 VTEM survey that is strongly analogousto the EM conductivity signature of the Cabaçal Mine.

On August 22nd 2022, Meridian announced it has delivered geological data from 869 DDH's (91,956m), 23 trenches (1,539m) and including 58,428 assays for use in geological modelling and resource estimation to the resource specialist group: H&S Consultants ("H&SC") in preparation for the maiden resource statement on the Cabaçal copper-gold VMS Deposit, due at the end of the 3rd Quarter, 2022; this is on schedule. Currently two drill rigs are alternatively drilling the Cabaçal deposit's limits or infilling zones of sparse results; further results are pending.

Future drilling will target the C2-Trend and also to test the 1km trend extending northwest from the C4-A's gold-silver discovery to JUSPD258's high-grade gold interval. 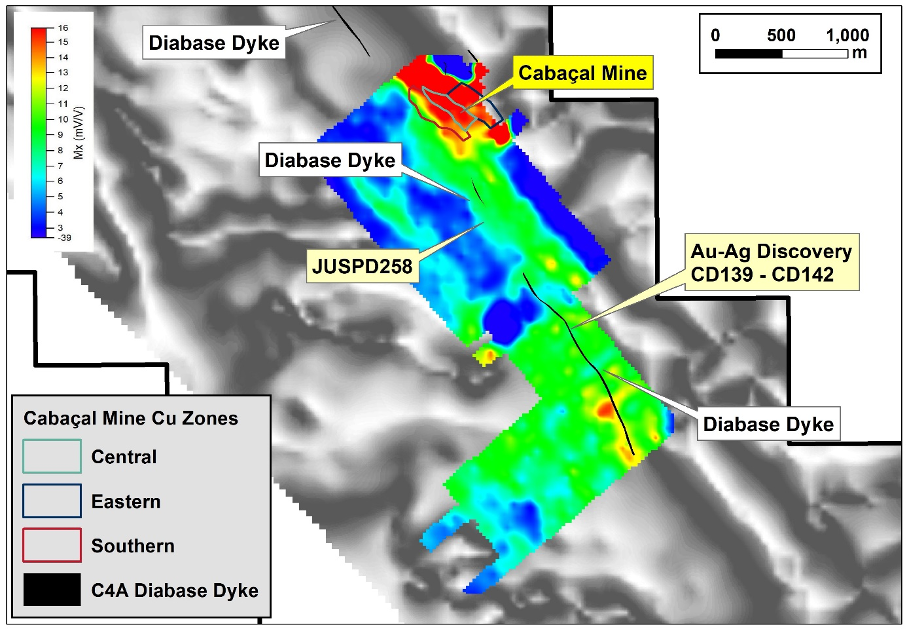 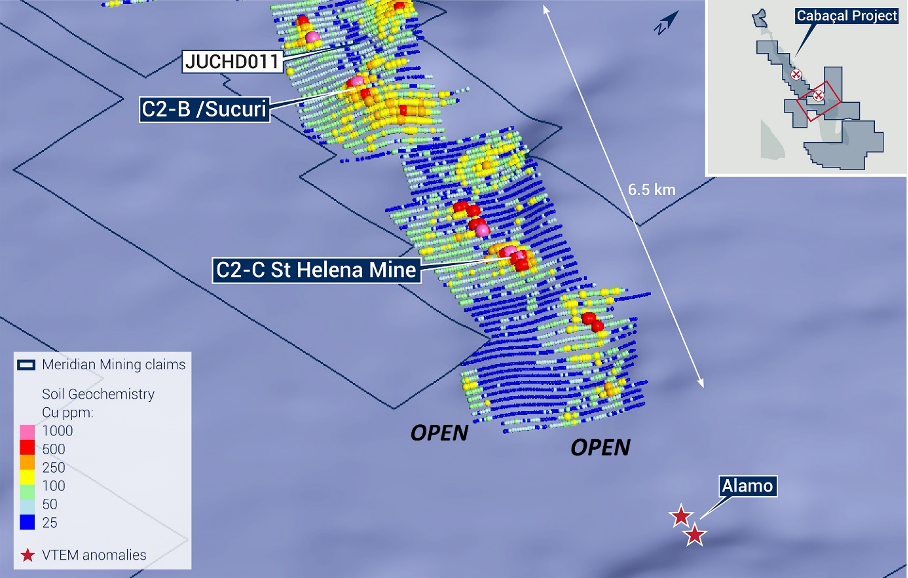 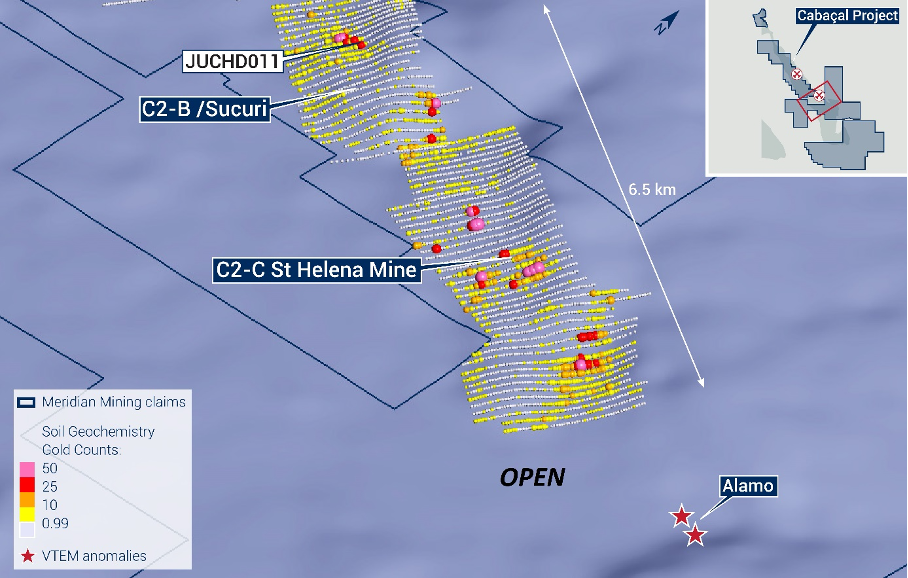 Meridian has defined an open 2,000m trend of shallow copper-gold mineralization centred on the Cabaçal Mine. This mineralization trends northwest-southeast, sub-crops along its northeast limits and dips to the southwest at 26° and is up 90m thick; presenting excellent open-pit geometry and mineral endowment. Meridian is currently focused on infilling this 2,000m zone.

Cabaçal's base and precious metal-rich mineralization is hosted by volcanogenic type, massive, semi-massive, stringer, and disseminated sulphides within units of deformed metavolcanic-sedimentary rocks ("VMS"). A later stage sub-vertical gold overprint event has emplaced high-grade gold mineralization truncating the dipping VMS layers. It was explored and developed by BP Minerals/Rio-Tinto from 1983 to 1991 and then by the Vendors in the mid 2000's. This historical exploration database includes over 83,000 metres of drilling, extensive regional mapping, soil surveys, metallurgy from production reports and both surface and airborne geophysics. The majority of Cabaçal's prosects remain to be tested.

Meridian Mining UK S is focused on the acquisition, exploration, and development activities in Brazil. The Company is currently focused on resource development of the Cabaçal VMS copper-gold project, exploration in the Jaurú & Araputanga Greenstone belts located in the state of Mato Grosso, exploring the Espigão polymetallic project and the Mirante da Serra manganese project in the State of Rondônia Brazil.

The geophysical survey has been conducted by the Company's in-house team utilizing its GDD GRx8-16c receiver and 5000W-2400-15A transmitter. Electromagnetic surveys have been conducted using the SMARTem Geophysical Receiver System manufactured by ElectroMagnetic Imaging Technology (EMIT). Data sent to the Company's independent consultant, Core Geophysics. Modelling of conductivity response is undertaken using industry-standard Maxwell software. Geophysical exploration targets are preliminary in nature and not conclusive evidence of the likelihood of a mineral deposit.

BP Minerals soil samples were analysed for Cu, Pb, Zn, and Ni by aqua regia / atomic absorption at their in-house Laboratory. The "gold counts" referenced in the soil geochemistry figure is a measure of the number of gold grains visually counted in a pan concentrate from a set volume of material: a 5-litre bucket of soil from the B-horizon, providing a qualitative indicator of the presence of gold in a sample.

Dr Adrian McArthur, B.Sc. Hons, PhD. FAusIMM., CEO and President of Meridian as well as a Qualified Person as defined by National Instrument 43-101, has supervised the preparation of the technical information in this news release.

Stay up to date by subscribing for news alerts here: https://meridianmining.co/contact/

Some statements in this news release contain forward-looking information or forward-looking statements for the purposes of applicable securities laws. These statements address future events and conditions and so involve inherent risks and uncertainties, as disclosed under the heading "Risk Factors" in under the heading "Risk Factors" in Meridian's most recent Annual Information Form filed on www.sedar.com. While these factors and assumptions are considered reasonable by Meridian, in light of management's experience and perception of current conditions and expected developments, Meridian can give no assurance that such expectations will prove to be correct. Any forward-looking statement speaks only as of the date on which it is made and, except as may be required by applicable securities laws, Meridian disclaims any intent or obligation to update any forward-looking statement, whether as a result of new information, future events, or results or otherwise.