Use of this site indicates acceptance of the Privacy Policy and Terms of Use.
The information on this Website is not reliable and not intended to provide tax, legal, or investment advice. Nothing contained on the Website shall be considered a recommendation, solicitation, or offer to buy or sell a security to any person in any jurisdiction.
CEO.CA members discuss high-risk penny stocks which can lose their entire value. Only risk what you can afford to lose.
© 2022 - CEO.CA Technologies Ltd.
@accesswire/ggl-completes-underground-exploration-and-surface-drilling ↻
0 online
Today This week
Search Subscribe
Members of @accesswire/ggl-completes-underground-exploration-and-surface-drilling

VANCOUVER, BC / ACCESSWIRE / January 5, 2023 / GGL Resources Corp. (TSXV:GGL) ("GGL" or the "Company") is pleased to announce that it has completed an underground exploration and surface drilling program at its road-accessible Gold Point Project in the Walker Lane Trend of Western Nevada.

The 2022 exploration program was completed in early December and comprised:

Work on the former mines focused on the Orleans Mine, the largest of four former producers on the Gold Point Property. Rehabilitation of the Orleans and Dunfee collars allowed for safe access to those mine shafts. Once underground, crews discovered the development at the Orleans Mine was more extensive than was indicated on maps in the Company's archives. The undocumented workings included a series of raises and winzes that provided safe access to all but the lowest two levels of the mine.

Towards the end of mining operations in the 1960s, significant infrastructure was developed around the eastern mineralized shoots; however, it appears that operations ceased before any significant mining was conducted on these shoots.

During the 2022 program, initial sampling and mapping was done in the western portions of the 150', 300', 400', 600', and 800' levels of the Orleans Mine. Access to the 960' and 1020' levels is open, but additional ground support and rehabilitation is required before crew can safely enter those workings. There is good air circulation throughout the mine, suggesting that blockages that occur locally in shafts and drifts are relatively limited in size and extent.

Access was also established to the Grand Central Mine allowing crews to complete mapping and sampling in that mine.

Results from the underground sampling at both mines will be released once assays are received and reviewed.

Two diamond drill holes, totaling approximately 440.5 m, were completed on a section line that extends through two of the past-producing veins (Great Western and Hornsilver) and other nearby targets that GGL has identified in recent years by prospecting and soil geochemistry.

Drilling evaluated both high-grade and bulk tonnage potential related to multiple, closely spaced veins that are bisected by the section line. The section line also crosses linear gold-in-soil anomalies that are attributed to veins and a broad zone of elevated soil values that has not been explained by surface exploration.

One of the 2022 drill holes tested the Great Western Vein along strike of hole GP-21-012, which intersected 2.22 g/t gold over 12.19 m, including 5.17 g/t gold over 4.57 m (see Company news release date December 8, 2021). This intersection lies 80 m northwest of the limit of the underground workings and the section line crosses the projection of the structure 75 m further to the northwest.

About the Orleans Mine

The Orleans Vein was discovered in 1908 and mined intermittently until 1962. Historical records indicate that approximately 74,000 ounces were produced from the Orleans and Great Western Mines, with recoveries of 92% to 98% for gold through cyanidation. Most this production was from the Orleans Mine.

It is estimate that there is almost 4,200 m of horizontal development in the Orleans Mine, accessed via the central Dunfee shaft. The workings are mostly open and are dry to approximately 275 m vertically below surface on the Orleans Vein (1020 ft level).

Historical records indicate that the mines at Gold Point had high cut-off grades (about 10 g/t gold), suggesting that well mineralized areas likely remain in un-mined portions of the developed workings. This assumption is further supported by a report that describes 35 historical samples collected post-mining across the Orleans Vein from the 960 ft to 1020 ft levels, which averaged 0.389 opt (13.3 g/t) gold including a vein on the 1020 ft level that returned 7.97 opt (273.2 g/t) gold over 0.5 m. Additionally, 21 samples from the 600 ft to 1020 ft levels reportedly averaged 0.314 opt (10.77 g/t) gold.

The Gold Point Project is situated alongside the community of Gold Point, which is accessed by Highway 774. The Gold Point property totals 4,917 acres (19.9 km2) and consists of 257 lode claims and 7 patented claims.

The property covers past-producing underground mines that explored along parts of four prominent vein structures. These main structures are paralleled by several other lightly explored structures. The mines operated intermittently from the 1880s to the early 1960s, producing gold and silver from mesothermal veins. The mineralization is strongly oxidized to the bottom of the workings, which reached a maximum depth of 1,020 ft (311 m) downdip. 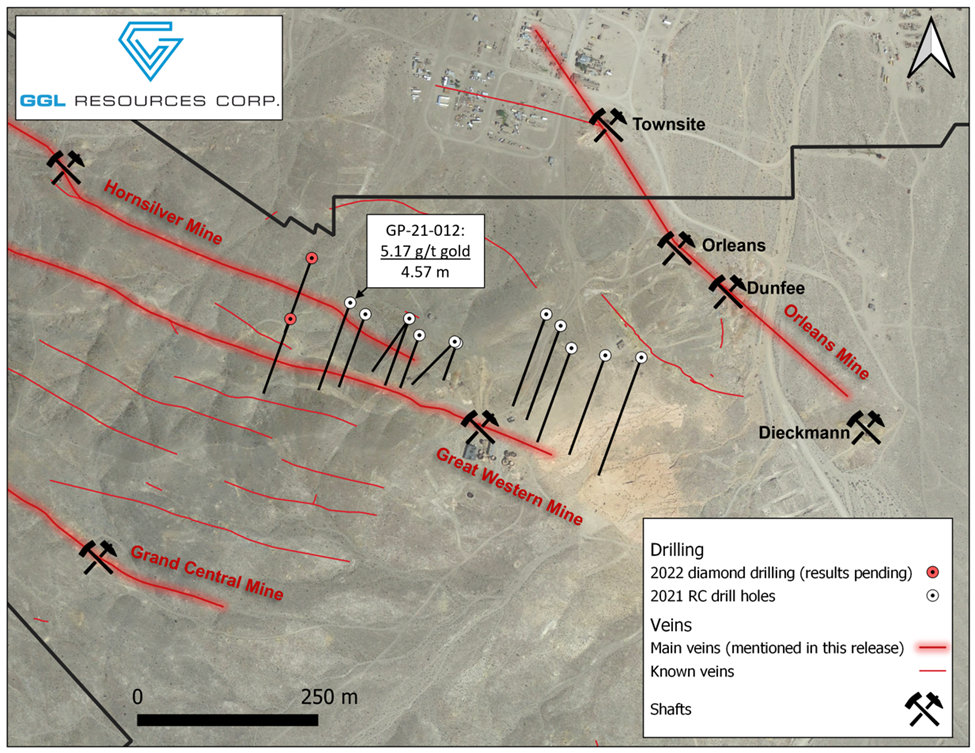 Technical information in this news release has been reviewed and approved by Matthew R. Dumala, P.Eng., a geological engineer with Archer, Cathro & Associates (1981) Limited and a qualified person for the purposes of National Instrument 43-101.

GGL is a seasoned, Canadian-based junior exploration company, focused on the exploration and advancement of under evaluated mineral assets in politically stable, mining friendly jurisdictions. The Company has optioned and wholly owned claims in the Gold Point district of the prolific Walker Lane Trend, Nevada. The Gold Point claims cover several gold-silver veins, four of which host past producing high-grade mines. The Company also owns the McConnell gold-copper project located 22 kilometers southeast of the Kemess Mine in north-central BC, and promising diamond exploration projects in Nunavut and the Lac de Gras diamond district of the Northwest Territories. Lac de Gras is home to Canada's first two diamond mines, the world class Diavik and Ekati mines discovered in the 1990s. GGL also holds diamond royalties on mineral leases near the Gahcho Kué diamond mine in the Northwest Territories.

For further information concerning GGL Resources Corp. or its various exploration projects please visit our website at www.gglresourcescorp.com or contact:

Information contained in this news release contains forward-looking statements. These statements reflect management's current estimates, beliefs, intentions and expectations; they are not guarantees of future performance. Forward-looking statements are statements that are not historical facts and are generally, but not always, identified by the words "evaluate", "potential", "likely", "possible", "cut-off grades", "mineralized shoots", and similar expressions, or that events or conditions "may", "could" or "will" occur. GGL cautions that all forward-looking statements are inherently uncertain, and that actual performance may be affected by a number of material factors, many of which are beyond the control of GGL. Such factors include, among other things: risks and uncertainties relating to exploration and development and the results thereof, including the results of the recently completed drill program, the impact on future mineral resource estimates, the potential for new discoveries, and the results of future metallurgical programs, as well as the ability of GGL to obtain additional financing, the need to comply with environmental and governmental regulations, fluctuations in the prices of commodities, operating hazards and risks, competition and other risks and uncertainties, including those described in GGL's financial statements available under the GGL profile at www.sedar.com. Accordingly, actual and future events, conditions and results may differ materially from the estimates, beliefs, intentions and expectations expressed or implied in the forward-looking information. Except as required under applicable securities legislation, GGL undertakes no obligation to publicly update or revise forward-looking information.