Use of this site indicates acceptance of the Privacy Policy and Terms of Use.
The information on this Website is not reliable and not intended to provide tax, legal, or investment advice. Nothing contained on the Website shall be considered a recommendation, solicitation, or offer to buy or sell a security to any person in any jurisdiction.
CEO.CA members discuss high-risk penny stocks which can lose their entire value. Only risk what you can afford to lose.
© 2022 - CEO.CA Technologies Ltd.
@accesswire/aston-bay-reports-new-high-priority-em-targets-at-the ↻
0 online
Today This week
Search Subscribe
Members of @accesswire/aston-bay-reports-new-high-priority-em-targets-at-the

The 2021 EM surveys, commissioned by Aston Bay's partner American West Metals Limited ("American West"), targeted extensions along strike and at depth of known mineralization, and followed up on previous geophysical anomalies. The surveys were completed in August 2021 to enhance existing targets and identify new potential drill targets ahead of the proposed 2022 drilling campaign. Previous EM surveys have successfully identified several strong conductive anomalies that are associated with known copper mineralization in the Storm Project area, including a large conductive anomaly associated with the high-grade 4100N Zone (intercepts include 67.6 m @ 1.33% Cu from 43.4 m in hole ST99-47).

Thomas Ullrich, CEO of Aston Bay commented, "The initial results of the 2021 geophysical surveys demonstrate the efficacy of ground EM as an exploration tool at Storm, and further reinforce our belief that undiscovered, blind zones of high-grade copper mineralization exist in underexplored areas of the Project. Utilizing modern instrumentation capable of resolving anomalies with improved resolution and at greater depth than previous surveys has enabled our partners at American West to identify multiple new conductors warranting follow up work, including several drill-ready targets. We look forward to continuing our work with American West's technical team to refine targets identified by the 2021 survey, and to plan additional geophysical surveys and new targets ahead of a proposed 2022 drill campaign."

Seven untested shallow conductors of interest were identified (Figures 1 and 2; dark blue rectangles): two east along strike from the 2200N and 2750N zones, two west-northwest along strike from the 4100N Zone, one immediately west of the drilled area of the 4100N Zone conductive anomaly, one northeast of the 4100N Zone, and one northeast of the 3500N Zone. All seven untested shallow conductors are located along or in close proximity to the bounding faults of the Storm graben, in areas of elevated density identified by the 2017 airborne gravity gradiometry (AGG) survey (see Aston Bay News Releases dated November 30, 2017 and June 21, 2018). The conductors east of the 2200N and 2750N zone are also associated with significant copper in soil geochemical anomalies.

Seven untested deeper conductors of interest were also identified in the Storm Copper area (Figures 1 and 2; dark green rectangles). These broad, low-amplitude anomalies are generally at least partially associated with areas of elevated density identified by the 2017 AGG survey. Six of the seven anomalies are located along or adjacent to the bounding faults of the Storm graben. The geometry and mostly gentle dips of the modelled deep conductors suggest that they may be related to stratiform type targets, and may be indicative of traditional sedimentary type copper mineralization at depth. Given the highly resistive nature of the host dolomites, even subtle conductors are considered to be prospective when combined with coincident geochemical or airborne gravity anomalies. 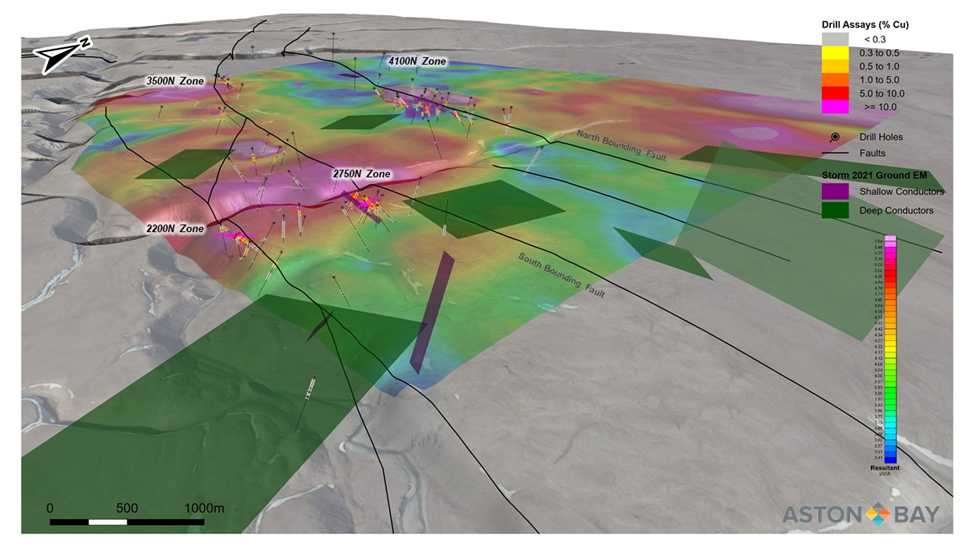 Two distinct types of mineralization have been discovered at the Project to date (Figure 3).

The copper mineralization at Storm is chalcocite dominant and occurs as massive sulphides in breccias and veinlets within, or immediately adjacent to, sub-vertical faults. Although chalcocite (and chalcopyrite) are relatively low in conductance (when compared to some other sulphides), the dolomite host rocks generally have no EM response and therefore the contrast between the two is sufficient to allow EM to be an effective targeting tool.

The are no other conductive lithologies present in the Storm area, which increases the confidence that any anomalies may be related to copper mineralization.

The mineralization present within the Seal Deposit is stratabound where sphalerite occurs as massive sulphide replacement of the host dolomite and sandstone cements. Sphalerite and the host rocks generally have very low conductivity, and a test survey was completed to confirm if any contrasts between the different units were visible. A number of geophysical techniques have been used to explore the Storm and Seal Project areas and wider tenure since the first copper and zinc discoveries in the early 1990's.

Electromagnetics were proven to be an effective exploration tool when the Storm area was first surveyed with airborne EM in 1997. This survey determined a clear relationship between known, outcropping copper mineralization with newly identified EM anomalies. Subsequent higher resolution airborne and surface EM surveys, backed up by drilling, further confirmed this association.

The 2021 EM surveys utilised a time domain electromagnetic (TDEM) system featuring low noise / high power and were completed using a fixed conventional loop configuration. A total area of approximately 18km2 was completed for 945 stations, with a nominal station spacing of 100m at the Storm Copper prospect and 50m at the Seal Zinc deposit. Infills on a number of prospects at Storm were completed at 50m spacings.

The results of three EM survey lines over the high-grade zinc-silver Seal deposit indicated that the known mineralization at Seal is not visible to this particular EM system, and therefore no anomalies could be identified in the vicinity of the deposit. While this work does not preclude other EM systems effectively being used to explore around Seal, the nearby Tier 1 Polaris Zinc-Lead deposit was discovered using gravity surveys, and this will continue to be the preferred geophysical tool for testing the extensive Seal stratigraphic horizon.

Further ground EM surveys will be planned for the 2022 season to screen the Tornado and Blizzard areas. These areas lie east along strike from Storm and have existing copper in soil and gravity (AGG) anomalies.

The 2021 Storm Project surface time domain electromagnetic (TDEM) survey was completed using a fixed conventional loop configuration (in and out of loop), with a nominal station spacing of 100 m with 50 m infills at the Storm Copper prospect, and 50 m at the Seal Zinc deposit. Storm loops 1 through 10 were sized 1,000 m by 1,000 m oriented at a 0° azimuth. Seal loop 11 was sized 400 m by 200 m oriented at a 45° azimuth. A Geonics TEM57 MK-2 transmitter with TEM67 boosters was used in conjunction with a portable Honda generator to produce a maximum output of 1.2 kW or 20 A or 60V. The Storm loops carried a current of 13-14 A and the Seal loop carried a current of 19.5 A. An ARMIT Mk2.5 sensor and EMIT SMARTem 24 receiver were used to measure and collect vertical (Z) and horizontal (X and Y) components of the B-Field and its partial derivative dB/dt. EMIT Maxwell software was used for QC, data processing, modelling, presentation and interpretation of the results. Seequent Montaj software was used for additional interpretation and to produce coloured maps.

Prior to the survey, the transmitter and generator were checked for maximum output using calibrated loads. Receivers were calibrated and synchronized to the transmitter prior to and during data acquisition. Polarity of the primary field components was checked and corrected, as necessary. All data were inspected, validated, and inspected for abnormal or problematic noise. No abnormal or problematic noise was observed.

About the Storm Project

The Storm Project consists of 117 contiguous mining claims and 6 prospecting permits covering an area of approximately 302,725 hectares on Somerset Island, Nunavut, Canada. The Storm Project comprises both the Storm Copper Project, a high-grade sediment hosted copper discovery (intersections including 110m @ 2.45% Cu from surface and 56.3m @ 3.07% Cu from 12.2m) as well as the Seal Zinc Deposit (intersections including 18.8m @ 10.58% Zn, 28.7g/t Ag from 51m and 22.1m @ 6.62% Zn, 27.1g/t Ag from 27.1m). As well, there are numerous underexplored targets/prospects within the 120km strike length of the mineralized trend, including the Tornado copper prospect where 10 grab samples yielded >1% Cu up to 32% Cu in gossans.

American West Metals Limited has an option to earn an 80% interest in the Storm Project (see March 9, 2021, Aston Bay press release), and is sole funding the exploration activity currently underway.

For more information on the Storm Project, see the technical report "Initial Mineral Resource Estimate and Technical Report for the Seal Zinc Deposit, Aston Bay Property, Somerset Island Nunavut" by P&E Mining Consultants Inc. dated January 17, 2018 with an effective date of October 6, 2017, which was filed on the Company's SEDAR profile on January 17, 2018.

Michael Dufresne, M.Sc., P.Geol., P.Geo., is a qualified person as defined by National Instrument 43-101 and has reviewed and approved the scientific and technical information in this press release.

Aston Bay is a publicly traded mineral exploration company exploring for gold and base metal deposits in Virginia, USA, and Nunavut, Canada. The Company is led by CEO Thomas Ullrich with exploration in Virginia directed by the Company's advisor, Don Taylor, the 2018 Thayer Lindsley Award winner for his discovery of the Taylor Pb-Zn-Ag Deposit in Arizona.

The Company has acquired the exclusive rights to an integrated dataset over certain prospective private lands and has signed agreements with timber and land companies and other private landowners which grants the company the option to lease the mineral rights to over 10,000 acres of land located in central Virginia. These lands are located within a gold-copper-lead-zinc mineralized belt prospective for mesothermal gold deposits and Virginia gold-pyrite belt deposits, as well as VMS, sedimentary exhalative (SEDEX) and Broken Hill (BHT) type base metal deposits. Don Taylor, who led the predecessor company to Blue Ridge and assembled the dataset, has joined the Company's Advisory Board and will be directing the Company's exploration activities for the Blue Ridge Project. The Company is actively exploring the Buckingham Gold and Mountain Base Metals Projects in Virginia and is in advanced stages of negotiation on other lands in the area.

The Company is also 100% owner of the property Storm Project, which hosts the Storm Copper Project and the Seal Zinc Deposit and has been optioned to American West Metals Limited.

American West is a new Australian company with a vision to build a modern and clean base metals business. The Company recently completed its IPO and listed its securities on the Australian Securities Exchange (ASX) on 13 December 2021 under ASX ticker AW1.

American West has acquired an interest in three base metals projects in North America which it believes have potential to generate significant economic resource inventories and robust mining proposals:
1. The West Desert Project in Utah, USA;
2. The Storm Copper and Seal Zinc Projects in Nunavut, Canada; and
3. The Copper Warrior Project in Utah, USA.