Use of this site indicates acceptance of the Privacy Policy and Terms of Use.
The information on this Website is not reliable and not intended to provide tax, legal, or investment advice. Nothing contained on the Website shall be considered a recommendation, solicitation, or offer to buy or sell a security to any person in any jurisdiction.
CEO.CA members discuss high-risk penny stocks which can lose their entire value. Only risk what you can afford to lose.
© 2021 - CEO.CA Technologies Ltd.
@accesswire/aston-bay-commences-drilling-on-its-mountain-base-metals ↻
0 online
Today This week
Search Subscribe
Members of @accesswire/aston-bay-commences-drilling-on-its-mountain-base-metals

by @accesswire on 25 Aug 2021, 07:00
Aston Bay Commences Drilling on its Mountain Base Metals Project, Virginia, USA

The current drill program comprises initial drill testing of several electromagnetic (EM) and magnetic anomalies delineated by reinterpretations of historic airborne and ground geophysical surveys on the property (Figure 1). The highest priority target (TZ-3) is an airborne EM conductor anomaly 2.2 kilometers (km) in strike length, contained entirely within the property and confirmed by well-defined ground EM anomalies (Figure 2). The conductor is also coincident with anomalous surficial soil anomaly trends and rock chip analyses of up to 0.26% Cu and 0.37% Zn.

Two historic drill holes targeted the anomaly, yielding 1.12% Zn and 0.74% Pb over a 4.6 m interval in core in 2013 and 0.82% Zn over a 0.43m core interval in 1999. The historical drilling did not fully explain the conductivity anomalies as subsequent geophysical reinterpretations suggest neither drill hole intersected the anomaly. Furthermore, the historical drilling only tested the TZ-3 conductor on a single section and the remainder of the 2.2km strike length of the feature represents a compelling target with respect to base metal mineralization on the property.

Downhole EM surveys will be conducted on all drillholes. Fixed loop TDEM (time domain electromagnetic method) surficial surveys are planned for secondary targets on the property.

"We are excited to test this large anomaly in this initial round of drilling," stated Thomas Ullrich, CEO of Aston Bay. "The anomalous copper and zinc in the surface sampling coincident with significant intersection of lead and zinc mineralization in the historical drilling make this a compelling target for copper in addition to lead and zinc mineralization. These SEDEX- or VMS-type base metal deposits are often found with zinc and lead margins on a copper-bearing polymetallic core. The absence of graphite or significant amounts of other conductive material in the historical drilling suggests that the conductor remains untested at depth. Our program of deeper holes targeted using a modern reinterpretation of historical geophysical data is designed to intersect the conductor, with follow-up borehole EM surveys to guide placement of planned subsequent drillholes."

Don Taylor, Aston Bay advisor and part of the original team that identified the potential in this belt of Virginia, commented, "To finally be in a position to drill this high quality/high potential target after many years of set up is exciting. The Mountain target is the strongest EM anomaly in the belt identified to date, the anomaly is supported by anomalous base metals and geologic mapping and shallow drilling indicate the anomaly is not related to graphite. It will be an exciting series of drill holes." 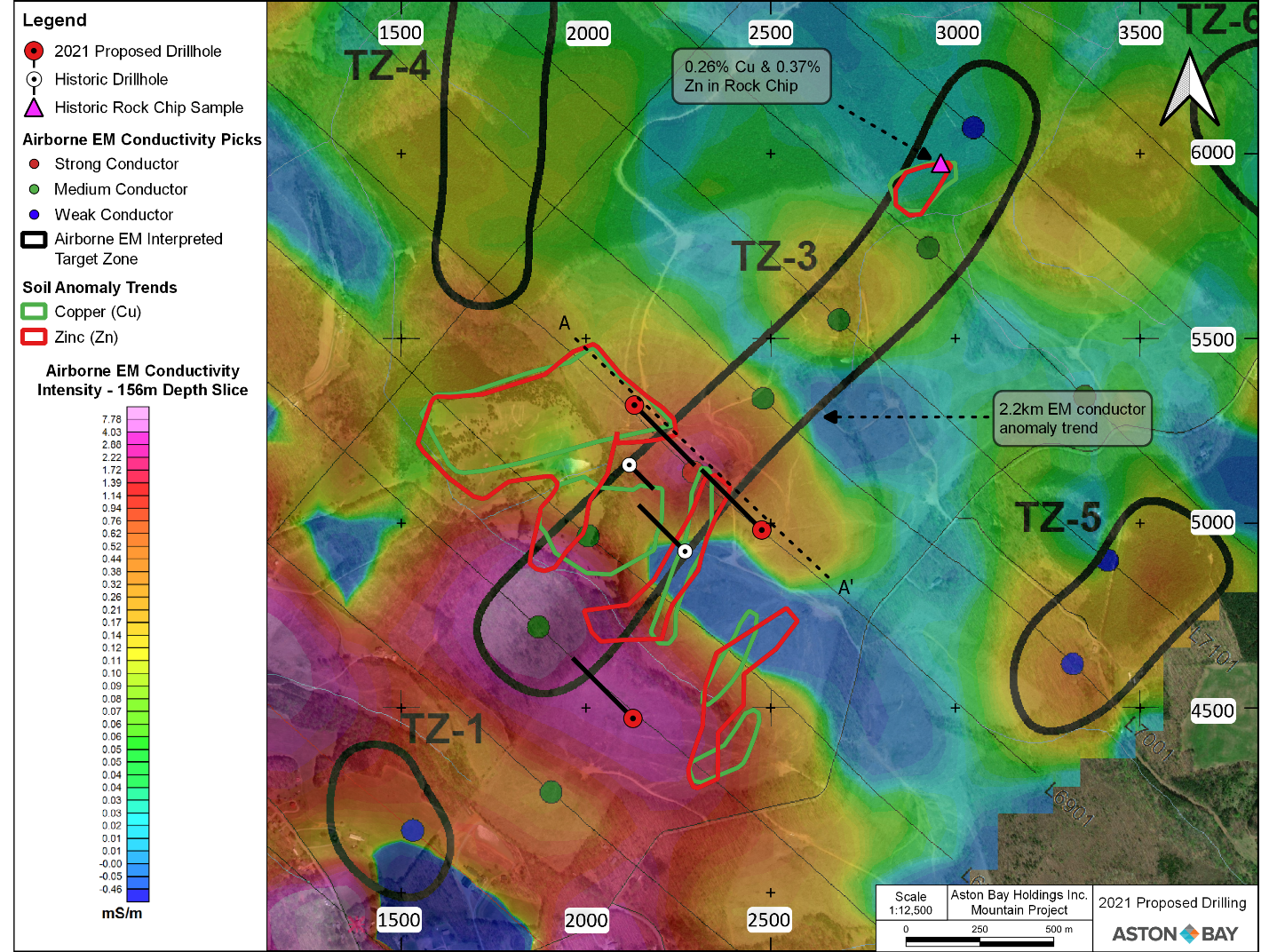 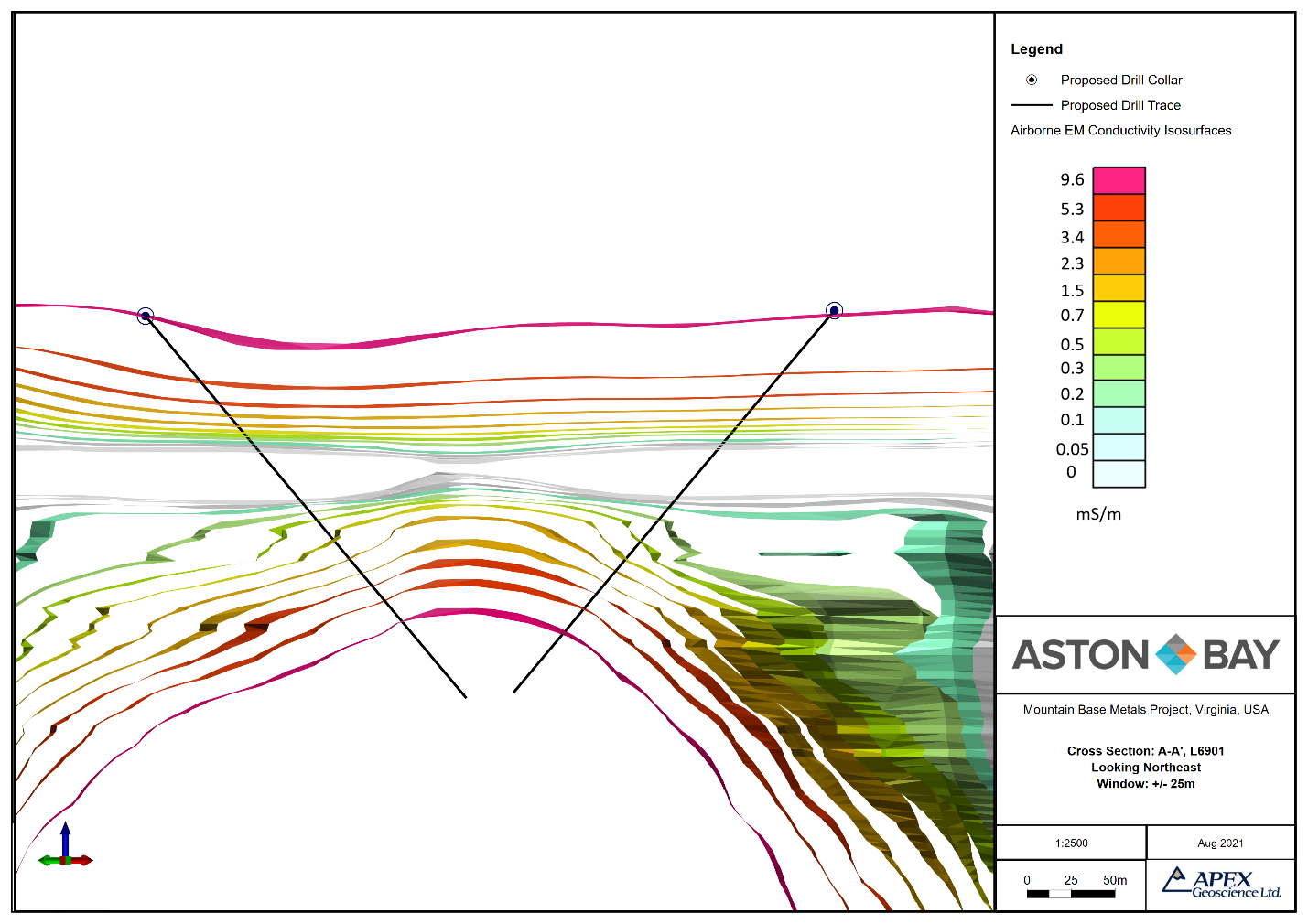 QUALIFIED PERSON
As per National Instrument 43-101 Standards of Disclosure for Mineral Projects, Andrew Turner, P.Geol., a consultant to Aston Bay, is the Qualified Person for the Company and has prepared, validated and approved the technical and scientific content of this news release. The Company strictly adheres to CIM Best Practices Guidelines in conducting, documenting, and reporting its exploration activities.

ABOUT ASTON BAY HOLDINGS LTD.
Aston Bay is a publicly traded mineral exploration company exploring for gold and base metal deposits in Virginia, USA, and Nunavut, Canada. The Company is led by CEO Thomas Ullrich with exploration in Virginia directed by the Company's advisor, Don Taylor, the 2018 Thayer Lindsley Award winner for his discovery of the Taylor Pb-Zn-Ag Deposit in Arizona.

The Company has the exclusive option to lease the mineral rights to over 10,000 acres of prospective private land located in central Virginia. These lands are located within a gold-copper-lead-zinc mineralized belt prospective for mesothermal gold deposits and Virginia gold-pyrite belt deposits, as well as VMS, sedimentary exhalative (SEDEX) and Broken Hill (BHT) type base metal deposits. Don Taylor, who led the predecessor company to Blue Ridge and assembled the dataset, has joined the Company's Advisory Board and will be directing the Company's exploration activities for the Blue Ridge Project. The Company is actively exploring the Buckingham Gold Project in Virginia and is in advanced stages of negotiation on other lands in the area.

The Company is also 100% owner of the property Storm Project, which hosts the Storm Copper Project and the Seal Zinc Deposit and has been optioned to American West Metals Limited.