Use of this site indicates acceptance of the Privacy Policy and Terms of Use.
The information on this Website is not reliable and not intended to provide tax, legal, or investment advice. Nothing contained on the Website shall be considered a recommendation, solicitation, or offer to buy or sell a security to any person in any jurisdiction.
CEO.CA members discuss high-risk penny stocks which can lose their entire value. Only risk what you can afford to lose.
© 2022 - CEO.CA Technologies Ltd.
@globenewswire/golden-sky-expands-mineralized-footprint-to-3-km-x ↻
0 online
Today This week
Search Subscribe
Members of @globenewswire/golden-sky-expands-mineralized-footprint-to-3-km-x

VANCOUVER, British Columbia, Aug. 30, 2022 (GLOBE NEWSWIRE) -- Golden Sky Minerals Corp. (AUEN.V) (the “Company” or “Golden Sky”) is pleased to announce the results from Phase 1 of the 2022 soil geochemical sampling and prospecting program, conducted on its 100% owned Rayfield Property (“the Property”) in southern British Columbia. The program included collection of ~600 B-horizon soil samples within the Rayfield Copper Zone that encompassed an area of ~7 km2. In addition to the soil samples, a total of 58 rock samples were collected across the ~25,000-hectare property and submitted for both geochemical and lithogeochemical analysis. This program was designed to further expand a laterally extensive copper copper-in-soil anomaly (Rayfield Copper Zone) outlined from the 2021 soil sampling program (see March 30th, 2022 News Release) and to delineate any newly identified regional targets through prospecting and geological mapping.

“We are very pleased with the scale of the mineralized system that we are observing on the Rayfield Property,” stated Cameron Dorsey, VP Exploration of Golden Sky. “Our systematic approach towards exploration is starting to delineate what could be a very large mineralized porphyry system at the Rayfield Copper Zone that remains open along-strike and to depth. The sheer size of the copper-in-soil anomaly, combined with similar geological, geochemical, and geophysical characteristics shared with other alkalic porphyries in the Quesnel Terrane, makes this zone a very compelling drill target.” 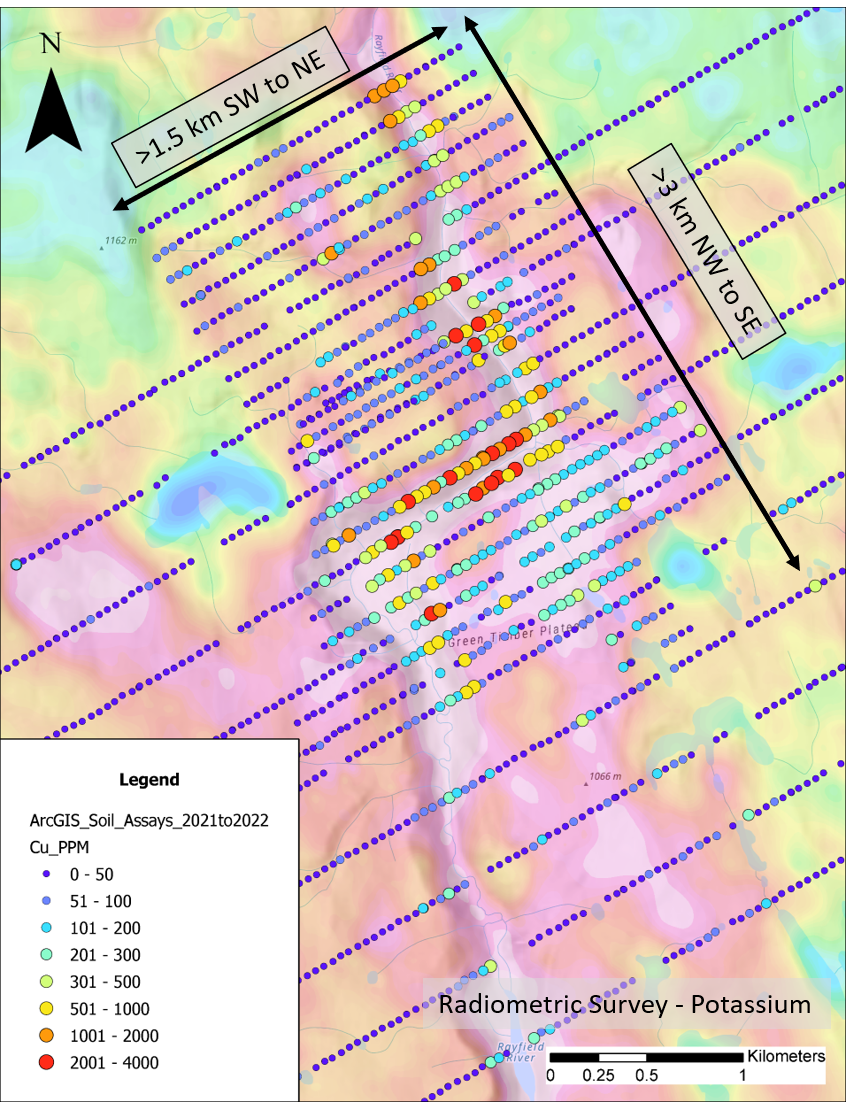 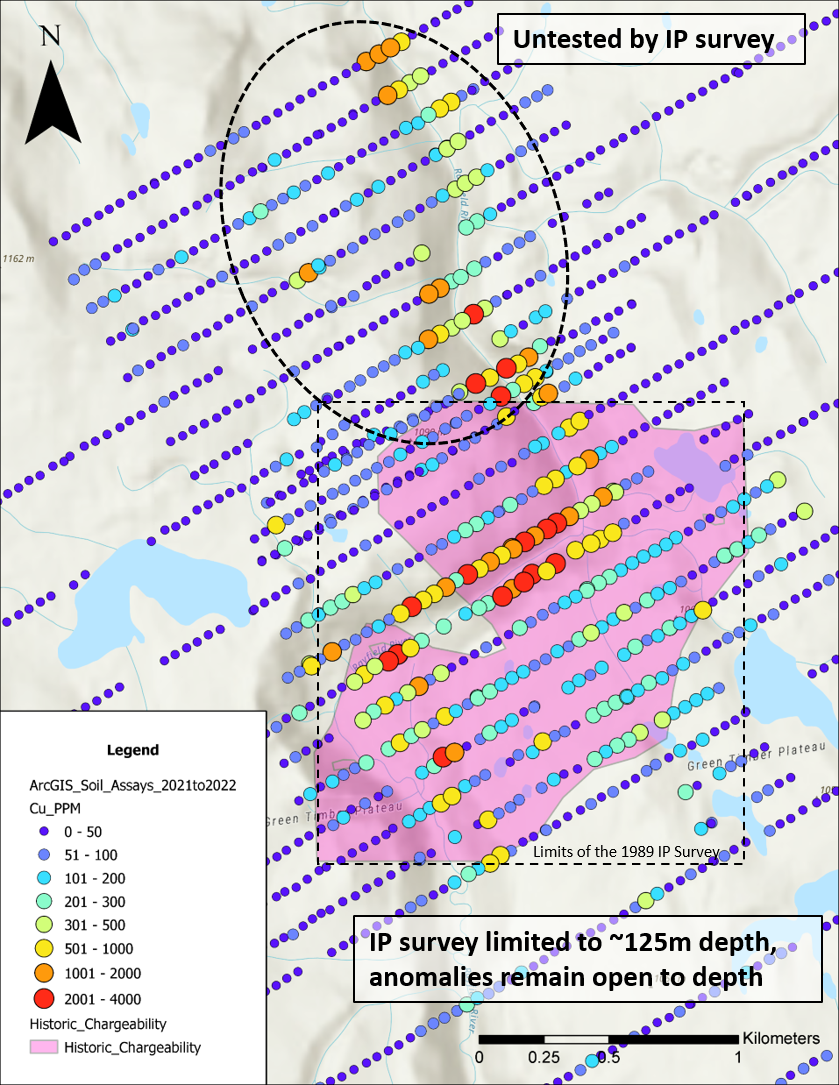 Figure 2: Copper-in-soil assays closely associated with a shallow induced polarization survey (IP) conducted in 1989 (chargeability of 5.0 milliseconds). The copper-in-soil anomaly to the north remains untested by an IP Survey. 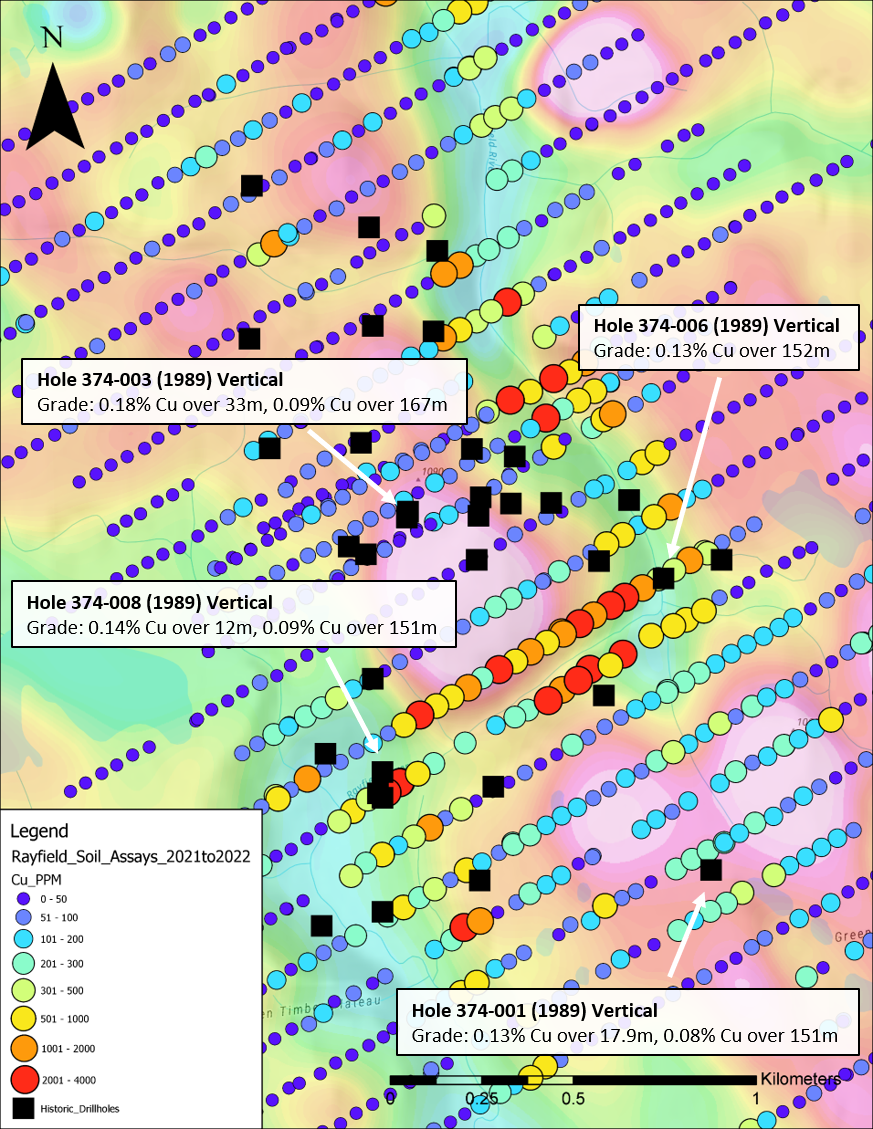 Figure 3: Copper-in soil assays overlaying 1VD airborne magnetics. Many of the elevated copper assays are closely associated with some of the best intercepts from historic diamond drilling. Many anomalous copper-in-soil zones remain underexplored by diamond drilling as the majority of drillholes were shallow and vertical. 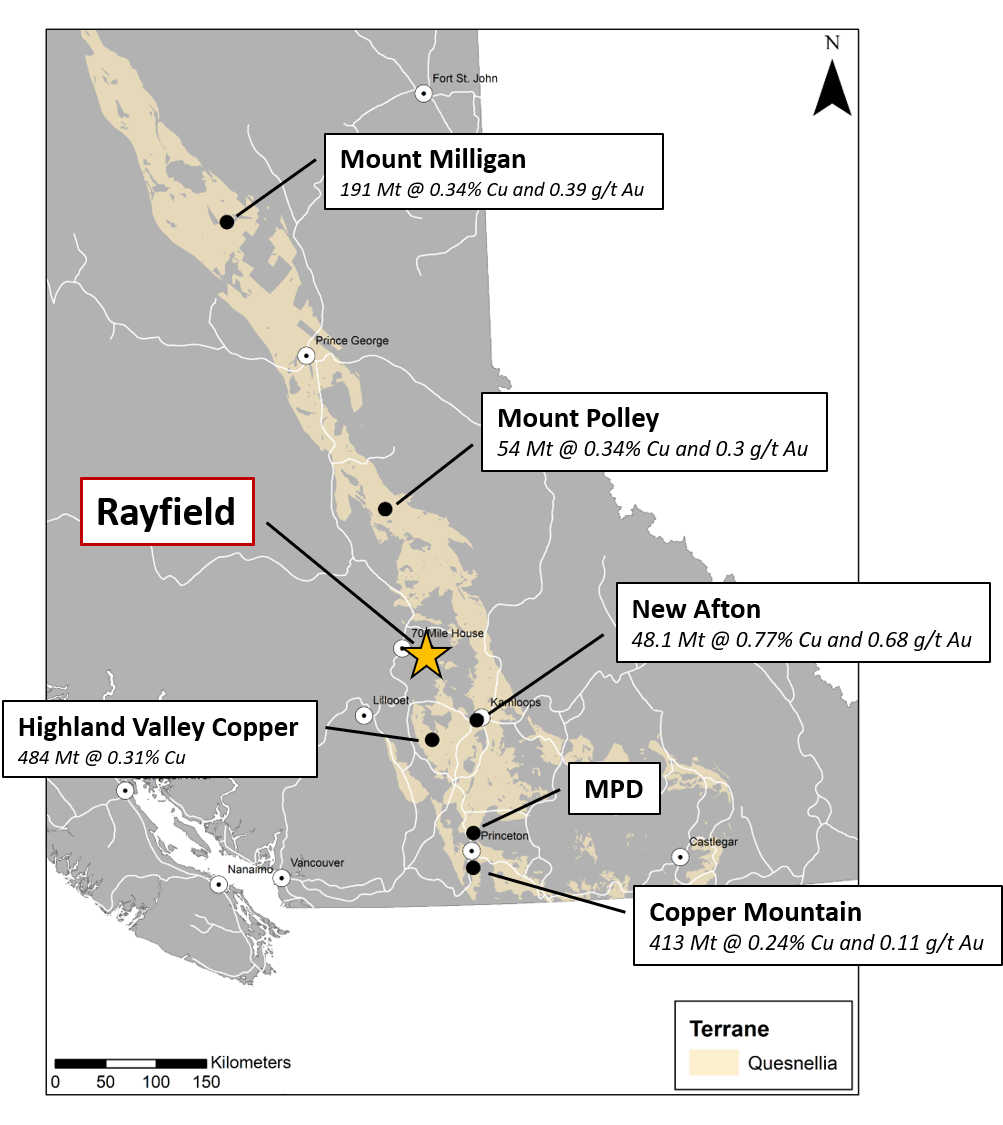 Figure 4: Rayfield Copper-Gold Project in relation to major projects in the Quesnel Trough.

John Newell, President and CEO of Golden Sky Minerals, states, “We are very pleased with the continued advancement of the Rayfield property, with excellent results from soil sampling, rock sampling, and geological mapping, as we prepare the property for its inaugural drill campaign later in 2022. A little more than one year has passed since staking the Rayfield Project, and the Golden Sky Minerals Corp. geological crew, led by Cameron Dorsey VP Exploration, have rapidly developed their understanding of the property with solid boots-on-the-ground field work and utilizing modern exploration techniques. This has led to the Rayfield Project growing from ~11,000-hectares to more than double in size to ~25,000 hectares. We are encouraged that this work is just the beginning of exposing the property’s tremendous potential to host a large copper-gold porphyry system.” 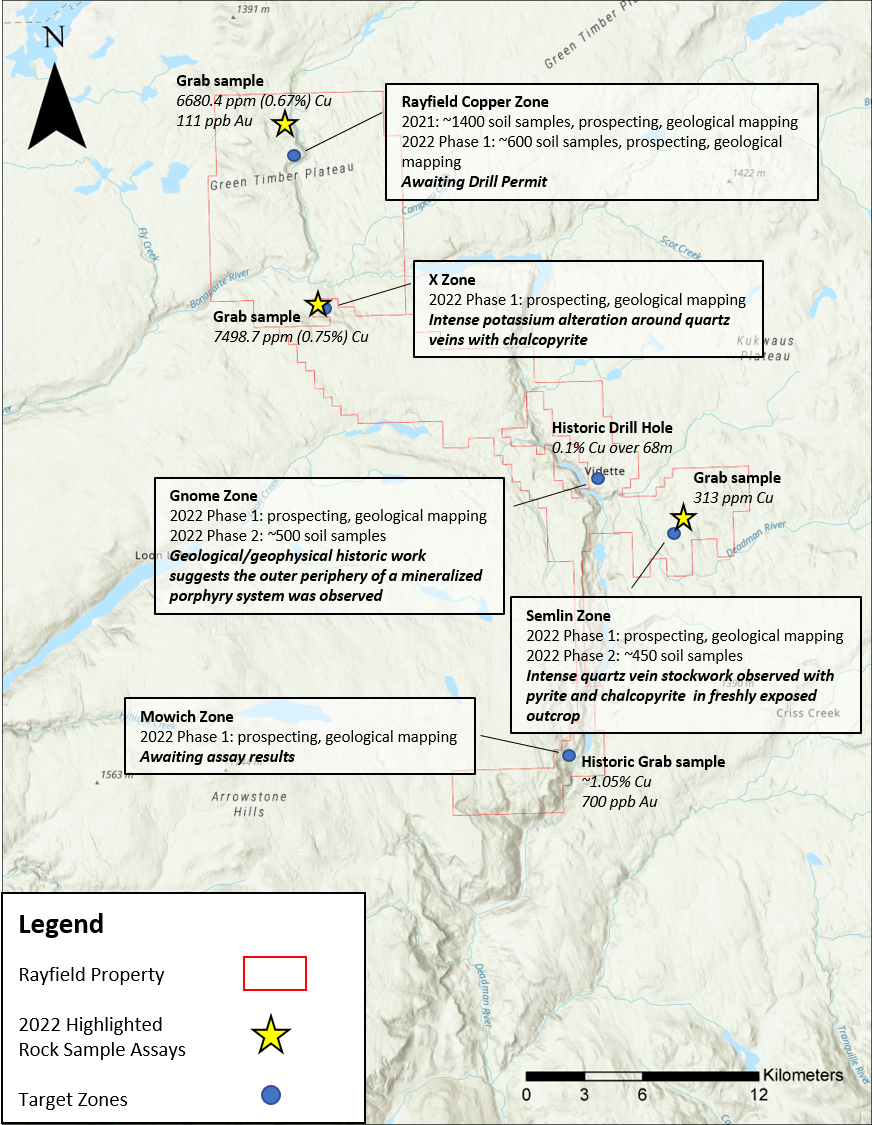 Figure 5: The Rayfield Property has been expanded to ~25,000-hectares and now encompasses several new target zones. All zones are at various stages of exploration with several higher-grade samples collected in Phase 1 of 2022.

Golden Sky Minerals Corp. is a well-funded junior grassroots explorer engaged in the acquisition, assessment, exploration, and development of mineral properties located in highly prospective areas and mining-friendly districts. Golden Sky’s mandate is to develop its portfolio of projects to the mineral resource stage through systematic exploration.

The drill-ready projects include Hotspot, Bullseye, and Lucky Strike, all in Yukon, Canada. In addition, the recent purchases of the Rayfield Copper-Gold Project in southern British Columbia, and the staking of the Eagle Mountain Gold Project in the Cassiar Gold District in northern British Columbia, add to the company’s substantial early-stage Canadian project pipeline.

The company was incorporated in 2018 and is headquartered in Vancouver, British Columbia, Canada.

More information can be found at the Company’s website at www.goldenskyminerals.com

Carl Schulze, P. Geo., Consulting Geologist with Aurora Geosciences Ltd, is a qualified person as defined by National Instrument 43-101 for Golden Sky’s British Columbia exploration projects, and has reviewed and approved the technical information in this release.

Statements contained in this news release that are not historical facts are “forward-looking information” or “forward-looking statements” (collectively, “Forward-Looking Information”) within the meaning of applicable Canadian securities legislation. In certain cases, Forward-Looking Information can be identified by the use of words and phrases such as “anticipates”, “expects”, “understanding”, “has agreed to” or variations of such words and phrases or statements that certain actions, events or results “would”, “occur” or “be achieved”. Although Golden Sky has attempted to identify important factors and risks that could affect Golden Sky and may cause actual actions, events or results to differ materially from those described in Forward-Looking Information, there may be other factors and risks that cause actions, events or results not to be as anticipated, estimated or intended, including, without limitation: inherent risks involved in the exploration and development of mineral properties; the uncertainties involved in interpreting drill results and other exploration data; the potential for delays in exploration or development activities; the geology, grade and continuity of mineral deposits; the possibility that future exploration, development or mining results will not be consistent with Golden Sky’s expectations; accidents, equipment breakdowns, title and permitting matters; labour disputes or other unanticipated difficulties with or interruptions in operations; fluctuating metal prices; unanticipated costs and expenses; uncertainties relating to the availability and costs of financing needed in the future, including to fund any exploration programs on its projects; that Golden Sky may not be able to confirm historical exploration results and other risks set forth in Golden Sky's public filings at www.sedar.com. In making the forward-looking statements in this news release, Golden Sky has applied several material assumptions, including the assumption that general business and economic conditions will not change in a materially adverse manner. There can be no assurance that Forward-Looking Information will prove to be accurate, as actual results and future events could differ materially from those anticipated in such statements. Accordingly, readers should not place undue reliance on Forward-Looking Information. Except as required by law, Golden Sky does not assume any obligation to release publicly any revisions to Forward-Looking Information contained in this news release to reflect events or circumstances after the date hereof or to reflect the occurrence of unanticipated events.

Graphics accompanying this announcement are available at
https://www.globenewswire.com/NewsRoom/AttachmentNg/16cdfe0a-9fb8-424c-b408-09afef9a1652 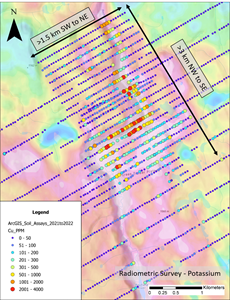 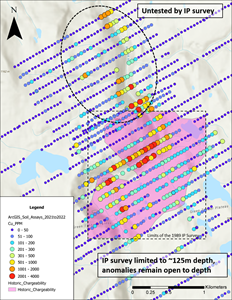 Copper-in-soil assays closely associated with a shallow induced polarization survey (IP) conducted in 1989 (chargeability of 5.0 milliseconds). The copper-in-soil anomaly to the north remains untested by an IP Survey. 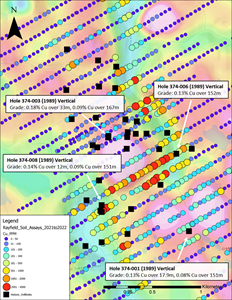 Copper-in soil assays overlaying 1VD airborne magnetics. Many of the elevated copper assays are closely associated with some of the best intercepts from historic diamond drilling. Many anomalous copper-in-soil zones remain underexplored by diamond drilling as the majority of drillholes were shallow and vertical. 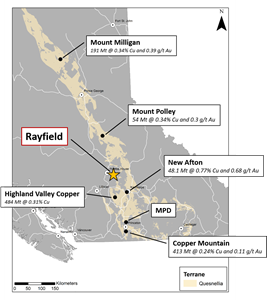 Rayfield Copper-Gold Project in relation to major projects in the Quesnel Trough. 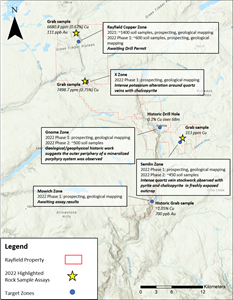 The Rayfield Property has been expanded to ~25,000-hectares and now encompasses several new target zones. All zones are at various stages of exploration with several higher-grade samples collected in Phase 1 of 2022.