Use of this site indicates acceptance of the Privacy Policy and Terms of Use.
The information on this Website is not reliable and not intended to provide tax, legal, or investment advice. Nothing contained on the Website shall be considered a recommendation, solicitation, or offer to buy or sell a security to any person in any jurisdiction.
CEO.CA members discuss high-risk penny stocks which can lose their entire value. Only risk what you can afford to lose.
© 2022 - CEO.CA Technologies Ltd.
@globenewswire/atlas-upgrades-american-listing ↻
0 online
Today This week
Search Subscribe
Members of @globenewswire/atlas-upgrades-american-listing

DTC is a subsidiary of the Depository Trust & Clearing Corporation, a U.S. company that manages the electronic clearing and settlement of publicly traded companies. Securities that are eligible to be electronically cleared and settled through DTC are considered to be “DTC eligible”.

With DTC eligibility, existing investors benefit from potentially greater liquidity and execution speeds. This also opens the door to new investors that may have been previously restricted from the company’s common shares and greatly simplifies the process of trading common shares in the United States.

Atlas also recently upgraded from the OTC Pink Market to the OTCQB® Venture Market (“REMRF”) to complement its TSX Venture listing under the symbol “SALT”.

Mr. Rowland Howe, Atlas President, commented: “As we prepare to bring more American and global awareness to the premier undeveloped salt project in North America, DTC eligibility combined with our recent upgrade to the OTCQB represents Atlas’ commitment to increasing visibility and accessibility for existing shareholders in the United States and potential new investors there.”

Mr. Howe added, “We look forward to soon providing investors with a significant Great Atlantic Project update. More than ever it’s apparent that Great Atlantic has the potential to become a crown jewel in the heart of the robust North American road salt sector in the midst of a domestic production shortfall.”

Atlas Salt President discusses the Great Atlantic Project from Western Newfoundland - click on the link below to view. 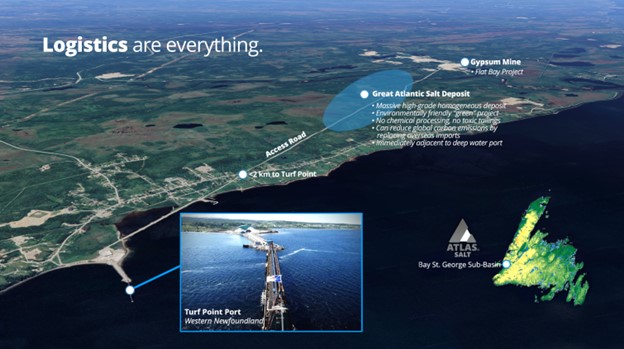 Atlas Salt is a TSV Venture 50 company and owns 100% of the Great Atlantic salt deposit strategically located in Western Newfoundland in the middle of the robust eastern North America road salt market. The project features a large homogeneous high-grade resource advancing through the Feasibility Stage. Atlas Salt is also the largest shareholder of Triple Point Resources which owns the Fischell’s Brook Salt Dome and other mineral licenses in Western Newfoundland prospective for salt dome-type deposits. Triple Point has applied to list on the Canadian Stock Exchange (CSE).

A photo accompanying this announcement is available at https://www.globenewswire.com/NewsRoom/AttachmentNg/a5d70846-61de-4b0b-a1aa-ae19fa1d6c29 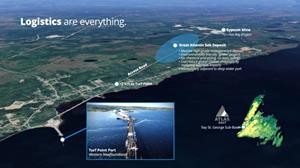