Use of this site indicates acceptance of the Privacy Policy and Terms of Use.
The information on this Website is not reliable and not intended to provide tax, legal, or investment advice. Nothing contained on the Website shall be considered a recommendation, solicitation, or offer to buy or sell a security to any person in any jurisdiction.
CEO.CA members discuss high-risk penny stocks which can lose their entire value. Only risk what you can afford to lose.
© 2022 - CEO.CA Technologies Ltd.
@globenewswire/angus-gold-commences-summer-drilling-on-bif-discoveries ↻
0 online
Today This week
Search Subscribe
Members of @globenewswire/angus-gold-commences-summer-drilling-on-bif-discoveries

TORONTO, July 11, 2022 (GLOBE NEWSWIRE) -- Angus Gold Inc. (TSX-V: GUS | OTC: ANGVF) (“Angus” or the “Company”) is pleased to announce that it has commenced summer drilling at its 100%-owned Golden Sky Project located in Wawa, Ontario. The ongoing drill program will initially focus on the two most advanced target areas within the property: the BIF Zone, a large area of banded iron formation that is the site of two significant new gold discoveries made in the 2021 drilling program and the Dorset Deformation Zone, which hosts a historical gold resource with the potential for high-grade mineralized ore shoots. Additional exploration programs are also ongoing on new priority areas identified during the regional work conducted last year and are designed to generate new drill targets to be tested in the fall.

Steve Burleton, Chief Executive Officer of Angus, states: “Given the fantastic results from the previous year’s drill program, we are accelerating our program in 2022 to advance our current gold zones as well as identify new high-priority targets for future drill programs. The Golden Sky project is highly under-explored, and our regional work continues to identify additional structures, surface gold anomalies and geology that have significant potential to generate new exploration catalysts. In addition to the BIF and Dorset, we are currently evaluating three new areas that we expect to bring to drill-readiness before the end of the year. We are well financed to accomplish all of the work needed to advance these targets and crews are in the field now working towards these goals.”

Banded Iron Formation (“BIF”)
The BIF horizon extends for over 5 kilometres within the Angus property and is located approximately 4 kilometres north of the Eagle River Mine of Wesdome Gold. During the 2021 program, two of the four drill holes were successful in intersecting significant gold mineralization spaced approximately 500 metres apart (https://www.angusgold.com/assets/pdf/2022.01-Angus-Gold---News-Release-drill-results-FINAL.pdf). These zones represent the first reported drill discoveries in the BIF and suggest strong potential for the area to host significant BIF-hosted gold mineralization similar to that seen at the large, high-grade deposits of Musselwhite (Newmont), Meadowbank (Agnico-Eagle) and Back River (Sabina) in Ontario and Nunavut. Holes GS21-14 and -15 intersected very thick and consistent zones of gold mineralization characterized by higher-grade intervals within a broader, lower-grade envelope. Hole GS21-14 intersected an extensive zone of gold 61.3 metres wide and grading 0.94 g/t Au starting at a shallow vertical depth of 120 metres. Hole GS21-15, located approximately 500 metres west of Hole GS21-14, also intersected a thick zone of mineralization and returned 18.7 metres of 1.0 g/t Au. Both intersections indicate that a robust gold mineralizing system was active within the BIF and bodes well for expanding current zones and discovering additional zones within the largely unexplored horizon. Drill targets for the current program were generated through a high-power induced polarisation (“IP”) ground geophysical survey with targets prioritized by a follow-up surface geochemical program. The program generated multiple, highly prospective, gold anomalies within the BIF Zone. The current geophysical and geochemical coverage represents only a small portion of the BIF and the Company expects to expand these surveys in 2022.

Dorset Deformation Zone
The Dorset area hosts a historical, low-grade, gold resource, however, within the drilling areas of thick, higher-grade material were noted. The main objective of the current program is to test for high-grade gold structures similar to those seen at Eagle River Mine. Based on the new modeling by Angus, drill hole GS-21-02 was successful in returning the thickest and highest-grade gold intersection drilled on the Dorset Zone to-date, confirming high-grade potential with an interval of 5.4 g/t Au over 9 metres within a broader mineralized zone of 3.3 g/t Au over 22.6 metres at 48.5 metres vertical depth. Structural modeling is currently underway to determine the controls on these higher-grade zones and will be used to generate targets for the second phase of drilling. In addition, geophysical surveys along the host structure, the Mishi Creek Deformation Zone, have identified high-priority targets up to five (5) kilometres to the west, along strike of the historical gold resource and up to one (1) kilometre to the east, which are the current limits of the survey. Management sees significant potential for new discoveries along the deformation zone, some of which will be tested during the 2022 drilling programs. In Q1-2022, the Company completed approximately 1,500 metres of drilling on the Dorset Deformation Zone and assays are still pending.

Regional Exploration Update
Regional exploration programs have also been running concurrently with drilling and have identified multiple targets for follow-up, including new deformation zones, mineralized host rocks and untested regional gold geochemical anomalies. In addition to work on the BIF and Dorset, the following work program in 2022 is planned to upgrade new targets: 1) a detailed structural study of the BIF and Dorset zones is planned to identify controls on gold mineralization and develop a model to drive expanded exploration programs; 2) 18-line kilometres of ground geophysics is planned over newly identified exploration targets; 3) a high definition heliborne magnetics survey is planned to complete the property-scale coverage of the project on the newly acquired ground; 4) a regional mapping and prospecting program is planned to identify new gold targets in areas of geochemical and geological anomalies; and 5) geochemical sampling surveys are also planned to cover the new ground acquired, as well as prioritize new targets along strike of current discoveries in the BIF, Dorset and untested surface showings in other areas of the property.

Please visit www.angusgold.com for additional information on the Project and Company.

The Golden Sky Project
The 100%-owned Golden Sky Project is located within the Mishibishu Lake Greenstone Belt of Northern Ontario, which is host to the high-grade Eagle River and the Mishi open-pit gold mines of Wesdome Gold Mines Ltd. (“Wesdome”). The Company’s 267-square-kilometre land package is located approximately 50 kilometres west of the town of Wawa and is situated immediately between the two Wesdome mines. The project is host to the near-surface Dorset Gold Zone, which contains a historic estimated resource (using a 0.50 g/t Au cut-off) consisting of an indicated resource of 40,000 ounces of gold (780,000 tonnes grading 1.4 g/t Au), and an inferred resource of 180,000 ounces of gold (4,760,000 tonnes grading 1.2 g/t Au). For greater details on the Golden Sky Project, please refer to the NI 43-101 technical report for the Golden Sky Project entitled, “NI 43-101 Technical Report Wawa Property Ontario, Canada” dated February 18, 2020, and available on the Company’s SEDAR profile.

Qualified Person
The scientific and technical content of this press release has been reviewed and approved by Breanne Beh, P.Geo, who is an employee of the Company and a “Qualified Person” as defined by National Instrument 43-101 - Standards of Disclosure for Mineral Projects (“NI 43-101”).

About Angus Gold:
Angus Gold Inc. is a Canadian mineral exploration company focused on the acquisition, exploration, and development of highly prospective gold properties. The Company’s flagship project is the Golden Sky Project in Wawa, Ontario. The Project is immediately adjacent to the Eagle River Mine of Wesdome Gold Mines Ltd.

Directors and insiders currently approximately own 41.4%, Delbrook Capital Advisors Inc. 16.2% and New Gold Inc. (TSX: NGD) 9.9%, each based on the current issued and outstanding common shares of the Company on a non-diluted basis.

On behalf of Angus Gold Inc.,

Neither TSX Venture Exchange nor its Regulation Services Provider (as that term is defined in the policies of the TSX Venture Exchange) accepts responsibility for the adequacy or accuracy of this release. This News Release includes certain “forward-looking statements” which are not comprised of historical facts. Forward-looking statements include estimates and statements that describe the Company’s future plans, objectives or goals, including words to the effect that the Company or management expects a stated condition or result to occur. Forward-looking statements may be identified by such terms as “believes”, “anticipates”, “expects”, “estimates”, “may”, “could”, “would”, “will”, or “plan”. Since forward-looking statements are based on assumptions and address future events and conditions, by their very nature they involve inherent risks and uncertainties. Although these statements are based on information currently available to the Company, the Company provides no assurance that actual results will meet management’s expectations. Risks, uncertainties and other factors involved with forward-looking information could cause actual events, results, performance, prospects and opportunities to differ materially from those expressed or implied by such forward-looking information. Forward-looking information in this news release includes, but is not limited to, the Company’s objectives, goals or future plans, statements, exploration results, potential mineralization, the estimation of mineral resources, exploration and mine development plans, timing of the commencement of operations and estimates of market conditions. Factors that could cause actual results to differ materially from such forward-looking information include, but are not limited to: the ability to anticipate and counteract the effects of COVID-19 pandemic on the business of the Company, including without limitation the effects of COVID-19 on the capital markets, commodity prices supply chain disruptions, restrictions on labour and workplace attendance and local and international travel, failure to receive requisite approvals in respect of the transactions contemplated by the Agreement, failure to identify mineral resources, failure to convert estimated mineral resources to reserves, the inability to complete a feasibility study which recommends a production decision, the preliminary nature of metallurgical test results, delays in obtaining or failures to obtain required governmental, environmental or other project approvals, political risks, inability to fulfill the duty to accommodate First Nations and other indigenous peoples, uncertainties relating to the availability and costs of financing needed in the future, changes in equity markets, inflation, changes in exchange rates, fluctuations in commodity prices, delays in the development of projects, capital and operating costs varying significantly from estimates and the other risks involved in the mineral exploration and development industry, and those risks set out in the Company’s public documents filed on SEDAR. Although the Company believes that the assumptions and factors used in preparing the forward-looking information in this news release are reasonable, undue reliance should not be placed on such information, which only applies as of the date of this news release, and no assurance can be given that such events will occur in the disclosed time frames or at all. The Company disclaims any intention or obligation to update or revise any forward-looking information, whether as a result of new information, future events or otherwise, other than as required by law. 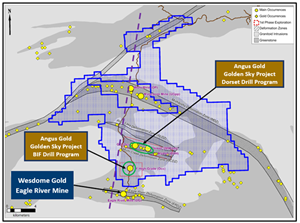 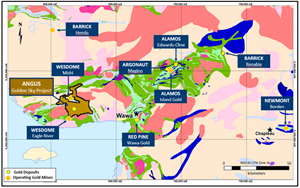