Use of this site indicates acceptance of the Privacy Policy and Terms of Use.
The information on this Website is not reliable and not intended to provide tax, legal, or investment advice. Nothing contained on the Website shall be considered a recommendation, solicitation, or offer to buy or sell a security to any person in any jurisdiction.
CEO.CA members discuss high-risk penny stocks which can lose their entire value. Only risk what you can afford to lose.
© 2022 - CEO.CA Technologies Ltd.
@newswire/group-eleven-announces-start-of-drill-program-and-results ↻
0 online
Today This week
Search Subscribe
Members of @newswire/group-eleven-announces-start-of-drill-program-and-results

VANCOUVER, BC, Feb. 22, 2021 /CNW/ - Group Eleven Resources Corp. (TSXV: ZNG) (OTC: GRLVF) (FRA: 3GE) ("Group Eleven" or the "Company") is pleased to announce the commencement of the next phase of drilling, and the results from an induced polarization ("IP") geophysical survey, at the Carrickittle prospect ("Carrickittle") at its 100%-owned PG West zinc project ("PG West"), Republic of Ireland.

"We are encouraged that the IP data seems to show a set of distinct fault structures parallel to known areas of mineralization," stated Bart Jaworski, CEO. "Specifically, the chargeability-high anomaly at Zone 2 is compelling given its strength and its extent beyond areas of historic drilling. We look forward to an exciting next phase of drilling."

Mobilization for drilling at Carrickittle commenced on Friday (February 19th) with a total of approximately 400 metres expected to be drilled at Zone 2. A larger subsequent drill program focussing on Zones 3 and 4, as well as, the one-kilometre strike extent to the north, is currently in planning stages and will be announced in due course. As previously stated, management aims to drill continuously for the remainder of 2021 with total metreage expected to be approximately 5,000 metres (fully funded), primarily at Carrickittle.

As previously announced, a recent trial IP survey at Carrickittle was followed up by a more comprehensive IP survey, focussing on Zones 1-3 (totalling 2,400 metres within four lines spaced approximately 50 metres apart and with 25-metre station spacing). This survey has now been completed and the 2D pseudo-sections have been inverted to allow interpretation.

Inverted resistivity and chargeability profiles (see Exhibit 1 and 2, respectively) have been interpreted by an independent consultant (Hernan Ugalde) and appear to show a number of distinct fault structures, generally trending in a north-west orientation along known areas of mineralization (Zones 1-4, respectively). Additionally, a chargeability-high anomaly on Line 1 appears to correspond with high-grade mineralization in Zone 1 and a more extensive chargeability-high anomaly on Lines 2-4 appears to correspond with Zone 2 (see Exhibit 1 and 3). 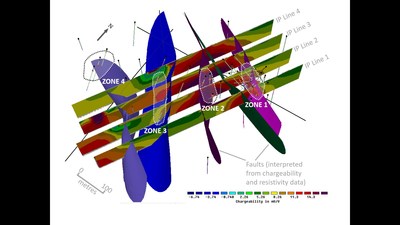 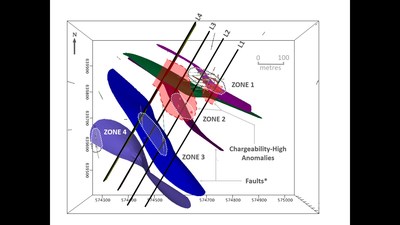 Carrickittle is hosted within the Company's 100%-owned PG West project in southwestern Ireland. PG West is situated within the Limerick basin, a geological feature which also hosts the Company's contiguous 76.56%-owned Stonepark project and Glencore's adjacent Pallas Green project (hosting the Pallas Green zinc-lead deposit1; see Exhibit 4). Carrickittle is situated along the 25-kilometre long 'Pallas Green Corridor', with the Kilteely prospect to the northwest and the Ballywire and Denison prospects to the southeast. 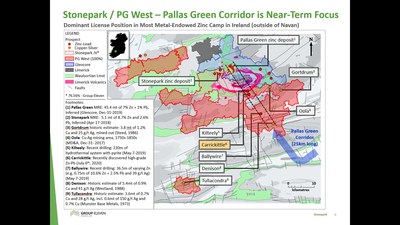 ON BEHALF OF THE BOARD OF DIRECTORS:
Bart Jaworski, P.Geo.
Chief Executive Officer