Use of this site indicates acceptance of the Privacy Policy and Terms of Use.
The information on this Website is not reliable and not intended to provide tax, legal, or investment advice. Nothing contained on the Website shall be considered a recommendation, solicitation, or offer to buy or sell a security to any person in any jurisdiction.
CEO.CA members discuss high-risk penny stocks which can lose their entire value. Only risk what you can afford to lose.
© 2016 - Pacific Website Company Inc.
@newsfile/positive-soil-sampling-results-significantly-increase ↻
0 online
Today This week
Search Subscribe
Members of @newsfile/positive-soil-sampling-results-significantly-increase

Over the last 80 years artisanal miners have discovered over 80 high grade gold veins hosted by a diorite intrusion and hornfels in adjacent sedimentary rocks within the project area. Recently, company geologists have discovered additional veins, a zone of replacement mineralization, and indications of potential porphyry-style mineralization on FenixOro's land package. The veins, many of which assay over 20 grams per tonne gold and as high as 146 grams per tonne gold, are meters to tens of meters apart and occur in east-west and northwest trending families. In several areas, gold-bearing stockwork mineralization crops out between the veins indicating potential for significant widths of mineralization.

A property-wide program of soil sampling on a 25 by 100 meter grid is being carried out to search for additional, non-outcropping mineralization in areas of vegetation and soil cover. Results from the first phase of the program in the Southeast Vein Area were reported in a press release dated July 23, 2020. That program delineated numerous new areas of vein potential and led to increased expectations for the soils program in the Main Vein Zone in the northwestern part of the property.

Figure 1 summarizes the geology and all soil results to date in the Main Vein Zone. The area has always been considered to be the highest priority drill target given the number, density, and high grade of the known veins. As seen in the Figure, the vein outcrop areas are characterized by multi-point soil anomalies of 100-1000+ parts per billion gold. The newly received soil results illustrate the fact that most areas in between the vein families are also characterized by anomalies of similar magnitude. To date nineteen such areas with no previously known veins have been delineated with soil anomalies which are very similar to those developed over known veins.

FenixOro VP Exploration Stuart Moller stated "We anticipated strong soil results over the known veins that could be used as a baseline for interpreting soil results in virgin areas. The major new anomalies between and adjacent to the known veins were a tremendous surprise and as a result we now see greatly enhanced potential for the vein/stockwork model."

The planned holes were designed to be drilled at 45-60 degree angles from the surface, with each intersecting multiple known veins and areas of intervening stockwork mineralization. An analysis of vein outcrops, mine dumps, tailings, etc. along with topography indicates that very few of the new soil anomalies are likely to be the products of soil contamination. Therefore, most of the nineteen are considered to be newly discovered areas of near-surface mineralization, probably additional vein and/or stockwork zones.

The drill program will not have to be modified significantly to test the best of the new areas as most are immediately adjacent to known veins. The impact will be in the number of veins intersected by each hole and the total width of the mineralized corridors, two of which now appear to be in excess of 300 meters. Additional areas of potential will be addressed with the 20% of the program samples yet to be received from the laboratory and future expansions to the soil grid. 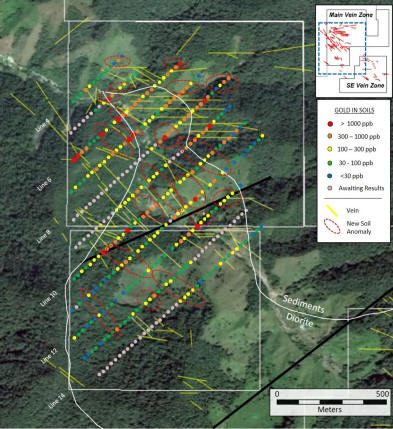 To view an enhanced version of Figure 1, please visit:
https://orders.newsfilecorp.com/files/6188/62104_fenix2.jpg

FenixOro Gold Corp is a Canadian company focused on acquiring gold projects with world class exploration potential in the most prolific gold producing regions of Colombia. FenixOro's flagship property, the Abriaqui project, is located 15 km west of Continental Gold's Buritica project in Antioquia State at the northern end of the Mid-Cauca gold belt, a geological trend which has seen multiple large gold discoveries in the past 10 years including Buritica and Anglo Gold's Nuevo Chaquiro and La Colosa. As documented in "NI 43-101 Technical Report on the Abriaqui project Antioquia State, Colombia" (December 5, 2019), the geological characteristics of Abriaqui and Buritica are very similar. The report also documents the high gold grade at Abriaqui with samples taken from 20 of the veins assaying greater than 20 g/t gold. Abriaqui has not yet been drilled but surface and underground geological mapping and sampling as well as a preliminary magnetometry survey have been completed. The property is drill-ready pending finalization of the government permitting process.

Fenix's VP of Exploration, Stuart Moller, led the discovery team at Buritica for Continental Gold in 2007-2011. The Buritica Mine currently contains measured plus indicated resources of 5.32 million ounces of gold (16.02 Mt grading 10.32 g/t) plus a 6.02 million ounce inferred resource (21.87 Mt grading 8.56 g/t) for a total of 11.34 million ounces of gold resources. Buritica is scheduled to commence production in 2020 with annual average production of 250,000 ounces at an all-in sustaining cost of approximately US$600 per ounce. Resources, cost and production data are taken from Continental Gold's "NI 43-101 Buritica Mineral Resource 2019-01, Antioquia, Colombia, 18 March, 2019"). Continental Gold was recently the subject of a takeover by Zijin Mining in an all-cash transaction valued at C$1.4 billion.

To view the source version of this press release, please visit https://www.newsfilecorp.com/release/62104