9 May 2022, 08:35
@nasdaq FenixOro Discovers Multiple Gold-Silver Veins in the Southern Zone and a New Style of High Grade Mineralization in the Central Area $FENX $FDVXF $8FD

Use of this site indicates acceptance of the Privacy Policy and Terms of Use.
The information on this Website is not reliable and not intended to provide tax, legal, or investment advice. Nothing contained on the Website shall be considered a recommendation, solicitation, or offer to buy or sell a security to any person in any jurisdiction.
CEO.CA members discuss high-risk penny stocks which can lose their entire value. Only risk what you can afford to lose.
© 2022 - CEO.CA Technologies Ltd.
@nasdaq/fenixoro-discovers-multiple-wide-mineralized-zones ↻
0 online
Today This week
Search Subscribe
Members of @nasdaq/fenixoro-discovers-multiple-wide-mineralized-zones

by @nasdaq on 25 Jan 2022, 09:00
FenixOro Discovers Multiple Wide Mineralized Zones up to 20 Meters in Width at Abriaqui

FenixOro VP Exploration Stuart Moller noted, “From the start of the program, one of the objectives at Abriaqui has been to identify “Buritica style” mineralization – high grade gold in the cores of the veins surrounded by thicker zones of lower grade mineralization. An ongoing program of in-mine channel and infill core sampling now shows that there are coherent blocks of this style of mineralization on several veins which are likely to increase in size with more infill drilling. These wider zones tend to reduce the overall gold grade, however in similar deposits this is typically more than offset by additional tonnage and ounces, resulting in the potential for significantly reduced mining costs in wider stopes. Given the similar geology and structural setting throughout the property, we believe that as exploration continues, it is highly likely that more of these wider zones will be discovered”

A program of channel sampling in the small mines at Abriaqui in mid-2021 provided an interval of 11.4m @ 6.08 g/t gold from a crosscut on the Santa Teresa vein system (see press release dated August 5, 2021). The interval consisted of several veins each less than one meter in width separated by variably developed zones of gold-bearing veinlets. Subsequent channel sampling and infill sampling from earlier drill holes have defined additional wider zones of mineralization on four veins. Table 1 lists six zones which average 11.9 m in thickness @ 3.77 g/t gold. Figure 1 shows the zones in map view and Figure 2 shows many of them in cross section.   Figure 2 also shows the originally reported widths and grades along with the new zones expanded by the infill sampling results.

Three of the intervals occur in the same area at depth on the Romperopa 1 and Footwall vein sequences. Two intercepts on Romperopa 1 define a block of >75 meters in length and a minimum 200 vertical meters (open up and down) which averages 15 meters in width. The Footwall vein intercept is open at depth and the near surface intercept on Santa Teresa is open in both directions along strike.

All of the areas of wider mineralization in Table 1 are hosted by the diorite rock which is significantly more competent and less fractured than the sedimentary sequence. No specific mining-related studies have been completed however the available data on rock quality (core recovery and RQD - a measure of rock fracturing) indicate that the zones may be candidates for future bulk underground mining techniques. Unit mining costs for these techniques tend to be substantially lower than those for thinner veins.

FenixOro Gold Corp is a Canadian company focused on acquiring and exploring gold projects with world class exploration potential in the most prolific gold producing regions of Colombia. FenixOro's flagship property, the Abriaqui project, is the closest project to Continental Gold's Buritica project. It is located 15 km to the west in Antioquia State at the northern end of the Mid-Cauca gold belt, a geological trend which has seen multiple large gold discoveries in the past 10 years including Buritica and Anglo Gold's Nuevo Chaquiro and La Colosa. As documented in "NI 43-101 Technical Report on the Abriaqui project Antioquia State, Colombia" (December 5, 2019), the geological characteristics of Abriaqui and Buritica are similar. Since the preparation of this report a Phase 1 drilling program has been completed at Abriaqui resulting in a significant discovery of a high grade, “Buritica style” gold deposit. A Phase 2 drilling program has recently commenced.

FenixOro's VP of Exploration, Stuart Moller, led the discovery team at Buritica for Continental Gold in 2007-2011. At the time of its latest public report, the Buritica Mine contains measured plus indicated resources of 5.32 million ounces of gold (16.02 Mt grading 10.32 g/t) plus a 6.02 million ounce inferred resource (21.87 Mt grading 8.56 g/t) for a total of 11.34 million ounces of gold resources Buritica began formal production in November 2020 and has expected annual average production of 250,000 ounces at an all-in sustaining cost of approximately US$600 per ounce. Resources, cost and production data are taken from Continental Gold's "NI 43-101 Buritica Mineral Resource 2019-01, Antioquia, Colombia, 18 March, 2019"). Continental Gold was recently the subject of a takeover by Zijin Mining in an all-cash transaction valued at C$1.4 billion.

Drill core sampling is done in accordance with industry standards. The HQ and NQ diameter core is sawed, and half core samples are submitted to the laboratory. The other half core along with laboratory coarse reject material and sample pulps are stored in secure facilities on site and/or in the sample prep lab. Following strict chain of custody protocols, the samples are driven to the ISO 17025:2017 certified ALS Laboratory sample preparation facility in Medellin and ALS ships the prepared pulps to their assay laboratory in Lima, Peru. As of November, 2021 similar procedures have been utilized by the ISO 9001:2015 certified Medellin branch of Ontario-based Actlabs. Blanks, duplicates, and certified reference standards totaling 15% of the total samples are inserted into the sample stream. To date, no material quality control issues have been detected. Gold is analyzed by fire assay with 50 gram charges for grades in excess of 10 grams per tonne and the additional elements are analyzed by ICP with appropriate follow-up for over- limits.

Reported grade intervals are calculated using uncut gold values. Maximum sample length is one meter. Intervals which include multiple samples are calculated using the full geologic interval of mineralization at a 1 g/t gold external cutoff grade and are not subject to specific rules for cutoff grades within the zones. As such, quoted thickness and grade of these intervals do not necessarily represent optimized economic intervals in a potential future mine. Reported sample and interval widths in drill holes are based on lengths of individual samples in core and do not necessarily represent true widths of mineralization. True widths will sometimes be less than the quoted interval lengths. Intervals defined by channel samples represent true widths of mineralization in vertical veins.

There are currently no NI 43-101 compliant resources or reserves in the project area. The analysis of drill and channel results is intended to estimate the potential for future resources which will require significant additional drilling to define. 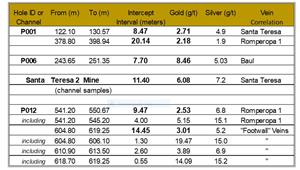 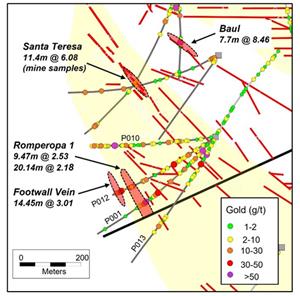 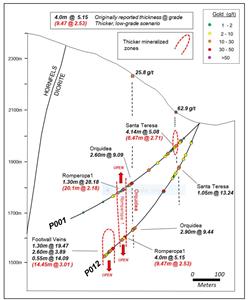