Use of this site indicates acceptance of the Privacy Policy and Terms of Use.
The information on this Website is not reliable and not intended to provide tax, legal, or investment advice. Nothing contained on the Website shall be considered a recommendation, solicitation, or offer to buy or sell a security to any person in any jurisdiction.
CEO.CA members discuss high-risk penny stocks which can lose their entire value. Only risk what you can afford to lose.
© 2016 - Pacific Website Company Inc.
@nasdaq/scottie-announces-mobilization-of-field-crews-to-cambria ↻
0 online
Today This week
Search Subscribe
Members of @nasdaq/scottie-announces-mobilization-of-field-crews-to-cambria

VANCOUVER, British Columbia, June 23, 2020 (GLOBE NEWSWIRE) -- Scottie Resources Corp. (“Scottie” or the “Company”) (TSXV: SCOT is pleased to kick off its fully funded exploration program for 2020 with the mobilization of field crews and equipment to Stewart, BC. Starting at the southern part of the Golden Triangle, crews will conduct a soil sampling and geologic mapping program on the polymetallic Cambria Project located 3 km east of Stewart, BC.  The Cambria Project consists of four properties (Black Hills, Ruby Silver, Bitter Creek, and Portland Claims) that are bordered to the east by Ascot Resources “Red Mountain” Project, and to the north by Pretium Resources.

"With the safe mobilization of our crews and equipment, we look forward to executing a robust summer season starting at the southern end of our 24,000 ha claim package and working our way up to the Scottie Gold Mine" said Brad Rourke, President and CEO. "Our team achieved an excellent 2019 field season, which included the discovery of multiple new high-grade surficial targets followed by an exceedingly successful drill program. We now enter the 2020 field season, well-funded with an experience crew and a multitude of high priority targets to follow up on.”

Thomas Mumford, Ph.D., P.Geo and VP Exploration of Scottie, a qualified person under National Instrument 43-101, has reviewed the technical information contained in this news release on behalf of the Company

All of the Company’s properties are located in the area known as the Golden Triangle of British Columbia which is among the world’s most prolific mineralized districts.

Further information on Scottie can be found on the Company’s website at http://www.scottieresources.com and at www.sedar.com, or by contacting Bradley Rourke, President and CEO at (250) 877-9902 or Rahim Lakha, Corporate Development at (416) 414-9954. 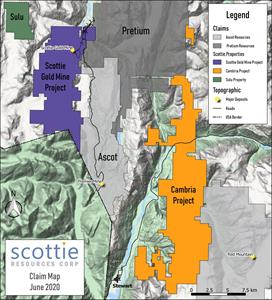